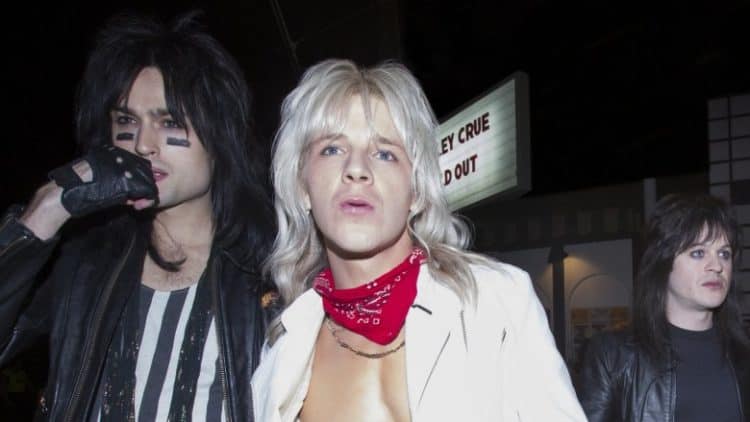 If you grew up in the era of Motley Crue then you know full well that they were never one of the more innocent and cuddly bands out there. They had more than their fair share of dirt and ironically the name of the Netflix movie, Dirt, seems to be a lot cleaner than the band’s actual history. The story did go on by stating that it was true, but those of us that still like to use words like ‘reason’ and ‘logic’ can see past such a proclamation and come to our own conclusions. Unfortunately the conclusions that we can come to when it has to do with the Motley Crue movie tend to tell us that a lot of stuff was either glossed over or changed for the purpose of the movie itself.

You kind of expect this with movies since they’re there to entertain and not always tell things the way they actually were, but then again there is something to be said about some realism. There are a few things in the movie that you might have seen, if you watched it, that didn’t sit right with you. Here are just a few of those facts.

Vince Neil was not their first singer

The movie definitely wanted to skirt around the issue a bit when it came to highlighting any singer that wasn’t Vince Neil since the whole legacy of the band is heavily dependent on showing that Neil was in fact a big part of their overall success. But the movie doesn’t even go into the first singer that came on to work with the band, somehow seeing fit to omit this part as they moved on so quickly. In reality the band did have a couple of people that were doing them a solid by getting on the mic, though nothing ever seemed to fit and even the guy known only as O’Dean wasn’t liked by the band, especially by Sixx or Mars since he irritated them both to no end. He had a great voice apparently but was possessed of a couple of weird habits and a body that Mars likened to that of a fat hippie. Some of Mars’ opinions did make it into the movie likely because they were powerful enough to use as a dramatic tool, but apart from this the whole idea was kind of rushed.

In the movie you see Lee and Sixx in a chance encounter in a diner after a show. The younger Lee introduces himself and the two begin to talk in an easy manner as though they’ve known each other for a while. Unfortunately this story is pretty different since Sixx already knew of one another and had met through another person that had played for the same band that Lee had been in and Sixx had auditioned for in the past. In fact this mutual friend even ended up playing for an up and coming version of Motley Crue only to quit and leave the two to find a new guitarist that could help them out. So it wasn’t a meeting that was ‘just destined to happen’, it was something that likely would have happened eventually since both men did know something about the other and would have likely gravitated towards one another at some point and time.

According to the movie getting Vince to actually agree to come on board wasn’t all that hard. He chats with Tommy Lee, has a quick interior debate about the matter, and then it just simply happens. In the movie his girlfriend, Lovey, is the biggest obstacle since she doesn’t like how hard the band plays but is eventually swayed, as a lot of women are, but the ‘magical’ sound of the quartet as she begins to fall in love with it. Yeah, and if heavy metal made all women weak in the knees it would be a universal solvent that would have dominated the airways by now. In reality Vince was a very tough character to convince and he even missed his first audition for the band. This was what led them to use O’Dean on vocals until Neil finally came around. Lovey however was just as against the music in real life but, unlike the movie, she didn’t show any signs of turning around in her appraisal of the music. But since he’d been feeling slighted by his former band Neil decided to go ahead and join despite her dislike.

It was kind of a trip to see Iwan Rheon from Game of Thrones as Mick Mars, but it did work fairly well since he’s already been seen to play a great character that can present a very off-putting manner and still possess a hint of charisma to him. But his role as the booze-swilling elder of the band was taken kind of seriously as he was seen to state that he respects women and refused to take part in the debauchery kind of laid it on a bit thick according to what really happened. In real life he’s been the most virtuous member of the group, but at the same time it’s kind of easy to do so since he’s a bit older than the other guys and has had a slew of health problems. But be that as it may Nikki Sixx made it pretty clear that no matter what gets said that Mick has had his fair share of the fun throughout the years, but to get the dirt on that you’d have to talk to Mick.

So it might have been an entertaining movie, but The Dirt was anything but spot on with its facts.