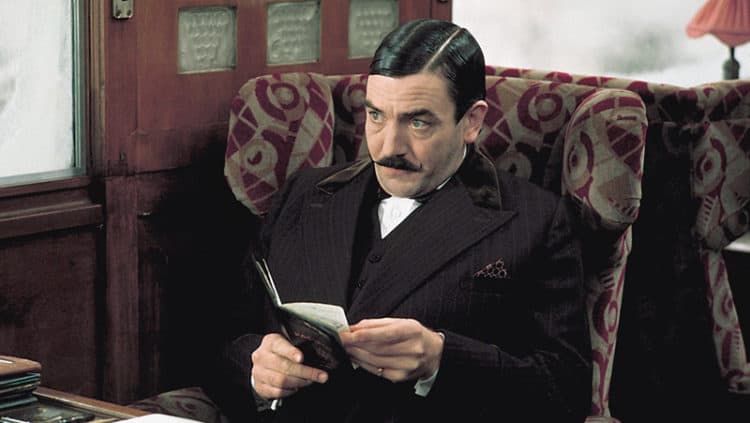 The moment you hear ‘Agatha Christie’ you should immediately be thinking mystery, intrigue, possibly even deception most foul. In her day Agatha Christie was the foremost novelist when it came to such subjects and her stories have lived on today as some of the best ever created. The films that were spawned by the stories are a bit dated and in fact some of them have been remade and updated just enough to entertain the audiences of today, but the overall content has been kept the same in order to preserve the tale. As you can imagine, Christie’s early attempts were rejected until she changed the titles and edited her work so that those she was seeking to publish with would accept them. Once she became known as a writer however things began to take off and her writing career flourished. Since then there haven’t been a lot of writers that can come close to her style, as she was quite unique in the literary world.

Here are a few of the movies that were based upon Agatha’s stories.

5. Murder on the Orient Express

A man as obsessed with truth and balance as Christie’s main detective, Hercule Poirot, is often tortured when he must finally live with a lie. But in the case of this movie there’s really no other way to go. John Cassetti, the victim of a fatal stabbing aboard the train, is a man that deserves to die after what he’s done, though the quest for the truth still consumes Poirot since he is a person for which the ends do not always justify the means. When it’s discovered that every single person on the train was at fault for killing Cassetti however it becomes obvious that he must make a decision as to condemn them all for the death a man that deserved it, or let them go.

‘Crooked’ is putting it mildly when you talk about this house and its many affairs with those that reside in the walls. When the inspector is brought in to find out just who killed the patriarch of the family he’s stymied left and right even when evidence is presented that seems to make it obvious just who the killer is. Of course Agatha is too masterful to really lead anyone in a straight line right to the killer, or is she? The innocuous individual that you suspect and then don’t because of mitigating circumstances turns out to be the one that you should have been keeping your eye on the most since they sometimes turn out to be the most devious of all of them.

3. Death on the Nile

This is another Hercule Poirot story in which there are multiple suspects and one very dead individual.  The woman in question is someone that few people that are involved in the story really like and yet she’s not a killer, though she isn’t exactly the favorite of anyone. For all that however she’s an innocent for the most part in that she was killed because of the machinations of a couple that thought to swindle her by having the man she wooed marry her and then kill her, staging it to look like someone had murdered her in cold blood before taking her fortune and then marrying the woman she’d ‘stolen’ him from.

2. Witness for the Prosecution

It’s pretty obvious that Agatha loved twisting her stories to suit her needs when it was necessary. This particular movie has to do with the case of a man that is being held for the murder of an older woman that had become quite taken with him. He tries and tries to profess his innocence, but his wife eventually gets on the stand and admits that he did indeed tell her about the murder he’d committed, which is about the same as tying the noose around his neck. When evidence is given however that reverses the verdict to not guilty he admits to what he did, and attempts to run off with a younger woman, angering his wife, who then stabs him to death in a fit of rage. Ah yes, the twists are great when it comes to these stories.

1. Evil Under the Sun

It’s a foregone conclusion when Hercule Poirot is on the case that things are going to be solved and the guilty party, or parties, are going to be exposed. Agatha seemed to like the type of gatherings that put a large number of suspects together with conflicting stories that would make them all seem guilty at some point until Poirot started pointing out inconsistencies that let some people off the hook and kept others wriggling until the time came to finally explain his theories on who did it and possibly why.

She was one of the greatest mystery writers without a doubt.