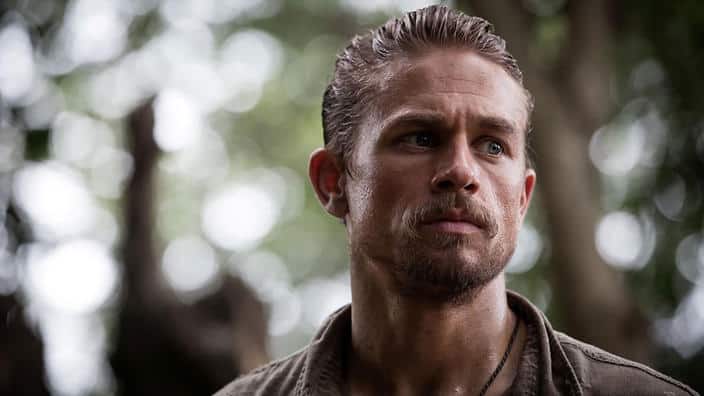 Charlie Hunnam was apparently something of a bad boy in school since he had to take his exams from home due to fighting that had become far too regular. Perhaps that’s what he pulled from when it came to his role as Jax Teller in Sons of Anarchy, since he’s seemed like an aggressive character for a good part of his career. In some ways his TV career has been far more memorable than his movies, but if you really watch his movies he seems to give the same looks and speaks in the same way as Jax occasionally, which could be why he doesn’t earn such high regard all the time. His acting is solid enough and he’s an individual that people like to see, but his mannerisms don’t seem to change as much. He has a lot of potential and has shown it throughout his career so far, but getting past his SOA roots seems to be a little difficult.

Here are five of his best movies so far.

As far as ghost stories go this one seems almost prim and proper compared to many, but it’s no less diabolical for all that. When the Sharpe’s manage to lure Edith into a marriage to Thomas and spirit her away to Crimson Peak things begin to happen eventually that make her wonder just what she’s married into. Ghosts appear throughout the mansion, she finds evidence that the Sharpe’s have been pulling a ‘marry and kill’ scheme to gain money for Thomas’ inventions, and she’s next. Thanks to her friend Alan and with some luck Edith and Alan escape the mansion after Thomas and his homicidal sister, Edith, are both killed.

Some things that are presumed lost need to stay that way it would seem. But for brave explorers like Fawcett things just aren’t that simple since he was convinced that the lost city needed to be found and that he could do it. The attempt was made and he was successful in finding something, but he was still ridiculed when presenting his findings. As the years passed by and he was eventually granted another chance he took his eldest son with him into the jungle, where they were eventually accepted by the tribe. The only difference this time was that he didn’t return, sending only his compass as he said he would in order to prove that the city existed.

3. King Arthur: Legend of the Sword

The tale of King Arthur has been told so many times and in so many different ways that unless it’s an epic from the opening minute to the finish people aren’t bound to stick around. This movie had more to offer than most people cared to see since it did offer a slightly different take on the story and carried it off in a different direction. It also alluded to the overall power of the sword, Excalibur, and showed that it was the true force that, in the right hands, could decide the fate of a kingdom. It also showed Arthur as a streetwise individual that had been forced to live on his wits throughout the years and didn’t really desire the role of king, which of course means that he’s the right person anyway.

For some people freedom is more than just a word, it’s something that can’t be taken from them without a serious fight. This remake of the 1973 film didn’t seem to get a lot of attention but it’s still a great story since it not only details the spirit of a man that refuses to be broken down, but also the willingness of the human spirit to either accede to the current surroundings or to rail against what is thought to be inevitable. There are a lot of people that would gladly give up after the punishments that the men in the film had to go through, but some are still willing to stand up and refuse defeat no matter what happens.

Some people seemed to have a hate/love relationship going on with this movie that caused them to watch it but still talk trash about it. In all honesty the idea was great since it painted a picture that the threat to humanity didn’t come from the stars, but from somewhere much closer that was harder to guard against. The plot holes are many and the inconsistencies abound, but the overall story of defending the world’s borders from something that human beings never knew about until it was too late is one that is both terrifying and mystifying at the same time. Plus, the battles between the jaeger’s and the kaiju were well done despite being few in number. Of course if we’re being honest the cost of one jaeger in the movie world and in the real world when it comes to production is pretty high, so what we got was pretty impressive.

Charlie’s getting better with each movie it seems.