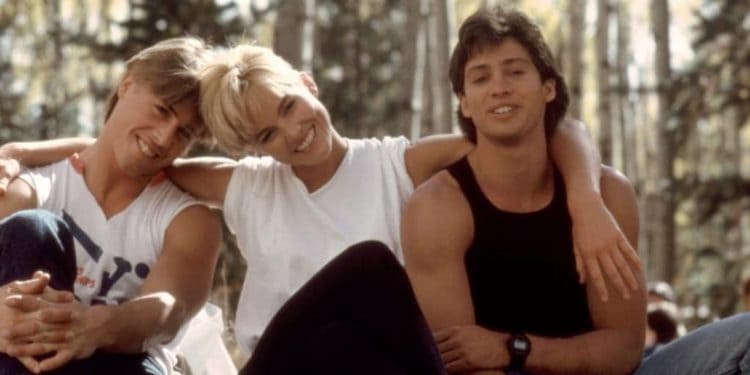 If you are a fan of athletics and gymnastics, then you will probably enjoy movies that focus on these activities. Gymnastics is the theme for movies from all genres, including biographical dramas, romantic comedies, sports films, and much more. This theme is ideal for storylines that include the struggle for gymnasts to achieve their dreams or the personal and physical challenges they have overcome to become successful in their chosen sport. Of course, a highlight of these films for fans of gymnastics is the impressive gymnastic content. There are hundreds of movies that feature gymnastics in some way, and which each person thinks is the best is a matter of personal opinion. However, here are five of the best gymnastics movies that you should consider watching.

‘Peaceful Warrior’ is a 2006 drama film that is directed by Victor Salva. It is based on the novel ‘Way of the Peaceful Warrior’ by Dan Millman and adapted into a screenplay by Kevin Bernhardt. The film is about a young gymnast, Dan Millman, whose dreams are crushed when he shatters his leg in a motorcycle accident. He needs the help of a spiritual guide to help him get back on form and starts to take tutorage from Socrates. The gymnast overcomes adversity and rebuilds his strength to return to the team at U.C. Berkeley. He overcomes the odds and attends the United States Trials for the Olympics, where his trial is successful and he lands a place on the team. At the end of the film, Dan takes his turn on the rings and performs perfectly, but the film cuts out before the outcome is shown. However, there is a postscript at the end that says that the Berkeley Gymnastics Team won their first National Title. The lead role is played by Scott Mechlowicz, while Socrates is portrayed by Nick Nolte. Others who star in this film include Amy Smart, Tim DeKay, Ashton Holmes, Paul Wesley, B.J. Britt, and Agnes Bruckner. This is an example of a film that was not commercially successful on its release but grew a fan base and garnered praise at a later date.

‘A Second Chance‘, originally called ‘A Second Chance’, is a heart-warming 2011 gymnastics-themed family movie. It was both written and directed by Clay Glen, and starred Nina Pearce in the lead role, alongside Adam Tuominen and Emily Morris. This Australian family movie is about a young gymnast and her coach who overcome adversity to get to the National Australian Gymnastics Squad. This feature film has been sold in over 30 countries and translated into five languages. The general consensus of critics was that this movie had a generally good storyline if a little predictable. The gymnastic content and acting skill in the film were also praised.

‘American Anthem’ is a sports drama film that was released in 1986. It was directed by Albert Magnoli and co-written by Evan Archerd, Jeff Benjamin, and Susan Williams. The film is about a former football player who wants to become a gymnast and train for the United States Olympic gymnastics team. The lead role is played by former gold-medalist Mitch Gaylord who was previously part of the United States men’s gymnastics team and took part in the 1984 Summer Olympics. The female lead who starred opposite him was Janet Jones. Others who starred in this film include Tiny Wells, Michael Pataki, Patrice Donnelly, R.J. Williams, John Aprea, Michelle Phillips, and Katherine Godney. This film was initially a flop at the box office as it grossed less than $5 million from a $7 million budget. However, it is now considered a cult classic and as symbolic of the 1980s.

‘Full Out’ is a sports biographical drama film that was released in 2015. According to Ranker, this is the second best gymnastics movie of all-time. Also known as ‘Full Out: The Ariana Berlin Movie’, it is based on the life of American gymnast Ariana Berlin. This gymnast was famous for making a comeback in competitive gymnastics following a serious car accident. The film was directed by Sean Cisterna and the lead role of Ariana Berlin was played by Canadian actress Ana Golija. At the 2016 Canadian Screen Awards, Golija was nominated for an award for the Best Performance in a Children’s or Youth Program or Series. Although this was a television movie, it received great critical acclaim and is now considered one of the best gymnastics films. Others who starred in the film include Jennifer Beals, Art Hindle, Jake Epstein, Ramona Milano, Trevor Tordjman, and Lamar Johnson.

According to Reel Rundown and many other movie ranking sites, ‘Stick It’ is widely considered the best gymnastics movie of all-time. This gymnastics movie was written and directed by Jessica Bendinger, who also wrote and directed the 2000 cheerleading comedy movie ‘Bring It On’. ‘Stick It’ is a 2006 teen comedy film that focuses on the world of team gymnastics. It is about a girl who was once considered one of the most talented gymnasts in the United States, before becoming a tomboy and packing in the sport for biking. When she runs into trouble with the law, the judge forces her to return to competitive team gymnastics due to the regimented nature of the training. The lead role is played by Missy Peregrym. Others who star in this movie include Jeff Bridges, Maddy Curley, Vanessa Lengies, Nikki SooHoo, Kellan Lutz, and John Patrick Amedori. From a budget of $20 million, this movie grossed just under $32 million.