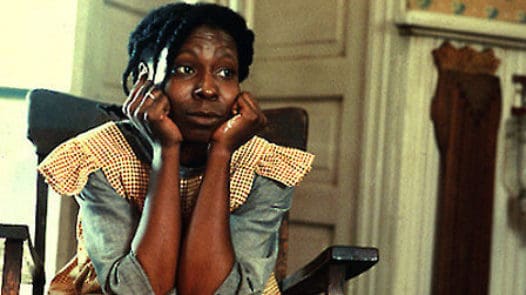 Whoopi Goldberg is a great actress but later in life it seems that she’s gone on to become someone that really wants to keep her voice ascending to a different level in order to be heard. There’s nothing wrong with that really since those that love listening to her might be impressed with some of the things she says. But when it comes to actors and politics and their views on it the idea is that they need to know what they’re talking about, which she does thankfully in some cases. Her movie career is something that was kind of up and down it would seem, showing a great amount of promise only to come out with a few movies here and there that didn’t seem worth talking about quite as much. But Whoopi is a woman that’s been all over the place it would seem with her career, never able to really hold still and just focus on one thing. That’s usually a good and a bad thing depending on where she puts that energy.

Here are some of the best movies from her career.

Playing the role of a mobster’s girlfriend seems like an odd role for her but it worked well enough when she was witness to a murder that could have gotten her snuffed out as a witness. Where they put her up however was somewhere that almost seemed like a joke since she was a nightclub singer and they put her into a convent. Not only was the placement something of a controversy, in the film, but it was also hilarious since it’s almost like putting a fox in the hen house so to speak since her ways, her language, and her mannerisms were bound to cause a bit of change in the convent and rub off on a few of the sisters now and again.

It would seem that Whoopi really enjoys changing people’s minds with her acts since in this one she’s brought in to be a little white girl’s nanny, but in the process she starts to change the minds of the people around her as she and the girl’s father eventually start to develop feelings for one another. It’s very confusing for the child since she doesn’t understand the terminology that adults used back in those days concerning black and white people and used what she felt was appropriate only to be looked at and spoken to with disdain following her words. Throughout the film however there are many similar themes that take place as the story unfolds.

This is another film in which her no-nonsense manner comes into play and her character changes the mind of another person as she acts in a manner that is forthright and forthcoming. The film is about a woman that has lost a child due to Sudden Infant Death Syndrome and is obviously grieving. After a trip to Jamaica she hires on a nanny for her young son to help out with his needs as she and her husband are going through a great deal of stress at the time. At first the son doesn’t care for her presence and sees her as the enemy, but eventually he warms to her and they become good friends.

This is another film in which she is kind of a shady character, trying to pass herself off as a medium when in reality she’s a con artist. When Sam, who was killed by a supposedly random thug but is now a ghost, comes to her for help she thinks he’s going crazy at first, but upon listening to him begins to realize that he’s real and after a while she agrees to help him. Her efforts to help his girlfriend are rebuffed obviously since the girlfriend thinks she’s a fraud, but when Sam speaks through her matters get sorted out quickly and they eventually come to find that the thug was hired by his best friend.

The level of abuse in this film is simply horrific, but the spirits of the women that endure it and somehow survive to carry on the tale and live their lives is nothing short of inspirational. Upon watching this movie you might actually feel a tear drop from your eye since it’s that tragic and that hard to stomach, but the acting is so spot on that it’s hard not to be impressed by the manner in which the cast goes about acting out the story. Simply reading the plot is enough to make your blood boil since Celie, Nettie, Shug, and anyone else made into a victim for even a short time deserve the lives they finally get to live near the end.

Whoopi Goldberg is a unique person at times, but she’s a good actress.