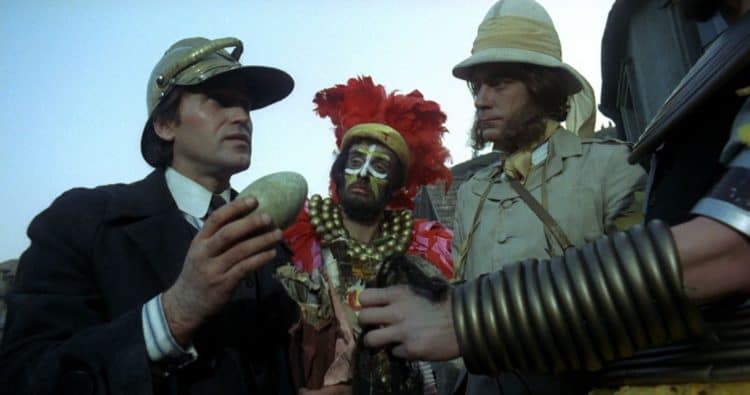 Looking back at 70s movies it’s kind of interesting to see what we were amused by in that era and how the effects and visuals really managed to keep us in awe or at least keep us entertained for a while. Obviously throughout the years the effects have gotten better and the story lines have changed just enough to go with the times. But overall we can’t help but remember that these movies and those that came before them were the bedrock that what we enjoy as entertainment now depended on. Sure when we watch these movies we might think that it’s funny to realize just how much we didn’t know about the special effects and how the visuals made the movie. But back then it didn’t really matter since the story was enough to carry the thing and the effects were just an added bonus.

Here are a few of the best and most visually stunning movies from the 70s.

You had to know that one of the most epic movies of all time would be on this list, though it’s kicked to the back just for the sake of realizing that it could have been a massive flop as well. Thankfully George Lucas worked tirelessly to make this into what it would eventually become, and while the Star Wars fans of old have hemmed and hawed at the new movies that have emerged, those of us that happen to like the development the story has gone through are still enjoying it today. Back then the effects were a lot more low-budget, but at the very least they were entertaining, and the visuals we were given were more than enough to make us think of new worlds and adventures.

The idea of war being hell and the fact that it drove some people out of their minds was inescapable during this era and it was shown on film to be something that drove a lot of men insane. In this movie we’re given a pretty good look at the atrocities that went on during one of the worst and bloodiest wars in recent history and are also given a great deal of insight as to what it really men for those on the ground and those that came back with the type of scars that can’t be seen but are still capable of messing a person up for a lifetime to come. As war movies go this was one of the more disturbing ones, though it’s also a classic.

Do you think anyone could have predicted just how popular this movie would get, and then how horrible it would eventually become? In truth the Alien franchise has hit some highs and some lows, but it’s never really equaled the fright that was generated by the first movie. A lot of people still feel that this first movie was the one that started all the terror since up until this point we’d never seen anything like the creatures that were presented. Acid blood? Keeping a host alive while suction-cupped to their face? And then, the truly nightmarish part, bursting through a person’s chest like some sadistic jack in the box, that was movie gold.

2. Monty Python and the Holy Grail

If this movie was any cheesier it would qualify as a dairy product, but all in all it’s this very quality that helped to make the movie what it’s become today, a legend among fans that will still reference the movie in a variety of ways and will gladly quote right from it line for line. This is the quality that some movies have, they inspire people to laugh and in doing so they job a person’s memory more often than not when a quote is needed or a funny moment simply seems to demand remembrance. Throughout the years this movie has remained a classic and it feels safe to say that it might stay that way for some time to come.

Almost every movie is going to endure some criticism but thankfully this one still stands above the remake that starred Johnny Depp since it was a little more true to the feel and nature of the original story, or so one opinion might state. The visuals in this movie were nothing short of grand since walking into a vast room where everything is edible, for the most part, seems like a child’s dream come true. Of course if a person was clued in to what the chocolate river really was they might get a little green around the gills since not only was it kind of rancid, but the smell apparently was enough to gag a person when on set.

The 70s were a simpler time in movies as far as effects go, but quite honestly they were still a hallmark moment for the film industry.