Home
Entertainment
The History and Evolution of the U.S. Quidditch Cup 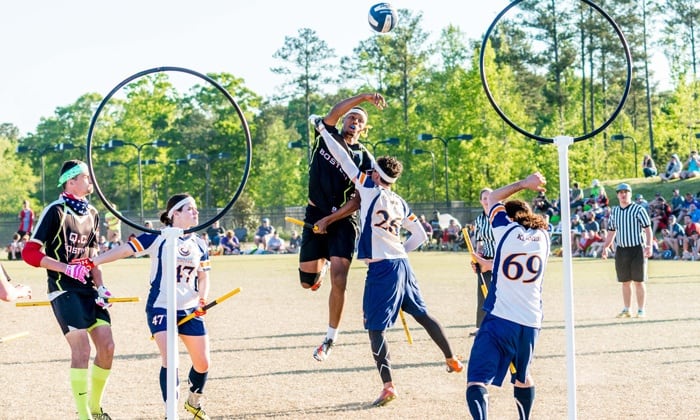 One has to wonder if J.K. Rowlings ever imagined that one small part of her creation would ever go this far. According to Hanna Furness of The Telegraph Rowlings has actually admitted that the sport was created after an argument with her boyfriend, and thus did one of the most notable parts of the Potterverse come together. Obviously the sport isn’t bound to be played with real magic but it does feature broomsticks, elevated hoops, and a very competitive bunch of athletes that have, since its inception in 2007, been quite dedicated to continuing a game that was fictional to begin with but has become something of favored pastime for many.

Now if you’ve ever watched Harry Potter you’ll know that in the Potterverse, Quidditch can be a rather dangerous game. In the real world however there are plenty of rules about contact and there aren’t any heavy, flying balls that are designed to take a person off their broom. Plus, the contestants aren’t flying at high altitudes or high speeds that could cause serious bodily injury. Instead, the rules are about the same, as are the positions, it’s simply kept on the ground and there are a few other things you might need to know and identify since each different position is marked by a different article of clothing that says who and what they are.

Quidditch was brought to US colleges in 2007 and was held initially at Middlebury College in Vermont. It did manage to travel to Vassar College as well and since that point has been traveling to various other places around the US. At this point there are about 70 teams, or more, that are engaged in this sports and they tend to engage in group play. The top teams from the group will eventually be advanced to bracket play as the season progresses.

As of 2015 the International Quidditch Association became a very big thing and has been spreading ever since. For a fictional game that came into being from a spat between the author and her boyfriend this has certainly turned into a popular phenomenon. In fact if you look around in pop culture you might see that Quidditch has been used in other areas as well as the Potter movies. It’s been given the treatment of being associated with geeks and nerds as are many things that aren’t fully understood by everyone, but to those that have embraced the game it’s become something that is both pure in form and is used as a way for people to come together and create something meaningful that fosters communication, community, and a general feeling of goodwill among the competitors.

In a way this games is almost like watching a toned-down version of something between rugby and soccer, just with broomsticks. The overall fitness level required for the sport is most definitely on part with many other sports since each individual on the team has their own set assignment and job to do and each of them has to be fully aware of the entire field at the same time. The type of endurance that is needed for this sport is pretty high since the contestants are in constant motion and the pace of the game is rather quick and doesn’t let up until the final whistle blows. While there are obvious breaks now and again to allow contestants to breathe the overall feeling is that the game is meant to be played in a very quick manner. Some folks might have a hard time wrapping their heads around the idea and even thinking as to why this sport would even be popular. Well, you’d have to ask the participants since quite honestly they’re the ones that are truly dedicated to keeping this sport alive and moving forward on a yearly basis.

Overall Quidditch is something that you can’t help but think looks like fun and might actually be a blast so long as you’re in good enough shape and can understand just how to play and how to fulfill your role on the team. In some ways it would seem that this sport demands more than others and is a great deal more high-energy than some but also safer than many. There’s no doubt that injuries do occur from time to time but listening to the various people that have put in their two cents about the sport it sounds as though the people that participate are there to have a good time and to experience a level of unity that is not typically felt with other sports on a regular basis. The propensity for injury is still there but it seems low unless someone happens to be willing to injure another person on purpose. It stands to reason that said individual might be kicked out of the game if not the sport as this is meant to be a fun pastime for everyone involved.