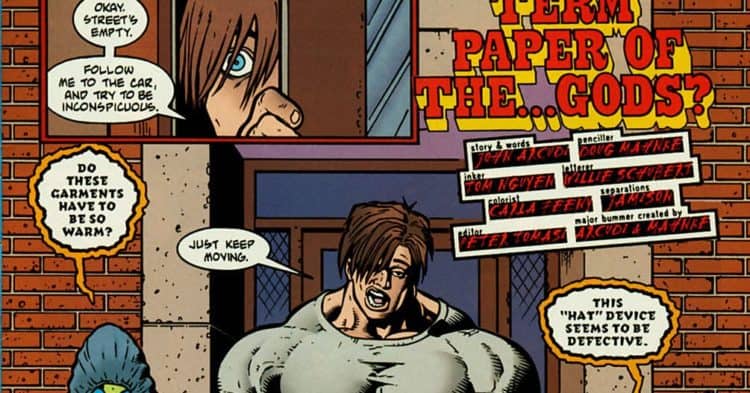 To be fair there are a lot of DC characters that aren’t too fond of their own superpowers, which might sound kind of awkward since a lot of people might wonder how superpowers could possibly be a bad thing. But when considering how much control a person might have to possess in order to keep from hurting or possibly killing anyone on accident the powers that people possess in the comics might not be so great. Major Bummer in the DC universe is one of those that might appear to have a great deal since he was given his power by aliens and is insanely strong, invincible, and also a genius (pretty much a standard hero package in DC). But the trick is that he only ever wanted to be a normal person that could hang out with his buddies and have a good time. Instead, his powers make him a target for a lot of superheroes that want to talk to him about various things. One might think that the life of a hero would be great and that they would be carefree more often than not, but of course, that’s not the case since either a hero has a seriously dark back story or they never have a free moment since people are always in need and they take it upon themselves to help.

But when one really sits down and looks at it, how often do people really need them? For threats that can’t be handled by normal law enforcement and the military, it’s obvious that in comics that the heroes are needed. After all, when was the last time that someone saw a comic featuring a beat cop taking down a super-villain? But apart from that, heroes are for the most part those that are set apart from society because they can do things that others can’t. Sometimes it’s a trait they have a birth, other times it’s something they’re given or happen to develop at some point in their life, but the trick is that they have to learn to control what they can do, and as anyone that’s tried to practice control over anything they do in life can attest, that’s not always an easy proposition. More than one hero in the DC universe has found themselves wishing that they either didn’t have their powers or were able to control their powers in a manner that would allow them to be a more useful part of society. After all, if your powers are that destructive it’s likely that a lot of people will find it hard to trust you simply because there’s no telling what happens when emotion takes hold and a person can’t fully control themselves.

This is why heroes are and aren’t the epitome of strength though, since to be fair, they have to be strong of will to maintain their place in society and not use their powers to lord over everyone and become a demigod in their own right, but they also can’t always live normal lives since their powers are sometimes a bit difficult to keep under wraps. Being invincible sounds great since it means that a person can walk through a hail of gunfire and not suffer a single scratch, but it also means that the person doesn’t need to be overly brave either, as they don’t need to worry about being harmed and therefore don’t require a lot of guts to be a hero. There are a number of debates on what it means to be a hero and entire philosophies that have gone into this kind of discussion, and while a lot of them can be brushed aside fairly easily since they don’t deal with stark reality, some have been taken rather seriously since the idea behind being a superhero is something that many people have thought up detailed theories on when trying to reason just why it’s allowable for certain heroes to behave the way they do, and of course for some of them to think that their powers and their very persona are a burden. Again, a lot of people that have never experienced the kind of authority or power that heroes and villains tend to have would find it hard to understand how such power might be hard to deal with, but being powerless and being powerful are two sides of the same blade, coin, or whatever analogy a person wishes to use. When a person doesn’t have it, they crave it, when a person has it, they find that it’s often too much responsibility and they end up wishing they didn’t have it any longer.

DC is filled with plenty of characters that don’t want the powers they’ve been given or were born with, and for plenty of reasons. It’s hard for anyone to understand unless they can imagine what it’s like to have powers that don’t shut off on command.