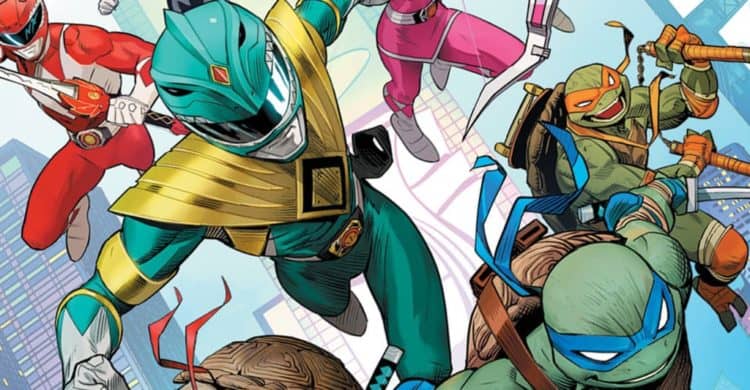 Well, the story that Andrew Dyce of ScreenRant gives concerning the teaming of the Teenage Mutant Ninja Turtles and the Power Rangers is fairly simple, but still has a few questions to answer to really get into the meat of the thing. In essence, Tommy, the Green Ranger, has teamed up with Shredder and the Foot Clan in New York, and the other Rangers are coming to confront him. In the process they end up meeting the Turtles and while there’s no telling right now if it’s a peaceful meeting or not there does seem to be enough common sense to realize that if they do start off as enemies they will eventually realize that they’re fighting against the same enemy. Of course the question of who would top who is one that might get a lot of people buzzing since there’s an idea that Power Rangers might mop up on the Turtles considering that the Turtles don’t have the same power set or the ability to call down massive robots that can combine into a titanic robot that can lay waste to entire cities.

A number of people would lean heavily on the Rangers carrying the fight since they do have the power base that’s much greater than the Turtles at their base, which means that even as allies you can imagine that the Turtles would be a much weaker backup force that could take on any lesser enemies. That seems very dismissive of the Turtles but it’s also a single opinion since there are others. Plus, there’s the idea that in New York the Turtles would have a serious advantage since they happen to know the city up and down since not only is it their home, but they’ve learned how to move about in complete secrecy without being noticed. Where the Rangers have power and a few other elements on their side, the Turtles have the knowledge of the terrain, stealth, and their baseline skills are far greater than some of the Rangers since when morphed it’s been seen that the Rangers are insanely powerful as compared to when they’re in their regular human forms.

Of course this fight isn’t going to be a fair one as you can assume and it won’t be against a Green Ranger that’s willing to drop his defenses to give his opponents an advantage. Also, the Shredder is known for underhanded tactics to gain the best advantage he can since he’s taken on the Turtles more than once. But it also seems fair to wonder how the Shredder would fare against the Rangers since he’s essentially another ninja with spiked armor but no real advantages unless he becomes the Super Shredder, who’s insanely tough, strong, and retains the skills of his original form. It seems that he might be able to give the Rangers a good run all on his own, but of course there’s the Foot Clan, who aren’t bound to be a big impediment to the Rangers or the Turtles since both teams might be able to run through them without any trouble. Of course that’s usually a lead-in to another big bad or at least a henchman of the Shredder that is inordinately tough. In other words, anyone thinking that the Shredder becomes an easy fight at some point hasn’t really followed the history of the Turtles and the many problems they’ve had with the leader of the Foot Clan.

Shamus Kelley of Den of Geek! reminds us that the Turtles and Rangers did team up back in 1998 for a TV crossover that at least a few people might remember but obviously some folks have forgotten about. At that point the event was kind of overridden by the fact that it came at a time when both franchises were still popular but had also seen their biggest fans start to grow up and experience other interests, meaning that while some remember it there are a lot of that might not have been paying attention. Thankfully though this current team-up might jog a lot of memories since it’s bound to show the power and skill of both teams and bring them together in a way that might showcase conflict and will perhaps lead people to realize that while the Turtles aren’t as overpowered as the Rangers, they’re still skilled warriors that know how to use their environment and as a result they should be seen to take a much more active role in this meeting. Whether the Turtles and the Rangers will fight one another is hard to say but it would be a good fight nonetheless, and if Tommy is allied with the Shredder then you can imagine that the fight to come is going to be something epic in the shared universe of the two since their enemies are anything but weak or easy to conquer.