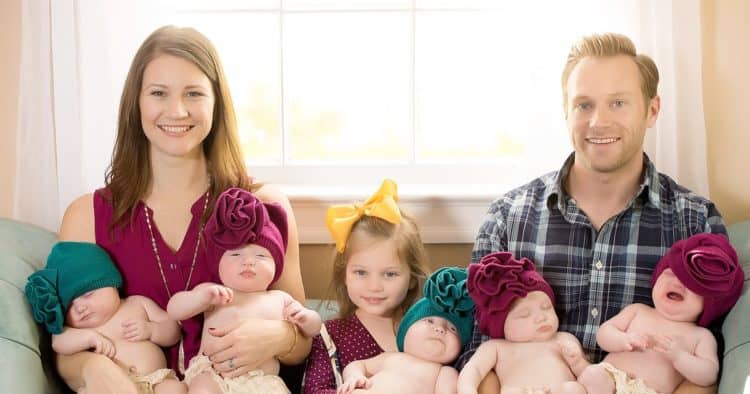 We all know how busy the Busby house is with Adam and Danielle raising their six children. At first, when we heard of a mother having to make 60 bottles of milk and change 40 diapers every day, we thought she must be superwoman. With “Outdaughtered,” we have realized it is possible, but since the reality show would not have come to be without the quintuplets, how about we pay tribute to them by learning more about them as detailed out on Wikipedia.

1. They made history in the United States

When the Busbys gave birth to all-girl quintuplets, they made history in the United States by becoming the first couple ever to achieve such a feat. The chances of giving birth to five babies are 41 to one, so although they had been warned of multiple births, five children were not on their minds. Now that Adam Busby had a vasectomy, chances of them breaking their record have gone.

The gestation period for a human being is 40 weeks, but sometimes complications make it impossible for the mother to reach full term. In such instances to avoid putting both the life of the child and the mother at risk, the baby has to be prematurely born as was the case with the quints. The Busby quints were born through cesarean section at only 28 weeks when some of their organs had not developed.

3. They comprise a set of identical twins and fraternal triplets

Imagine giving birth to five children that look alike so much that you cannot tell them apart. Although that did not happen with the Busbys, they still were blessed with identical twins whose names are Olivia Marie and Ava Lane. The other three are fraternal triplets named Hazel Grace, Riley Paige and Parker Kate. Fortunately, you can still tell all of them apart because as they have grown older, they have developed different personalities and traits. For instance, Hazel is the only one with red hair, and she wears glasses. Olivia, on the other hand, has the curliest hair while Riley has the biggest bright blue eyes. Parker has the straightest hair and is the tallest while Ava has a square face with long hair that is curly at the ends, as described by CountryLiving.

4. They have an older sister

Sisters can fight over toys and clothes, but when there is an older one in the picture, she can act as the referee. The quints are lucky because they already have an older sister whose name is Blayke and four years older. The funny thing is they have the same birthday month, and their birth dates are only two days part with Blayke’s birthday being on April 5 while the quints have theirs on April 8.

5. They were conceived by intrauterine insemination

Getting a child is not a guarantee but a blessing, and we view it as a privilege that we can be entrusted with these precious little beings. Matters of fertility, therefore, are not guaranteed in a couple and hence the advice that people should be tested even before getting married not only for fertility but also for hereditary diseases. The Busbys were not as lucky to conceive naturally due to the low testosterone levels and sperm count of Adam Busby while the mother also had a problem with irregular ovulation. It is during their fourth cycle of intrauterine insemination that the quints were conceived.

6. They had heart murmurs at birth

Premature babies are born with so many problems, and their chances of survival are usually small depending on how far along the pregnancy was. The quintuplets were yet to develop fully, and shortly after birth, they were diagnosed with heart murmurs. Heart murmurs are caused mainly by congenital heart defects, but the quints got theirs treated with medication.

7. They were released from the hospital at different times

As a result of being born premature, the quints had to be placed in the neonatal intensive care unit (NICU) to improve their chances of survival by allowing them to develop their organs fully as well as avoid the risk of infections. Although the specialized care unit is reserved for premature babies for the first 28 days of their lives, the quints had to remain in the NICU for the first several months of their lives. Children are different, and they all develop at differing rates, which is why Ava was the last to be released from the hospital on July 6, 2015.

8. They will be separated in pre-school

Sisters can become attached when they spend every minute of their lives together, but Danielle Busby decided to separate her quints in pre-kindergarten. Danielle explained, as reported by Romper, to encourage their different personalities to develop. However, only one will be in a class alone while the rest will be paired up; Hazel has already proven to be independent, so she would not mind being on her own. Since Riley and Olivia bicker a lot, their mother thought it best split them up and pair them with another sibling.

9. Their parents have their reality show

While another parent would have rushed to terminate the pregnancies and maybe keep only those children she could afford, Danielle decided to take advantage of the outcome. The Busbys, therefore, went on television to document how hectic yet fun taking care of six daughters can be with five of them being newborns and the other being a toddler. So far the reality show “Outdaughtered” has been on air since 2016 and the fifth season premiered last month. Since Romper reveals that reality shows typically pay families 10% of the budget, the Busbys get paid enough to cater for their children.

10. They were at risk of developing breathing problems

You can never be too careful when taking care of children; a piece of crayon may seem harmless, but to them, it could end up in the nostrils or ears. Sometimes things happen in our homes that put our children at risk without our knowledge. For instance, in the Busbys house, there was a serious mold problem that was in the upstairs and Ava’s room that led to her developing breathing complications. Upon further investigation, the Busby home was deemed too risky for raising their children unless they thoroughly cleaned the house since the girls were being exposed to 19,000 spores every night as they slept. The family moved out of the mold-infested house as Cheat Sheet reported.