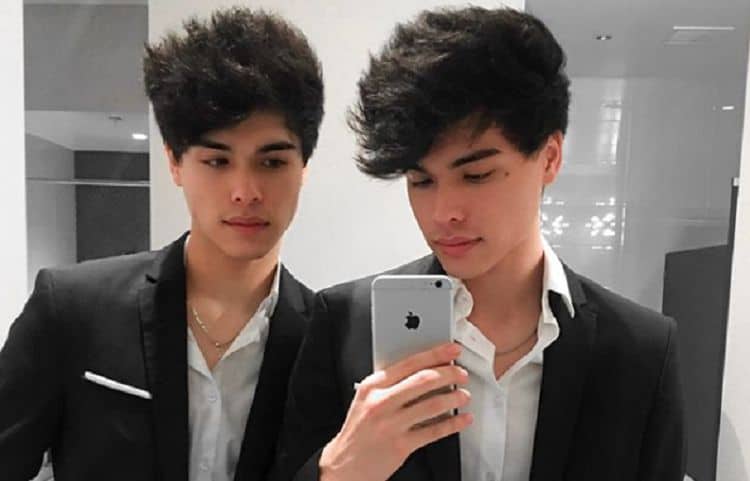 The Stokes Twins are brothers Alan and Alex who are best known for the short videos that they create on TikTok. They are half American and half Chinese and grew up in the United States. Here are ten things about them that you may not know.

1. Alan Is The Older Twin

The twins were born just two minutes apart, with Alan being the older twin. Their birthday is November 23 which means they are Sagittarius. They were born in Hollywood, Florida and this is where they grew up. Being twins makes the brothers very close and it is something that they often talk about in their videos. Alex has said that he has always feared being separated from his twin.They live together and most of the videos they create are done as a twosome rather than individually.

2. They Have 17 Million Followers Across All Channels

Vidcon estimates that they have 17 million followers across all their social media channels. One of the platforms that they are most active on is TikTok where they have over 13 million followers. They also make longer videos which they regularly post on YouTube. They keep their fans updated on the projects they are working on at the moment by posting to Facebook, Twitter and Instagram. They have individual accounts on Instagram and Twitter.

On the twins official Facebook page there are several posts which refer to Alan’s relationship with Leslie Contreras. The two seem to have been dating for a while and their posts suggest that they are both very happy. Contreras also posts a lot of videos on TikTok where she plays piano, dances and performs comedy sketches. She and Alan have made several TikTok videos together. She also works as a model and a social media influencer.

4. Alex Once Had A Burst Appendix

Inside Edition reported that Alex became seriously ill when his appendix burst. He had been feeling unwell for a few days but neither he or Alan thought it was anything to really worry about. However, when he was rushed to hospital after taking a turn for the worse, it was discovered that his appendix had burst and he needed emergency surgery. He was told that if he had waited another day before coming into the hospital that he could have developed an infection that could have killed him.

5. Alex Has A Mole On The Right Side Of His Face

The Stokes twins are virtually identical but Alex has a small mole on his face which helps fans to be able to tell them apart. This is something that he has had since birth. Without the mole, the twins are virtually identical. They even have the same hairstyle. Fans that have watched a lot of their videos may be able to identify subtle differences between the two of them that means they can tell them apart. However, for people who are not familiar with them it is much more difficult.

6. They Are Both Dog Lovers

Both of the twins love dogs. When they were growing up their family pet was an Alaskan Malamute dog that was named Sheeba who both of the twins loved very much. At the moment, the fact that they are so busy means that they are not really in a position to have a dog at home with them. They would likely take the opportunity to own another dog in the future when things are more settled.

7. The Twins Are Part Of Sunset Park

They are part of the YouTube group Sunset Park. Other members of this group include Okaymoe, Coby Persin and Ethan Bradberry. The group was formed in 2017 and they have their own YouTube channel. A new video is uploaded to the channel on a weekly basis, but not every member will appear in every video as all members also have their own projects to work on. A lot of their videos feature challenges that members of the group have to complete and this is something that the Stokes twins often do in their videos as well.

8. They Have Acted In A Number Of TV Shows

Since 2018, they have made appearances in a couple of TV shows. They played the same characters respectively in the shows Afterschooled and Brobot. Coming Soon also reported that they would be starring in the second season of Light As A Feather. They would be playing new characters that did not appear in the first season. They starred in two episodes of this show. There have been no recent announcements that they will be appearing in any other shows but this is something that could happen in the future.

9. They Have Released A Music Album

Although they do not perform themselves, they have created an album which is a compilation of some of their favorite songs. The album is available on streaming services such as Spotify and an album cover was made which featured the twins. The album has been popular with fans because it gives them an insight into the music that the twins like to listen to. They may look to do a follow up album at some point, but this is something that has not of yet been confirmed.

10. They Are Good Friends With Skateboarder Ben Azelart

They are good friends with the skateboarder Ben Azelart and the three of them have worked on several projects together. This includes the TV show Brobot that all three of them starred in together. He has also appeared in a number of their TikTok and YouTube videos. Azelart has his own YouTube channel where he uploads videos of his skateboarding stunts. He is a bit younger than the Stokes twins but they all have the same sense of humor and this is one of the reasons that they get on so well. It is likely that the three boys will work on more collaborations in the future.