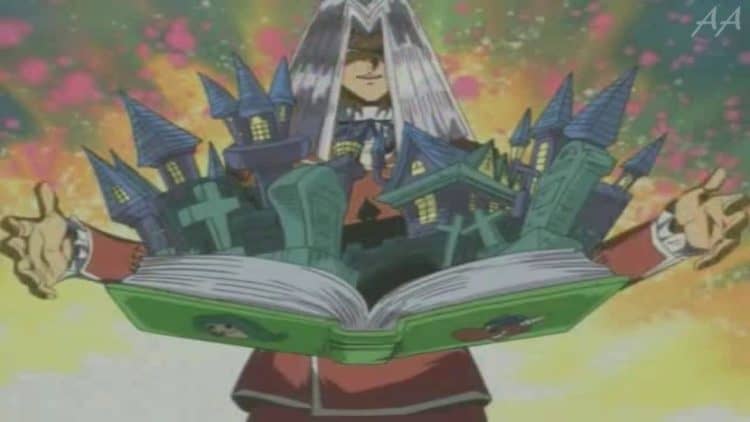 After revisiting the anime series that was all about strategy and cards known as Yu-Gi-Oh! on Netflix, some childhood memories came back to me. The monsters, the suspenseful duels, and the memorable characters were just as amazing as I remembered them. What kept the series going were the despicable, but memorable villains that were a serious thorn in Yugi’s side. Many of the villains had their own reasons for challenging Yugi, but all gave him or his friends a duel to remember. It was a non-stop game of strategy and outwitting the opponents, but in the end, Yugi and his friends proved that the heart of the cards would prevail against anything. There were many of Yugi’s rival duelists to choose from, but it’s time to count down the top five villains of the show. Let’s duel!

Kicking off the list is the man who appeared in the pilot as the very first antagonist of the series. Seto Kaiba, a rich and arrogant duelist was eager to buy a rare Blue Eyes White Dragon card from Yugi’s grandfather. When Yugi’s grandfather refused to sell it, Kaiba challenged him to a duel, only to reveal that he possessed three Blue Eyes White Dragon cards all along. Yugi’s grandfather lost the duel and was sent to the hospital due to the shock of Kaiba’s holograms that made the duel monsters look very real. When Yugi and his friends arrived to help him, Kaiba only mocked them and proceeded to rip Yugi’s grandfather’s Blue Eyes White Dragon card in half. While Kaiba became more of an anti-hero throughout the remainder of the series, his introduction showed his villainy and obsession to be the top duelist to the absolute extreme. His constant need to challenge Yugi and thicken their rivalry only cemented his place as Yugi’s primary rival, as he consistently refused to accept that Yugi was his superior in dueling.

How many other Americans in anime got the bandana and swagger to show how cool they are? The continental duel monsters champion known as Bandit Keith was a villain that wasn’t around for too long in the Yu-Gi-Oh! Series, but he certainly made his presence known. After being humiliated by Pegasus in a dueling tournament, Keith became obsessed with regaining his former glory and defeating Pegasus his tournament in Duelist Kingdom. Keith was willing to do anything to fulfill his vendetta, including stealing the star chips of his followers in order to gain entry to Pegasus’ castle, trapping Yugi and his friends in the caves, and stealing Joey’s entry card to compete in the semi-finals. When Keith and Joey faced off, he resorted to cheating in order to power up his slot machine monster, only to be defeated by Joey, suffering another humiliating defeat. Keith refused to accept defeat and directly threatened Pegasus’ life, a move that resulted in him being dropped into the ocean through a trap door. Kaiba may have been arrogant, but Keith is the ultimate sore loser who would do anything to win. For a guy who cheats and refers to himself in third person, Keith is just a villain we all love to hate.

Would anyone suspect a duelist with a deck that’s entirely based on insects be a bit of a worm? If not, then you would be very surely mistaken. Weevil secured his place as a despicable villain when he tossed all of Yugi’s Exodia cards into the ocean, immediately proving that he is nothing but a cheater. During the Battle City Tournament arc, Weevil snuck a parasitic insect card in Joey’s deck, infecting most of his cards and nearly securing his victory. However, despite his cheating methods, Yugi and Joey both defeated him, leaving Weevil humiliated and with a grudge. He would later return to challenge Yugi under the influence of the villain Dartz, pulling a cruel stunt on Yami Yugi and Tea, ripping a card that seemingly contained Yugi’s soul, only to reveal that it was a useless insect card. Weevil would subsequently get his comeuppance just like he always did, but his deceitful tricks never ceased to infuriate everyone. He is a bigger insect than any monster in his deck.

This power-hungry businessman is the main reason behind Seto Kaiba’s dark personality. When a very young Seto beat Gozaburo at a chess game, Gozaburo adopted him, along with his younger brother, Mokuba. Unfortunately, Gozaburo was anything but a kind father. He forced Seto to constantly study in hopes of making him worthy to become heir to his company. When it’s revealed that he has a biological son named Noah, Gozaburo reveals that adopting Seto was part of his plan to motivate Noah to become a more worthy heir, a plan that later backfired when Noah was in a tragic car accident. During the virtual reality arc, it’s revealed that Gozaburo became an artificial intelligence of his own will after losing the company to Seto, using Noah (who he turned into a living computer after his accident) to get revenge on Seto and take control of the world by hacking himself into every computer on Earth. Gozaburo is different from other villains in the show, given his status as a cruel father, a greedy businessman, and a possessive megalomaniac that will hurt anyone to get what he wants. With him as a father, we can honestly feel sorry for Seto.

The creator of the game of Duel Monsters, the man who stole souls and stored them in cards, the man known as Maximillion Pegasus was the first major antagonist of the series and like Yugi, an owner of one of the seven millennium items. Pegasus was the owner of the millennium eye, an item that allowed him to see his opponent’s cards during a duel. During the first season, he stole the souls of Yugi’s grandfather, Mokuba, and even Kaiba, giving Yugi one of the most challenging duels of his life. What makes Pegasus such a great villain is his facetious attitude, his unfair advantage in duels, and his unique deck that consist of monsters based on cartoon characters. His most powerful card, known as Toon World, granted him the ability to turn any of his monsters or his opponent’s monsters into toon monsters, hiding them in the Toon World card to protect them from any attacks. The one redeeming quality of Pegasus was his main motivation to target Yugi: his desire to resurrect his dead lover, Cecilia. Pegasus made toons look awesome amongst the other scary and powerful monsters and gave Yugi a duel that forced him to think harder than he ever thought possible. Pegasus stood tall in comparison to the other typical and clichÃ© main villains of that series, making him a villain that anime fans will forever remember. Tough luck, Yugi-boy.

Watching the series again was quite the ride and made me regret selling all of my Yu-Gi-Oh cards, but that didn’t stop me from enjoying the show. The show had many great villains to choose from, but these five were a mixture of cheats, thieves, and power-hungry control freaks that would do anything to achieve their goals. When they were cocky enough to think they could take on Yugi or Joey in a duel, they paid the ultimate price and met a satisfying defeat at their hands. The heart of the cards is always the best hope.