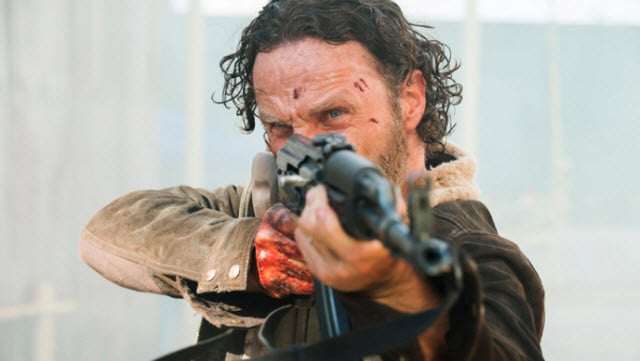 There are really no surprises to be found in “No Sanctuary” – Rick and company’s stay at Terminus ended in a bloody furor as expected, Carol returned, and no majorÂ The Walking DeadÂ character died (or for the most part, was really ever in any mortal danger, save for poor little Judith). And despite the outright predictability of the season five premiere’s broad strokes, it’s the details of “No Sanctuary” that make it the most promising season premiere since the pilot – and though it may lead to a long season ofÂ The Wandering Dead, starts the show off on the right foot when it comes to where it places its players physically and mentally.

The thing I worried about during last season’s finale was the inevitability of it all: we all knew Rick and company were going to have a horrible time at Terminus, and eventually escape: the only real questions were “how?”, “when?”, and “at what cost?”. I suppose Scott Gimple and company predicted this, and decided to blow up Terminus (literally) in the span of 35 or so minutes, a satisfying (if odd) way to culminate a story it took half a season to reach. Obviously, season 4.5 wasn’t a waste of time because those episodes delivered the best character work of the series, but in terms of overall narrative, feels a bit unbalanced. There’s really no time wasted in “No Sanctuary”, which jumps back and forth in time (with awkwardly placed “NOW” and “THEN” title cards when comparing the Terminus group with Rick’s group) to show Rick and company escaping with the help of Carol, who conveniently pops back into the narrative to save the day, pulling out all the tricks in the playbook to release the very man who sent her packing a few months earlier.

Beyond the whirlwind of plot that is “No Sanctuary”, the episode really succeeds because of how well it retains the character-centric approach it shifted to in the back half of last season. Zombie kills and explosions are good fun, of course, but the real meat and potatoes of this show (when it wanted to have them) was grounded in the characters of the show, and their attempts to hold onto their crumbling sense of humanity, stuck between a moral rock and an immoral hard place, where the only option for survival is the latter.Â The Walking DeadÂ hasn’t always done the greatest job making that debate a difficult one (does anyone think twice about Rick mowing down the Terminus people, even after it’s revealed the same thing happened to them?), but the foundation formed last season is still there in “No Sanctuary”, especially in scenes like Tyreese’s Quality Cabin Time with Martin (hey, another David Simon alum! This show LOVES actors fromÂ The WireÂ &Â Treme – includingÂ Seth Gilliam, who will make his first appearance as pastor Gabriel Stokes next week).

Tyreese’s struggles to be the violent man the world demands him to be is really the emotional foundation of the episode, even though it’s given much less screen time than Carol’s plan and Rick’s rampage across a chaotic Terminus. In a post-apocalyptic world likeÂ The Walking Dead‘s (one where enough time has passed for civilization to reform into small colonies), it’s nearly impossible to discern the line between “good” and “evil” (something Glen alludes to when he points out to Rick why they’re survivors themselves), and watching Tyreese struggle with that, while being challenged by someone as numb and apathetic to the human condition as Martin, is a surprisingly good emotional framework for the other characters of the episode, particularly those in the Terminus community, who act like people who’ve fully lost their faith in any sense of morality, humanity lost when their own group was trapped, raped, tortured, and most likely eaten (where else do they get the idea from?), best shown when Mary and Carol cross paths in the memorial room for those lost in the first battle for Terminus (the second will most likely be the last, being left in a burning, undead cloud of black smoke in the distance).

Really the only problem with “No Sanctuary” is how the show undercuts its own drama: we know Martin isn’t going to snap Judith’s neck, just like we know Rick, Glen, Bob, and Daryl aren’t going to have their throats slit when it’s revealed there are four other guys we’ve never met sitting in front of the blood trough with them.Â The Walking Dead‘s always done a solid job when it actually commits to placing key players in peril, but the Terminus slaughterhouse is not the dark, barred in areas of the prison; there’s no sense of dread occurring for any of these characters, no heightened sense of drama when one of the butchers repeatedly prepares himself to bash the back of Glen’s skull in (something that kind of feels like a nod to the comic book series, for those familiar with the inked series’ recent history) – it’s pretty obvious everyone is going to survive this affair, which does undersell some of the loud, explosive, and bullet-ridden set pieces of the episode, which are still admittedly entertaining, thanks to Carol’s badassery and the sheer conviction Rick acts with (something we haven’t seen a lot of through the show’s run, most of it spent with him sweating as he struggles to make a choice).

Although “No Sanctuary” feels more like the real season four finale than a true season premiere, the relentless forward movement of “No Sanctuary” – and the directions it leaves itself open to for the season, be it any survivors of Terminus, Beth’s kidnappers and/or the people who first attacked Terminus, the post-credits appearance by Morgan, or the quest to DC – makes for one of the most kinetic episodes ofÂ The Walking Dead,Â one enhanced by the slight existential leanings of Tyreese’s day in the cabin. With Carol back in the fold and Rick’s group on the road, “No Sanctuary” is the most promising premiere of cable’s most popular drama, a surprisingly strong premiere that may not aspire to be deeply intelligent, but doesn’t quite feel mired in the melodramatic stupidity of seasons past. Only time will tell, but boy, does “No Sanctuary” kick things off in a fun way.

– I loved the stupid tattoo-faced man who Rick and Glen let out of the shipping container. “We’re all the same! We’re all the – “Â aaanddÂ dead.

– some of the time jumping in the first half between Rick and Carol is choppy, but it leads to their reconciliation at the end of the episode, one of the most emotionally rewarding moments of the entire series.

– Eugene’s a man with a plan… or at least, a very complicated theory about diseases attacking diseases. Very interested to see how the show adapts this particular story from its printed form – there’s a lot of potential in the different directions the show could take this.

– Really don’t like the “Then” and “Now” cards… Given that we see Gareth, Mary, and company in those containers, I think the scenes work a lot better without them. If the opening flashbackÂ didn’t clearly reveal anyone’s face, it would make the closing oneÂ more powerful and revealing, giving context to the horrors the Terminus people were exposed to, revealing them to be the survivors in the beginning of the ep and not Rick’s group, as most of the audience would assume without the “then” cards.

– Morgan’s back! Anybody surprised? … I didn’t think so.

– Glenn, to Rick while he considers whether saving people from other containers: “That’s still who we are. It’s gotta be.”