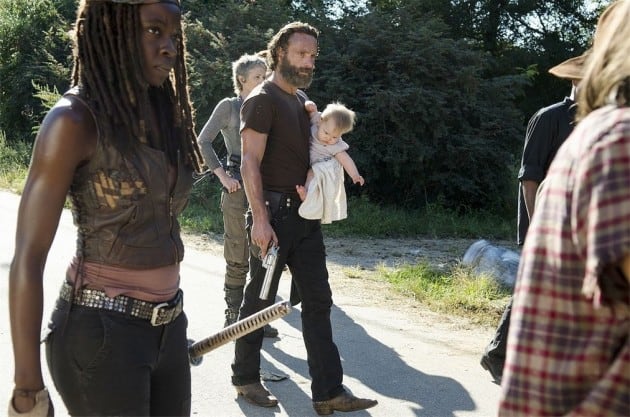 “Remember” is the first episode in the latest incarnation ofÂ The Walking Domesticated; that is, when Rick’s survivors reach a new destination, and take stock of their humanity as they struggle to re-assimilate into some semblance of civilization. This is certainly not a new story; the farm, Woodbury, the prison, and Terminus have all filled this role – yet there’s never beenÂ quite thisÂ opportunity for The Walking DeadÂ to turn this familiar story into something fresh, if it could piggyback on the momentum gathered on the road the last season and a half and continue to let situations and characters develop beyond their most basic traits.

With “Remember,” the jury is clearly still out on whetherÂ The Walking DeadÂ is going to capitalize on this dramatic shift towards more humanized stories – or at least, plots where characters struggle to remember what it felt like to be a human being, rather than an instinctual survivor. If anything, “Remember” pounds that point home with fervor, with scene after scene dissecting some friction between the honed instincts of Rick (and the group, to a lesser degree) and Alexandria, which defies every definition of post-apocalypse life Rick and company have come to know, and in many ways count on. Alexandria is a complete wild card, a blank space where human interpretation becomes a completely different tool than it was on the road; words and suggestions are a lot more powerful when people don’t have guns to point at each other, and that shift in tension is laid on thick in this first hour, the paranoia of the group seeping through every moment.

The only issue is that “Remember” doesn’t really go anywhere with that paranoia; outside of it studying Rick’s struggle to become human, “Remember” struggles to find anything to keep a consistent pace for the episode. This is the challenge for the show now; where long, elaborate zombie sequences once were, The Walking DeadÂ has to fill that with human elements of drama, something it has struggled greatly with in the past. When “Remember” is squarely focused on Rick, it’s interesting, but shallow – and for the rest of the characters, nearly non-existent. And what interesting bits (Daryl refusing to shower or settle in, Carol lying her face off to the former congresswoman) are presented, are left to operate on the fringes of Rick’s clean-shaven face, something “Remember” (and AMC as a whole, thanks to their goofy hash tags) is a little too enamored with for its own good.

Regardless, it desperately lacks momentum; their initial paranoia is a case of diminished returns. When Rick and the group refused to trust an old man and his daughters, it was an interesting sociological study (it wasn’t good, but it was interesting in theory); in Woodbury, it was easy to buy into not trusting a guy with a room full of zombie heads, wearing an eye patch; in Terminus, it made for a fun RamboÂ ambush with Carol as the star. Alexandria doesn’t add anything to this list, retreading familiar ground with some new faces on the other side, characters who lack definition in the show’s attempts at ambiguity – which is necessary to a degree early on, but is laid on a little too thick to depict any kind of duality; instead, it just feels like a situation where the other shoe is inevitably going to drop, as it always does.

We’ll see where things go; “Remember” is not exactly a promising sign, but it’s not a condemning one, either (continuing to developÂ Rick as a quasi-antagonist to everyone is a good start).Â It’s simply an hour, like many this season, that reflect how muchÂ The Walking DeadÂ has grown over the years, but still remained exactly the same show. That dichotomy is what makes it such a fascinating watch week to week, at its best and worst – and although “Remember” is somewhere in the middle, it still brings an intriguing shift of tone to what appears to be the beginning of a new era for the show.