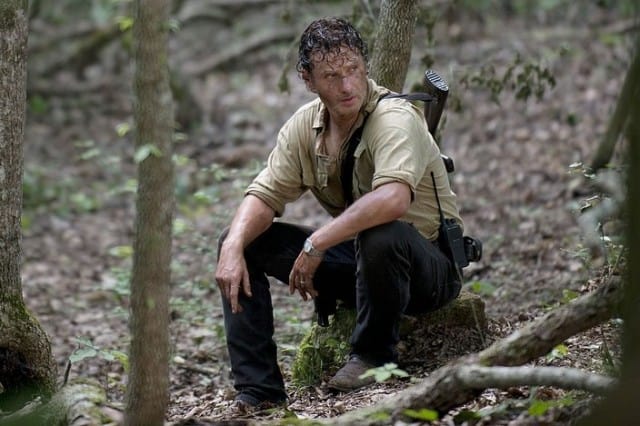 The three-episode arc openingÂ The Walking Dead‘s sixth season stand next to any other hours the show’s every produced: bringing back the split storytelling structure of season four’s back half has again paid dividends for TWD, delivering tense, powerful episodes embodying the show’s philosophies about human nature with violent fervor. Through the blood, the Wolves, and the massive zombie horde,Â The Walking DeadÂ has found unexpected nuance in the rather one-sided debate about Rick’s group vs. the Alexandrians, neatly representing the delineation between those who’ve survived by hiding behind the walls of Alexandria, and those who’ve spent the last two years of their lives living in it.

All of “Thank You” really is framed by this: opening with the horn going off at Alexandria, “Thank You” splits up Rick’s zombie horde group to tell a few different stories centered around the same ideas. While discussing their new plan to keep the herd from Alexandria, Rick tells Glenn and Daryl that they shouldn’t feel too tied down by the whole ‘save the lame Alexandrians’ thing: naturally, Rick’s unwilling to trade the lives of the inexperienced crew in his employ for those of his friends, and makes it quite clear what their priorities are, and should be. And for good reason: the members of Alexandria only seem to get themselves killed – especially those who are given lines outside the town walls, as we see with every non-Terminus/prison survivor that appears with Rick’s group in this episode (save for Scott, but we’ll get back to his particular sub-group).

This plays out predictably – any character getting their first line of dialogue in the episode dies, naturally – but in atypical fashion: rather than proceed as Rick intends, Glenn and Michonne go out of their way to prove Rick’s approach wrong, insisting on saving the others with them, even when they immediately prove to be unequipped to handle any sort of zombie stress: once Sturgess shoots Scott in the leg and runs away, it’s all downhill from there. Tobin gets bit, Nicholas begins to panic, and Glenn and Michonne find themselves in the very position Rick wanted to avoid: placing their lives on the line to keep the struggling Alexandria residents going, even after the injured Scott and Annie declare theyÂ wantÂ to be left behind, making the self-sacrifice Nicholas had proved time and time again he wasn’t able to make himself.

Before we get to Nicholas’ involvement in the affairs, let’s talk about the other 95% of “Thank You”, which was as effective in building tension as anything in the series. What really strikes home is how easy it is for Murphy’s Law to take over: just look at Rick, who ends up in a dead RV, with a gashed hand, and five dead bodies of Wolves laid outside, who died in gunfire that’s now attracting a large portion of the zombie herd. Covered in blood, he can’t get Glenn on the radio (a nice callback to the pilot and the first conversation Rick and Glenn had), and can’t see Abraham/Sasha or Daryl anywhere: the place Rick begins and ends the episode in two very different places emotionally, and that arc helps seal the episode’s ideas about communityÂ and isolation, and how they’re both simultaneously the best and worst allegiances a person can make. Isolationism only leads to loss of compassion and humanity – but choosing community can often be the reason one gets killed, in the nameÂ of helping others (most characters arcs on this show are wrapped up with self-sacrificial deaths, a pattern that grows more predictable with each season, but nonetheless effective).

Rick’s theory has always been humanity is like comfort food: it’s all nice and good to be part of a tight-knit community of people willing to do whatever for each other, but that group can only hold so many people. And Rick’s sense of loyalty is so strong at this point, it’s no wonder every episode turns into a debate of Rick’s group vs. Alexandria: Rick’s trying to keep that isolated feel inside the walls of a community, and in the process, has threatened the very fabric of their weak, unprepared society: he’s challenging them to be more, yes, but he’s working under the assumption that they will all fail to rise to the task, and he will have to take over. And that lack of trust is what puts him in the position he ends up in at the end of “Thank You”, desperately trying to get Glenn on the radio, at a crisis of faith made more powerful and immediate by watching his well-laid plan to move the zombie horde falls apart.

The real question in “that scene” is whether Glenn dies: which means there are essentially two reactions I could have to the episode, either how the show handled his death, or how it leaves the door open for his possible survival in the future. Given what we’ve seen and heard about the future of the show (there’s a pretty revealing cast photo I won’t link to here, where Steven Yeun appears with an actor who hasn’t debuted yet), it’s a pretty strong assumption this story is headed down the second path, the one that features the theory of whether Nicholas was getting ripped apart in those final shots, or Glenn himself.

I have a lot of thoughts on this, so let’s just start at the beginning of the scene. Since the end of last season, I’ve waited for Glenn’s dirty looks and Nicholas’ comments to come to fruition, Glenn’s misguided mentor-ship of Nicholas coming at a seemingly obvious cost to Glenn’s chance of survival in recent episodes. Letting Nicholas lead them to a dead end tops this list, and reveals to Glenn a fact he’s been trying to ignore for years: some people can’t be saved, and may not be worth saving in the first place. As they walk through the abandoned town they’re trying to hide from the horde in, Nicholas comes face to face with the supply run team him and his boys left behind (a story referenced by multiple Alexandria characters), and then leads Glenn down a series of terrible decisions that leave them surrounded by zombies from every side, standing on top of a large trash can.

Nicholas is everything Rick’s warned them about, and yet, Glenn can’t let go of his compassion for others, even when Nicholas puts the gun to his head and begins pulling the trigger. Of course, that doesn’t work, and Nicholas’ dead weight takes Glen down with him – cue the most ambiguously shot death sequence onÂ The Walking Dead, and you’ve got a moving character moment with tons of symbolic meaning that can either elevate the season, or threaten to ruin the show entirely.

Let me put it simply: if Glenn is not dead,Â The Walking DeadÂ just pulled the biggest emotional cop out I’ve seen on a show in ages, and completely undercuts its ability to build tension around its central players. While it may be anti-climatic, Glenn’s death offersÂ TWDÂ the kind of dark thematic poignancy it’s often desperately searching for: his death is meaningless, yet holds such a symbolic importance to Rick and the rest of his crew, a definitive example of why this attempt to guide the Alexandrians into self-sufficient living just doesn’t work. However, if he is dead, it’s yet another example of whyÂ The Walking DeadÂ makes it so hard to invest in characters: as soon as their character arcs move away from the broad arcs of becoming a hero and falling in love, it’s often a sign they’re about to end in some noble way (like the Alexandria sign Rick drives past, Glenn’s insistence he “needs” to get home is one of those not-so-subtle moments that remind us we’re still watchingÂ TWD). I guess we’ll have to see if that’s the case in “Thank You”: as much as I like Steven Yeun in the role, The Walking DeadÂ could be facing some serious backlash if he’s alive, even more than it’s probably facing now for ‘killing’ him in such an unceremonious way.

Though that one scene could forever taint “Thank You” in retrospect, the episode as a whole continues a strong run for The Walking DeadÂ this season, the strongest any season’s opened since the first few episodes of season 4.5 (aka the Road to Terminus arc). With such immediate sources of devastating tension, and a newfound reverence for death and conflict,Â The Walking Dead‘s enjoying a creative resurgence: hopefully, it won’t all fall apart when the true nature of Glenn’s fate is revealed.