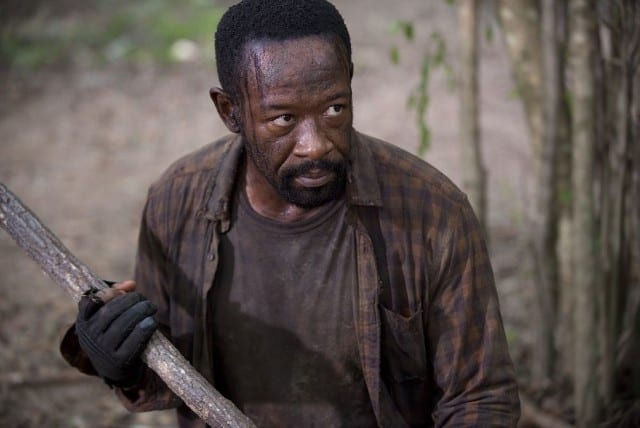 OnÂ The Walking Dead, simpler is almost always better; starring only a goat, a balding forensic psychiatrist, and a log cabin, “Here’s Not Here” pauses everything happening in and around Alexandria for an hour-long episode detailing Morgan’s journey back to humanity. Tracing his path from “Clear” to his appearance at the end of last season’s “No Sanctuary,”Â “Here’s Not Here” is a standout episode ofÂ The Walking Dead, following in the show’s legacy of building terrific, standalone hours built around a singular idea or story.

Unfortunately, it’s presence couldn’t be more awkward: in order to drum up the anxiety over Glenn’s cliffhanger, along with the resolution of everything else happening in the season’s first three episodes, the frustrating convenience of this episode’s placement takes away a bit from the episode’s ultimate impact. A necessary story to tell, yes – but wouldn’t this have worked just as well, if not better, as the season premiere? Morgan’s philosophic shift is designed to inform his character’s decisions in the present – which in the context of previous episodes, has felt idiotic and short sighted. “Here’s Not Here” works so hard to reintroduce the concept of hope into Morgan’s mind, it’s a shame that story was preceded by watching that philosophy ultimately fail, because “Here’s Not Here” is arguably the most hopeful episode inÂ The Walking Dead‘s history.

It’s a shame, because what “Here’s Not Here” accomplishes is impressive: first, the episode has to retrace its stepsÂ back to season three, nearly three dozen episodes ago, and begin engineering Morgan’s arc from there. That means returning to the man at his most broken: after Rick sees him in “Clear”, Morgan begins traveling, killing everything living and dead that he sees. There’s no chances taken: two men following him are murdered brutally, and Morgan continues to travel alone, in silence. Those opening ten minutes alone are quite a feat: it effectively places us back into a certain survivalist mindset, one we haven’t seen Rick or the others in since the fragmented back half of season four, long before we saw Morgan pass along the fateful railroad path leading to Terminus. And from there, we get the very best Morgan 2.0 Origin Story we could possibly get: a quiet hour spent with an aikido-trained forensic psychiatrist and a goat.

As is often the case, isolation proves to be The Walking Dead‘s greatest asset, allowing the show’s narrow points of view to be expressed in greater color, which naturally gives contrast to the show’s discussions of humanity. What I didn’t expect was how “Here’s Not Here” was able to do this by subverting expectations; The Walking Dead is always a very obvious show, yet there are moments of “Here’s Not Here” that are genuinely surprising, chief among them the character of Eastman, who proves to be one ofÂ The Walking Dead‘s most well-realized characters, depicting both the man and monster Morgan struggles with inside himself, and giving voice to the current tension the show’s beginning to form around Morgan and Rick’s dissonant approach to the world.

Again, where this episode is placed sells it short: as much as I enjoyed the mystery of Morgan’s new bo staff skills, seeing Eastman with said staff (after cutting off Morgan’s spear end, of course) is a pretty telling image for where this episode is going to end up. Because of what we’ve already seen, there are certain aspects of “Here’s Not Here” that are dead on arrival: we know Morgan’s not going to kill that random couple in the woods, just as we know at the very end his plan to redeem the Wolf he captured is an absolute lost cause. Having loaded the deck against Morgan’s new found morality in the first three episodes makes the character developments here a little less impactful: in the end, we know Morgan’s transformation into a “better man” is only putting him at a disadvantage with the rest of the world, the one Rick and company are currently fighting for their lives in.

Ultimately, I think the episode’s presence as a delaying tactic between the larger plot-driven priorities of this season are what sells “Here’s Not Here” – which, out of context, is among the top five episodes in the series, hands down – a little short emotionally. Morgan’s rabbit foot isn’t going to do him much against a group of people carving W’s into their head and murdering children happily: even Eastman watched a man starve for 47 days, never seeing the humanity he saw in Morgan to keep him alive. Some people just want to watch the world burn, as the Joker’s epitaph suggests: and even as we watch Morgan walk away from the flames and into the soft light of Eastman’s cabin,Â The Walking DeadÂ refuses to let us forget that relentless truth.