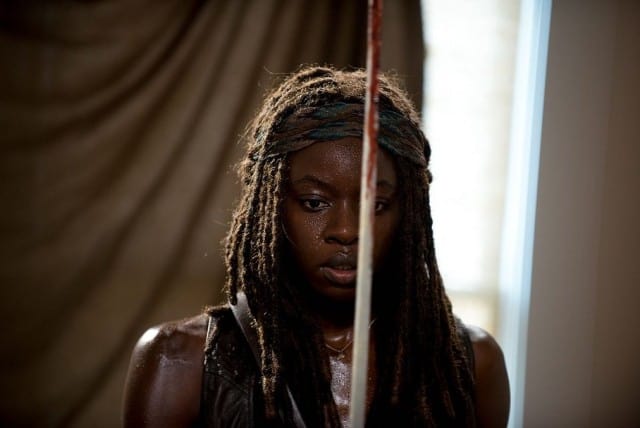 After a promising start, the sixth season ofÂ The Walking Dead has unraveled in very similar fashion to seasons past. The last month of episodes have done nothing but turn great characters into laughingstocks, undermining its carefully constructed sense of tension with a horrible series of “cliffhangers” and a lot of time wasted on pointless characters. The culmination of seven hour’s worth of narrative treadmilling, “Start to Finish” is a 42-minute bore fest, wasting the haunting image closing last week’s episode with a thoroughly lifeless, often ludicrous mid-season finale.

One would think the church coming down in Alexandria set off a panic around the town: we never see that, however, since this entire episode focuses on the main cast members and their attempts to waste time inside different houses, trapped by the zombie horde that quickly infests the entire town. And save for Deanna getting bitten and a little light head trauma/kidnapping, that’s all that happens in this hour: the zombie horde never comes into play as anything but unnecessary dramatic effect, the “horrors” of the episode supposedly coming from the crazy talk the former prisoner Wolf was spitting, or the “unstable” behavior Sam’s been exhibiting in his room, while his mother tells him to pretend the world away (I’m sure that’s really helping him adjust to his “new” life, right?). Instead, “Start to Finish” is about various people waxing philosophic about identity, even though it really presents nobody with the challenge any preconceptions on the idea. Denise helps people and it never works out (she didn’t kill anyone this time, but she did get kidnapped), Rick’s still the savior of the town in Deanna’s eyes (which still makes absolutely no sense) – and somehow,Â The Walking Dead‘s turned Morgan from a moral lightning rod into an idiot trying to preserve an already-disproven theory about human nature (one this show’s proved time and time again).

With a handful of characters spread out among various Alexandria structures, there’s really no opportunity for “Start to Finish” to feel like a culmination of the seven episodes prior, instead offering up a number of lame cliffhangers to pick up when it returns next year. Maggie’s stuck on a roof, because she fell near some zombies (ugh)! Glenn and Enid are…. staring and climbing fences! Denise, a character we’ve spent all of 30 minutes with, is kidnapped! Each dramatic punctuation “Start to Finish” offers a story is lifeless, one more pointless and redundant than the next: none more than the death of Deanna, marking the end of a character who has never really made any sense. Here, she goes out talking to Rick about how the people of Alexandria are part of their group now, even when this season’s gone out of its way to prove the Alexandrians are mindless idiots who probably deserve to die (the two families it has focused on in the town certainly haven’t helped this portrayal, only feeding the fires of idiocy with their behavior), before stair-climbing zombies (ooo – scary!) come into Judith’s short-term bedroom and have their way with her.

From beginning to end, “Start to Finish” feels like an hour of television that wants toÂ beÂ a major event, without doing anything eventful: there’s really no sense of urgency to the hour once everyone gets inside, save for the zombies trying to break into Rick’s house when Ron tries to shoot Carl (who seems pretty ok with the whole thing, explaning to Ron that it’s ok he’s mad, because Rick killed his drunk, abusive father). Everyone is locked down and safe – even giving a gun and knife to a Wolf who talks about killing everything leads nowhere, except for the whole “kidnapping a character most people care nothing about” bit, which is hardly the avenue to exciting, evocative television.

Throw in a few “stylistic” shots (by that, I mean the ants on Sam’s cookie), and what you have is an exceptionally mediocre episode of television, one that defies logic in every possible way through the course of 41 and a half minutes (that’s right – the season finales ofÂ The Walking DeadÂ grow shorter and shorter). “Start to Finish” – a title that literally makes no sense, given how this episode doesn’t begin at ‘start’, and certainly doesn’t ‘finish’ anything – is an hour suffering from all the symptoms this sixth season’s been afflicted by: a lack ofÂ actualÂ dramatic stakes, and a strong unwillingness to reach for those dramatic shifts, in an attempt to try and drag out its story just a little bit longer. I mean, “Start to Finish” literally ends in the middle of the entire town falling apart, with our ‘heroes’ covered in zombie guts walking through a horde: to say this episode is ‘anticlimactic’ is an understatement, stranding multiple main characters off-screen so it can detail an incomplete series of silly moments, ensuring thatÂ The Walking DeadÂ will begin its 2016 in the middle of theÂ sameÂ stories the last eight hours have lurched through. After how strong this season started, there really isn’t a more disappointing fall finale I could imagine than what transpired in “Start to Finish.”