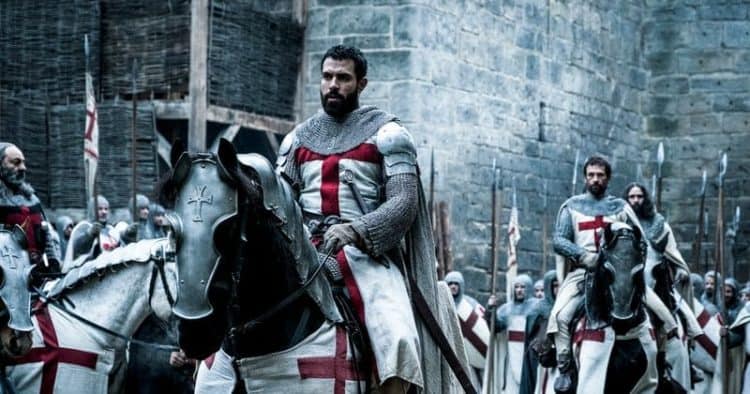 Knightfall is the History Channel’s attempt to replicate the success of Vikings using the Knights Templar. Given its name, it should come as no surprise to learn that it is set a short period of time before their spectacular fall during the rule of Philip IV of France, which happens to be the most storied part of their existence as well. Unfortunately, while Knightfall isn’t wholly without merit, there are various elements of the show that could see some improvement. Here are 10 things that we would like to see Knightfall improve on:

1. Make Up Its Mind About What It Wants to Be

One of the most common complaints about Knightfall is that it wants to head into different directions. On the one hand, it wants to be involved in gritty medieval politics, which has become more popular than ever on the TV screen in the wake of Game of Thrones. On the other hand, Knightfall wants to be a Grail quest, which is very much the realm of folklore, legend, and mythology. Theoretically, it might have been possible for a more distinctive show to blend both focuses into a seamless union, but so far, Knightfall hasn’t been successful, meaning that it might be better for it to make up its mind about what it wants to be.

2. Be a bit Less Derivative

To some extent, this problem is rooted in Knightfall’s sources of inspiration. As the AV Club notes, Knightfall draws from numerous sources of very wide-ranging nature. Some examples include but are not limited to The Tudors, The Da Vinci Code, and Assassin’s Creed, which explains much about the show’s sometimes erratic nature.

3. Get a Better Understanding of the Knights Templar

The History Channel being the History Channel, it was perhaps inevitable that the Knights Templar would be focused on the Holy Grail, which is a popular subject for the pseudo-history that is rife on the network. This is fine for a show that wants to be a Grail quest and nothing but a Grail quest. However, Knightfall is more ambitious than that, meaning that it needs to do more than just sometimes nod at how the military order’s extraordinary privileges plus incredible temporal power in spite of their ousting from the Holy Land generated much tensions between them and the local authorities.

4. Get a Better Understanding of Medieval Life

Sometimes, the ancients can seem very familiar to us. Something that should be clear to anyone who has ever been curious enough to check out the jokes of the Romans and other ancient cultures, with some excellent examples mentioned by The Guardian. Other times, the ancients can seem like aliens because of their different beliefs, their different attitudes, and their different worldviews. Showing this kind of thing can generate a sense of whiplash in viewers, but at the same time, it can be very useful for encouraging the viewers to put more thought into the material that they are soaking in.

5. Give us a Better Understanding of Medieval Politics

Speaking of which, it would be nice if Knightfall put more effort into showing just how different medieval politics could be from its modern counterpart. For example, secular kings clashed with religious authorities on a regular basis in spite of the general religiosity. Likewise, royal women having affairs were seen as hugely threatening because of the potentially destabilizing effect of illegitimate heirs on entire countries, though considering the shenanigans that royal men got up to in that regard, it is fair to say that there was a fair amount of misogyny involved as well. Showing a better understanding of medieval politics is particularly important because the period of the show actually saw a significant step in the transformation of medieval societies into something closer to the modern day because Philip IV played a very important role in the creation of a centralized French state.

6. Make Better Use of Historical Characters

On a related note, one of the irritating things about Knightfall is that it doesn’t make the best use of the fascinating historical characters that it has on hand. For instance, Philip IV was a fascinating individual who was described by one of his opponents as being neither a man nor a beast but rather a statue, which was a reference to the rigid personality that laid beneath his handsome countenance. As a result, it is a real shame that Knightfall decided to make him well-meaning but ineffectual, which is a description that doesn’t fit the Iron King at all.

7. Make Better Use of Historical Events

For that matter, it should be mentioned that Knightfall takes place in one of the most fascinating periods of French history, so much so that it was one of the sources of inspiration for A Song of Ice and Fire via The Accursed Kings. In short, Philip IV succeeded in building a strong French state, but towards the end of his life, his family became embroiled in the Tour de Nesle Affair in which two of his three daughters-in-law were caught cheating on their husbands while the third winded up being imprisoned anyways because she couldn’t be cleared of complicity in what went on. This is one of the main reasons that none of Philip IV’s three sons managed to produce a legitimate male heir that lived long enough to matter. Even worse, this was one of the main causes for the Hundred Years’ War, seeing as how the English kings had a claim through Philip IV’s daughter Isabella. Given the unfair manner in which the Knights Templar were brought down, it wouldn’t be difficult to weave an interesting revenge narrative into the whole series of events, assuming that Knightfall ever manages to get that far.

The single biggest problem with derivative plots is that everyone has already seen everything, which makes it that much more difficult to get the viewers excited about what is happening. As such, it would be nice if Knightfall made more of an effort to do something of its own instead of resorting to tired cliches such as the transition from courtly love to adulterous affair that was so popular in chivalric romance.

One of the most common methods to make pre-modern protagonists sympathetic to modern audiences is to give them opinions that are similar to those of modern audiences. This is understandable. For that matter, it is even plausible to some extent because people have always shown a wide range of opinions on the important issues even in pre-modern times. However, when implemented poorly, this can whitewash historical factions as well as make nonsense of historical realities, meaning that Knightfall should be very careful about how it uses this particular method for building viewer sympathy.

10. Have Focuses Other than Sex and Violence

Sex and violence are very popular elements in a lot of the more action-oriented historical dramas that have been hitting the TV screen in recent years, which is unsurprising because they sell well. However, whatever Knightfall wants to be a Grail quest or a medieval politics showcase, it needs to have a broader focus if it wants to be more than just a poor, knight-themed aping of Vikings.