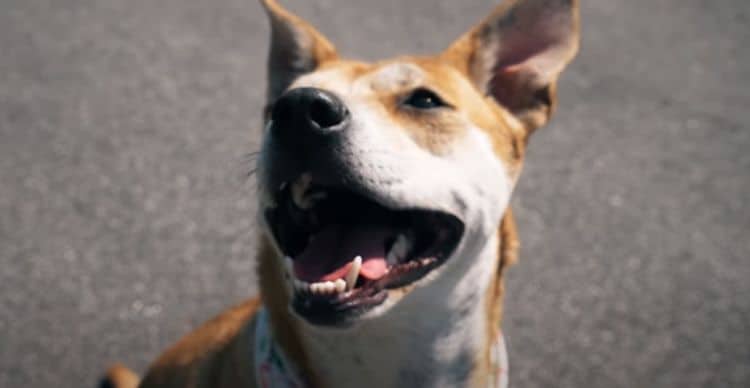 Cujo has got NOTHING on this carrot-loving pooch since while the rabies-infested St. Bernard might have terrorized a small number of people, this dog went flat out nuts on those that would DARE to touch her carrots, and even on someone that was just in the way as she was walking along. This kind of short movie is enough to make a person laugh, which was obviously the goal, and to get people to roll their eyes and wonder what in the world the filmmaker was thinking, especially since it’s pretty funny. Those must be some pretty good carrots if the bad guys are just going to keep reaching for them even after their boss continues to admonish them for taking the veggies. So many movies have been made featuring animals as either the protagonist or the antagonist that it’s enough to roll your eyes and just go with it when something like this comes along, but it’s also kind of fun to just get into the whole thing since otherwise, taking it too seriously is kind of a drag and doesn’t really help to get through it. Trying not to laugh at any point in this movie is kind of hard though since the premise is absolutely hilarious and the ending is just brutal. Overall it was a fun video since the point was pretty clear: DON’T touch the dog’s carrots.

The various roles of animals in movies have been changing for a long time now and while it’s still possible to use live animals it’s usually common that a person has to be pretty creative and it’s also common that CGI has to be used in a lot of projects since there are things that animals either can’t be trained to do, can’t be used for since the scenes are too dangerous, and then there are those that just so fantastical that CGI is about the only way that the shot could ever be completed. One thing about having animals being aggressive on film is that unless they’re highly-trained and will respond to each and every command without fault, having an animal attack could be a risky proposition since even domesticated animals rely heavily on instinct and a primal urge that might be buried deep down that tells them to attack and keep attacking until their perceived threat factor is eliminated or forced to flee. Many animals in show business are so well-trained that this isn’t much of a factor, but it’s still something that has to be taken into consideration. CGI might not always look real, but it’s still something that’s available for certain scenes in which a real animal might be hurt or might be put into a compromised position.

In a low-budget fan movie like this one though all one needs is a well-trained pooch that knows how to sit still when needed and perform when required in order to make something silly and yet still laughably fun. The idea of a dog eating carrots isn’t that far out of bounds since some animals have been known to eat some strange things in the past. Some folks have cats and dogs that eat vegetables on a regular basis, while some animals might hate their greens and stick to whatever they can get, especially if it’s junk food. But the one thing that any pet owner should know from the start is that a healthy and balanced diet for any animal is the key to keeping them healthy and happy, much as one would do for themselves since a good balance of veggies and other foods are something that can a long way towards keeping a person fit and capable when it comes to doing anything. But by all means, when a dog is in love with their favorite food and has no intention of sharing, don’t even try to take it away from them. The whole idea of this video is so over the top that it’s bound to make anyone laugh from the absurdity of it, but to be fair it was well done and executed in a manner that was able to keep a person smiling and laughing the whole way through since the production value wasn’t the greatest but it also wasn’t dependent upon that many outlandish CG effects that might have ruined it in a big way. Sometimes keeping things as simple as possible is the way to go since it maintains the entertainment value of whatever’s being created and makes it possible to keep the viewer entertained with as few eye rolls as possible.

To be certain this was a good laugh that many people might need since it’s one of the many short clips that’s been made with obvious humor and is something that could brighten your day despite the content.