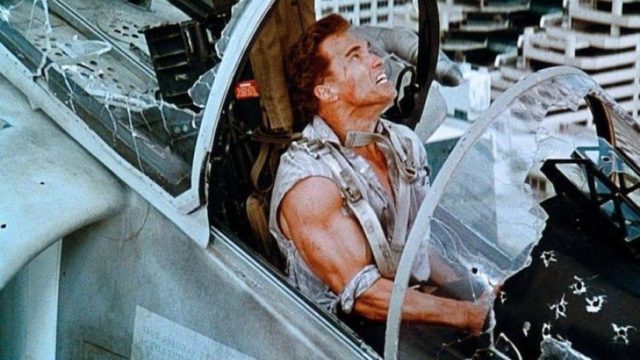 One thing you can say about the 90’s, well there’s a lot of things actually, is that there were a LOT of action movies out there. In fact there were so many action movies made in this decade that a lot of them don’t even get the two seconds of notice it used to take to walk by them in the video store. You remember the video stores right? Those squat buildings that held VHS cassettes at one point and then switched to the slimmer DVD cases before they were made virtually extinct? Yeah, those. Anyway, once the long and protracted process of getting a movie to the video store was over and done with there were entire sections that were dubbed as Action movies, and there were often so many titles that picking one usually came down to who your favorite actor was, what kind of action you liked, what kind of setting you liked to see, and so on and so forth. The big titles and big names usually got selected first and for the most part some of those were easy to deem as the best out of many action movies that people agreed were just intense and in your face.

Some of them were cheesy as hell to be honest but at the very least they were entertaining.

Remember what I just said about being cheesy? Arnold used to be one of the kings of the action movie. Well to be honest he still is since he earned his spot and that just doesn’t go away. But even though this movie went way over the top it was still fun because it hearkened back to the old days when action movies were so unbelievable and were still entertaining. Of course he can pick a set of handcuffs when they’re behind his back and he’s drugged out on truth serum. Of course he can fly a jet that’s missing its canopy, and of course he can do any other unimaginable stunt just because he’s Arnold. Being a super spy is, after all, a simple thing for a guy that’s been a barbarian, a killer robot from the future, a tough Russian cop, and a host of other things that he’s done in his career.

It took Keanu Reeves a while to hit his stride but he was at least entertaining in this film. It was Patrick Swayze that most people focused on in this movie since he was the man without any question that everyone wanted to be like. Bodhi was a spiritual person that still lived in the material world. He was tough, he was suave, and he was the kind of guy that might flip on you at the drop of a hat if he felt threatened or if you were threatening the lives of his friends. Of course if he knew his buddies were a lost cause he’d bail too. Bodhi was kind of a difficult guy to get to know fully since there was so much he had to hide. But the guy was still the personification of cool.

As I already said, Arnold has been king of the action movies for a long time running, and this one was one of the best. It doesn’t even matter if fans of the franchise want to go on about how it’s been ruined by sequels, this movie and the one before it were classics that kickstarted the whole thing. Whether it gets pounded into the ground now or it somehow gets revived in a way that sees another round of glory the two movies that made the Terminator great are still landmarks in film history.

If you’re one of the many that simply enjoys the movie for the story then you might agree that The Matrix was one of the most significant movies of the 90’s. It made people look at the world around them in a way they’d never thought about before, and it finally seemed to bring Keanu Reeves out of a funk that had been lasting for years. On top of that it led to a whole new line of storytelling that continued throughout the trilogy and became some of the most mind-bending tales that have ever been revealed. The sequels weren’t that great since the CGI effects pretty much took over, but this first film was absolutely groundbreaking.

There’s actually a fourth film on the way now, which is enough to make some fans raise a worried eyebrow but is also enough to think that they might be coming up with a way to freshen up the franchise a bit. Tucker and Chan are simply awesome together since the mix of martial arts and attitude was a perfect fit back then. The sequel was pretty good but the third movie left a little to be desired.

Hopefully those movies that are supposedly continuing or are rumored to be making a comeback will be treated with a healthy measure of respect.