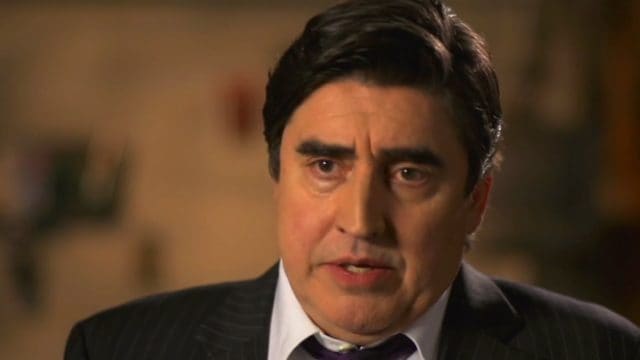 Alfred Molina is one of those actors that can fill a supporting role like none other. His versatility makes it possible for him to fit into practically any genre, but we like him the best when he’s playing a bad guy. He has a smooth and controlled style that makes the audience stand up and take notice when he enters the scene. In fact, he’s so good that he has the power to deflect a bit of the spotlight off of the leading star in the film and occupy it fully, until he exists the scene.

Here are the top five movie roles of his career.

Alfred also appeared in the 1994 Western “Maverick” along side James Garner and Mel Gibson. Molina played the part of Angel, a really tough cowboy who had a grudge against Gibson’s character. As he catches up with Maverick, the tension rises as the narration of Gibson says, “I smelled trouble…and refried beans.” Enter Alfred Molina to do his best to mess him up for his dirty dealing.

“Indiana Jones and The Raiders of the Lost Ark”

Molina also appeared in this blockbuster favorite with Harrison Ford and Sean Connery. This was actually Alfred Molina’s film debut. He played the part of Satipo, who was one of the guides that took Jones through the jungle of South America. He hits the ground running as a bad guy who betrays Jones, then steals the golden idol. Too bad, Satipo gets his when he gets trapped inside the temple and meets his demise.

This may have been one of Alfred Molina’s biggest film roles. He played the part of Diego Rivera, husband of famed surrealist Mexican painter Frida Kahlo, played by Salma Hayak. The 2002 film was an Academy Award Winner with several other nominations and wins. Alfred delivers high on his role as a part of the dysfunctional duo. It shows that he has the ability to not only play comedic parts, but he’s also amazing when it comes to taking on the characters in more serious plots. He did a five star job in this film.

Alfred joined Kristen Dunst, Tobey Maguire and James Franco in the second installment of the movie Spiderman. He played the part of Dr. Otto Octavius, also known as Doctor Octopus. He was Peter Parker’s role model, but he went totally insane after a failed experiment. He became bonded with the equipment he was handling and grew a few tentacles over the deal. Molina was able to expertly capture the sardonic and cruel sense of humor that the character needed to deliver his evil punches.