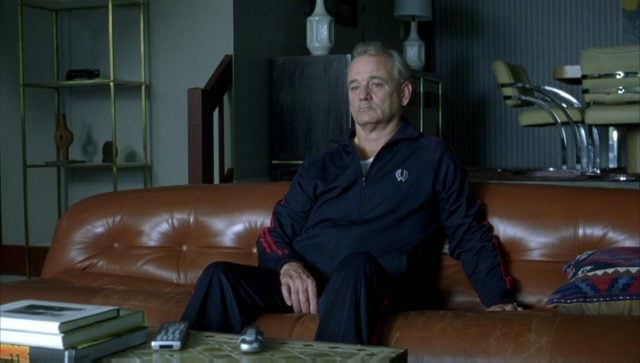 If all you’ve seen Billy Murray in are comedies then you might think it’s nearly impossible to find any serious moments of his. You’d be wrong of course. Even in his comedies that are moments of sincerity that have little if anything to do with levity, and there are still plenty of movies in which he shows that he has a lot more of a range when it comes to being dramatic and quite serious. There’s always a chance at hilarity with him but Murray has honestly kind of shifted from being the funny man to being the serious actor in the last couple of decades. He’s still showed up and showed off his funny side from time to time but as he’s gotten older the smarmy humor has kind of given way to the genuine drama.

Two weary souls that are in desperate need of human contact meet each other in a bar late at night and discover that they have more in common than they might have thought. While both of them are married nothing ever happens between them but their friendship does manage to get pretty deep, enough so that they share a single kiss near the end of the movie before parting ways.

Murray’s character is someone important in the film but at the same time his importance is downplayed by the fact that his two sons don’t respect him, he and his wife have a sham marriage, and he’s severely disillusioned with his work. He does however form a strange bond with a young high school student and becomes almost like a mentor to him, though the friendship takes a few interesting turns and hits one big roadblock.

This has elements of comedy and drama but it’s the drama that’s the most entertaining since it shows that Murray can kick it up to another level and become the man that on the outside you can’t stand, but is big teddy bear on the inside. He hides it well but he cares a lot for his new neighbors and has no issue in helping out when he can. Of course he wouldn’t admit to even this much.

Throughout everything he has to go through and everything he does in this film this is perhaps the hardest lesson. The old man would have died had Phil come along or not. The realization hits him hard when he has to watch the man die night after night regardless of what he does. Sometimes when your name is called there’s no taking it back, that’s just life.

It’s kind of hard to find any real moments of drama in this film and this is one of the only ones that doesn’t launch right into something comedic within the next few seconds. Frank has to realize just what he’s done by telling the woman he loves to go against her nature. It’s a dark future that probably won’t come to pass, but it’s still a moment that he knows that he’s responsible for.