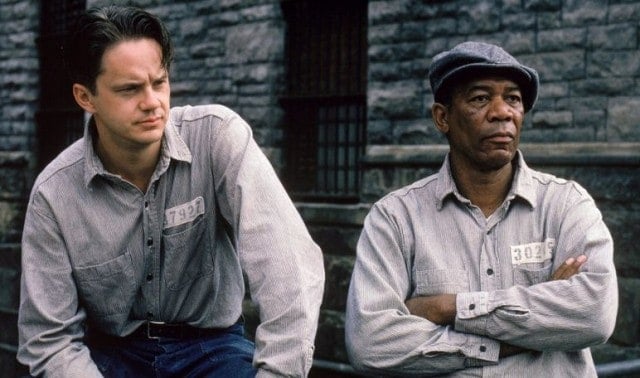 It’s been called one of the greatest movies ever made and to be quite honest it’s one of the only Stephen King stories to ever be called a genuine hit. There’s been a lot of people that could watch the Shawshank Redemption over and over just to hear the voices of the actors and to see how Andy Dufresne, who was wrongfully imprisoned for the murders of his wife and her lover, finally got justice for himself. The cast is top notch and each and every character contributes to the film somehow. The emotions that are packed into the film are just as potent as you can actually feel the frustration and irritation mounting with each passing minute.

And then of course there are the quotes, a lot of which are just unforgettable.

In prison, especially in Shawshank, it’s quickly found out that if you can’t go along you aren’t going to get along. There’s enough prisoners in the can that you should be able to find a way to go along and feel somewhat protected, but if you don’t then there’s always the groups that are ready and waiting to try you. Andy would know all about that thanks to the Sisters.

4. Put your trust in the lord. Your a** belongs to me.- Warden Samuel Norton

Is it possible to believe that no one liked the warden? He wasn’t the friendliest of guys and to be quite honest he never tried to be. Well, unless it was to Andy and that was solely for the purpose of getting Andy to do what he wanted. Otherwise he was a colossal jerk that thought he was just as powerful as could be and could do what he wanted with impunity.

3. I had to come to prison to be a crook. – Andy Dufresne

Isn’t that something? On the outside Andy is as straight-laced as they get. He doesn’t make waves, doesn’t bother anyone that doesn’t deserve it and for sure doesn’t think about harming a single soul unless he’s pushed to the breaking point. But in prison he found a way to take to crime like a fish to water. Making up a fake account and a fake persona was a thing of ease for ol’ Andy.

2. Everyone in here’s innocent. Didn’t you know that? – Andy Dufresne

Even in this day and age it’s not considered good etiquette to ask someone what they did to get themselves locked up. If a person really wants to tell you then they’ll tell you. Don’t ask, it’s none of your business. But Andy and the other guys came up with the greatest and most polite way of telling a guy to kick rocks. Of course everyone’s innocent in Shawshank, didn’t you know that?

1. The world went and got itself in a big damn hurry. – Brooks Hatlen

Imagine going in when the automobile was still a rare thing to see around town and then coming out and they’re everywhere. That sane, laid back pace of life would have been way too confusing to someone that’s spent decades in the penal system. That’s perhaps the cruelest thing to do to a prisoner that’s been in for so long, releasing them to a world they don’t recognize.

The Shawshank Redemption is one of those classics that you just don’t forget.