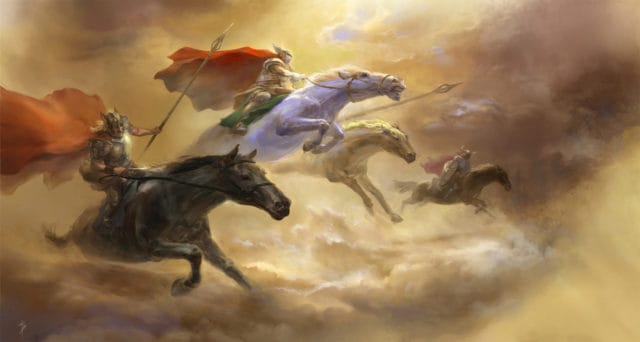 Richard Wagner’s instrumental Masterpiece, Ride of the Valkyries, is a very well known bit of music that is used far and wide and has been heard in movies and TV for decades now. The composer might not have allowed such a thing to happen had he still been alive as the piece was intended to be quite serious and adhere to the mythological aspect of the eight Valkyrie sisters of Brunnhilde as they ready themselves to transport the fallen to Valhalla. Still, for all that it has still become a very recognizable track thanks to its many different inclusions in pop culture.

That’s got to count for something.

As ridiculous and over the top as this movie gets it doesn’t hide the fact that it was supposed to be that way. The song comes in during the car chase in which Elwood and Jake are being chased by cops as well as the Illinois Nazi Party. The Nazi’s are chasing them largely because of the insult they offered by almost running them over on a bridge, while the cops want them since they made their escape early on in the movie after being pulled over for running a red light.

This is an interesting song for the captain to come into. But when you’re trying out outdo your own detectives so that you can be the first to present a bit of need to know news then it stands to reason that you should go big or don’t go at all. Holt is that larger than life personality that doesn’t show it all the time but really doesn’t need to in order to get his point across. He’s the boss, period.

A car full of intellectuals on their way to do something, anything, and playing Ride of the Valkyries is simply too much. These characters don’t seem like they’d be able to offer up enough trouble to deal with a squad of girl scouts let alone anyone else, and yet that seems to be what they’re trying to do as they psych themselves up. A confrontation by a bunch of guys with IQ’s that couldn’t lift a dumbbell is kind of funny.

It feels safe to say that Homer and his boss Mr. Burns have had their quarrels in the past, but this seems like it might have gone slightly over the line. The curmudgeonly old man has done a lot of despicable things since appearing on the show but there are some that just stand out more than others amazingly. Burns is that boss that you’d love to see something bad happen to and might not even feel guilty about.

The scene in Apocalypse now featuring this song is simply epic when it comes to cinema. It’s horrible and cruel as well but it paints a vivid picture of what was going on in those furious days when no one was really in the right and the only real trick was how to survive and return home in one piece.

Some are inspired by this piece, others are just impressed.