My wife and I recently got back into Amazon Prime.Â  For months, we didn’t fiddle with Jeff Bezos’ excuse for Netflix, for fear we might further pickle our brains on old Jim Wynorski fodder.Â  But thanks to my wife’s botched eBay order of Medium Season 1 on DVD, we found ourselves re-immersed.

The mix-up turned out to be pretty good.Â  We immediately gained access to every episode of the 2005 tv series, with just our Prime membership.Â  A month later, my wife and I finished watching every gory, yet extremely pleasant moment.Â  Strange thing is, 12 years ago when it was on tv, I remember totally hating Medium.Â  I recall even hating people who told me they liked it!Â  It was because of the crazy lady I heard it was based upon, Allison Dubois.Â  Despite my original reluctance, I have since become a diehard fan of Patricia Arquette, Jake Weber, and their band of psychic girl power.Â  If you happen by Medium on Amazon Prime, I heartily recommend giving it a shot.

Allison “ONE” is certainly aligned to the numeric ranking for various reasons, even though she periodically gets help from her three girls. Â All the kids, Ariel, Bridgette, and Marie share their fantasy mom’s gift for accessing the after-parted.Â  They each use their paranormal perks, sometimes collaboratively, sometimes alone, to solve crimes and save the day in Phoenix, AZ.

There is a natural chemistry between every member of this faux family, especially between Allison ONE and Joe husband.Â  When you watch the Dubois’, you seem immediately drawn in; rooting for them to win and hating when they do not.Â  You come to feel their every emotion–maybe Allison’s psychic stuff rubs off? Â Bottom line, if you can handle the inevitable but infrequent violence, you are privy to a group of extremely relatable characters for seven years of tv life. Â That’s Allison ONE.

Now for the other one, the “real” one… Allison TWO.

Allison TWO is exactly that.Â  Number 2, numero dos, a cat turd, take your pick. Â Sure, she is kinda pretty, with her fire-furly locks and drawing smile. Â But let’s really take a look at the red woman my new favorite tv show is based upon.Â  I shall submit to the court irrefutable evidence proving beyond reasonable doubt Allison ONE is not the only psychic just acting out her lines.

In every instance I have seen but one, Allison TWO repeatedly paints a most intriguing aspect of what the dead tell her about their existence.Â  In fact, according to the real Allison Dubois, I am compelled to believe being a cold case may be the most amazing experience possibly imaginable!

Dubois claims the dead know our past, present and the future.Â  The dead can visit any point in time and space, with the effort of a smile.Â  They cannot physically affect our world–Mr. Teefy from Season 6, episode 14 is a perfect dramatization of this.Â  But the dead can still interact, collaborate and I would bet bone adjacent deadheads if they so desired it.Â  Did I mention they never grow any older than the age they died?Â  No, the more Allison TWO talks, the more I want to procure a firearm and get the party started, baby.Â  That is until I saw her discuss suicide on YouTube. Â Remarkably, it is in this video that Mrs. Dubois actually kills herself.

If you do a search for “Allison Dubois suicide video”, you will find just such a depiction. Â Dubois, in her statements about suicide, utterly unravels every hint of constructed reason she has previously spun about the dead!! Allison Dubois, the lady who demands our loved ones are still with us, and are happy and doing great, is now barking how bad it is for people to commit suicide and that if you have thoughts about offing yourself, you should “get help immediately.”

“What was that? But why Allie?? You mean if I ice myself, I won’t like becoming a godlike being, who lives forever, never ages, and can do everything I could possibly dream of doing, save for maybe touching crap in the corporeal world?”

My guess for this little “disclaimer” is too many shared my own reactions to Dubois’ first portrait of death, and at least one took it far enough to warrant her attorneys.

This isn’t news.Â  For a few years now, you can google articles that say Dubois is a fake.Â  A peek of her website just this morning depicts a God-awful attempt at Word-pressing.Â  She could better its design with a ball bat and some aim.Â  The oddity, and one reason I am compelled to profess today, is many still believe in Allison Dubois.Â  My wife even clings upon a glimmer of faith that the woman is on the level.Â  But with a few YouTube videos and a dash of logic, I would like to say we have some honest conjecture now to conclude my beloved Trina, and anyone else who continues to trust Allison Dubois, only does so because they do not wish to stop.

The other reason you are reading about Allison Dubois in 2018 is so I can root for what I feel is a really great TV show, done by some very talented artists. Â I would not want others to pass up such a well-written series, just because the fiction you see in it is truer than the real-life horse puckey it is derived. 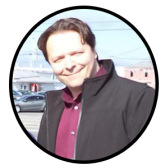 I create, therefore I am a creator. I also have a really big forehead.