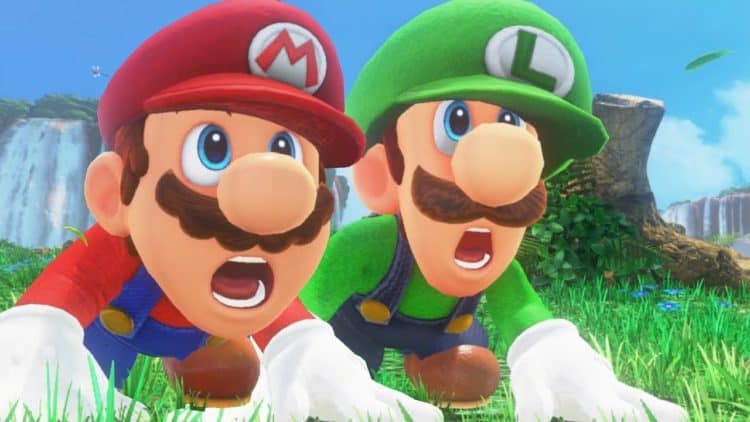 So was this all about Luigi being a monster or Mario? Or was it just meant to be a quirky clip about how both brothers are unintentional monsters for eating Toad’s son and then many other mushroom children? Huh boy, that’s a little confusing now considering that for so long the game has been all about getting the ‘magic’ mushrooms and using them to power up. Was there ever a power-up mushroom? Or have Luigi and Mario been eating mushroom children all this time? It’s enough to think at this point that some of the mushrooms that players have seen over the years have had faces on them, and that Toad is a pretty good indication that there are mushrooms in the kingdom that do grow up. Boy, that makes the game take a dark turn in a hurry. Thankfully someone’s having a good time with this and poking a lot of fun at the game, as has been done in a lot of different ways over the years since Mario and Luigi eating mushrooms in a fantasy world is about one of the easiest things to make fun of that it’s kind of an easy target. This is far from the worst thing that the brothers have ever been seen to do in the game since when you think about it, the abuse they dole out to the residents of the kingdom, despite the fact that they’re often seen as the enemies, is pretty brutal.

Just imagine being one of the many creatures that exist in this game. Now think of a couple of plumbers, one of them a heavy, mustachioed oaf in a red suit, and the other a lanky oaf in a green suit, stomping on your head in order to gain points and move ahead in order to do the same thing to your buddies and the rest of your people. Or how about the Koopa’s that get knocked out of their shells? If you’re really going to take a hard line against Mario and Luigi then you’d have to list and label every offense they’ve ever given to the many denizens of the fantasy world they traverse so often. Of course, if you’re going to take a hard line against this game then you might need to reassess your life and the reason why you’re such a grump since the idea of getting down on a video game because of the supposed violence makes about as much sense as getting down on anything that’s fictional. If a person has trouble with the violence their kids are seeing, it’s time to talk to them about it, since banning it outright is one of the worst ideas since if anyone has learned anything since the time they were kids, the act of banning something usually means the kid is going to want it that much more and will do what they can to get it.

But back to why Luigi is a monster since I kind of blew over that point. One could say that Mario is even worse since he does everything first and he’s considered the dominant brother. But Luigi follows in his brother’s footsteps, which means that he’s either a mindless follower or he approves and thinks that everything Mario does is right. Boy does that sound familiar since in the fantasy and real-world that’s usually how a cult begins. But in Super Mario Bros. it makes Luigi a bit of a monster, but not so bad that he can’t be redeemed in some way. The fact that they’re both seen as heroes more often than not in the game is the one redeeming quality that kind of keeps them from being out and out monsters. If these two are monsters then the same would be said of any hero in a video game since when you look at it, very few heroes ever do absolutely no harm since the enemies in the typical video game are out to hurt the protagonist, meaning that it’s a case of avoiding them, fight them and defeat them or give up and the game doesn’t go any further. The fact that there are people who would debate this as if it were a life and death situation is kind of sad in a way, especially given that as a fictional game and world, there are no huge ramifications since those that believe that kids emulate video games likely have yet to watch their kid, or any kid, jump on someone’s head to try and get them to fade away into oblivion.

It feels a bit silly to have to discuss a video game in realistic terms, doesn’t it? But there are plenty of people that do and will since for some reason there are those that can’t help but insist that fiction will dictate what happens in reality on a continual basis. Ironically enough, those are the people that some might need to play a game to loosen up a bit.