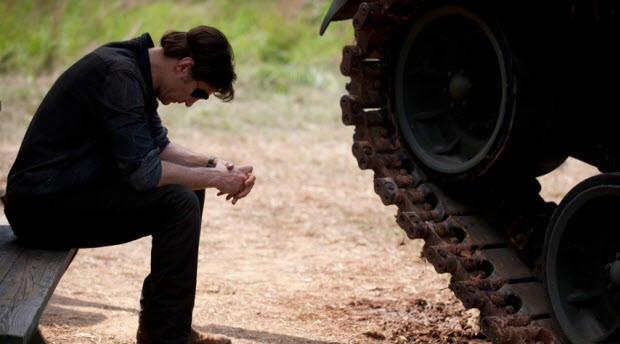 Last week, I pondered how long The Governor’s redemptive arc would last — turns out it was contained to the events of “Live Bait” and no further. “Dead Weight” goes out of its way to hit the rewind button on The Governor, removing “Bryan” from the picture before he really even existed. It doesn’t take long, either: by the time “Dead Weight” ends, The Governor is exactly where he was a season ago, preparing a community to attack the prison community he despises so much.

As with most episodes of The Walking Dead, there are few telling images that define the narrative arc of “Dead Weight” when Jeremy Podeswa’s camera lingers on a particular shot. In this episode, they all serve a singular purpose: strip any of the humanity established in The Governor last week to immediately set up the big mid-season conflict — and in doing so, reduce his character to the hilariously one-dimensional person he was in season three. More importantly, it undercuts the big conflict of the last two seasons — The Governor and Rick — by turning it into a petty display of masculinity, destroying any potential conflicts in future episodes beyond “guns and explosions and zombies… and oh yeah, a tank.”

Some of those telling images in “Dead Weight”? The Governor holding out a flame to light Mitch’s cigarette (reminding us that The Governor is indeed the one-eyed devil), him grinning as he beats Martinez with a golf club and feeds him to zombies, him standing above the zombies in quicksand, and the eye-rolling connection made between him and “MURDERER”, a family photo that closely resembled the one he burned but a week earlier.

The point is made pretty clear: The Governor never stopped seeing himself as judge, jury or executioner during his zombie-like adventures that opened “Live Bait”: it simply was buried under a layer of guilt (maybe?), easily shed once the chance to attain power was placed in front of him. And that doesn’t turn out to be much of a challenge: everyone gets drunk and conveniently leaves when The Governor puts a 9-iron in the back of Martinez’s skull (the town’s general reaction to hearing the news he “fell” into the zombie hole: “ehh… The Governor talks loud, we can follow him”), erasing any kind of tension to be found in The Governor realizing he was supposed to be “saving” these people as Martinez’s leadership failed. He’s simply murdered without a single thought, and then we’re moving on to The Governor’s romance (snore) and the daughter he swears to protect by attacking the people at the prison (bringing back the same holes in logic he had last season).

Which pretty much gives away the ending to the events of next week’s mid-season finale (titled “Too Far Gone”): no matter how many characters die in the inevitable showdown between the prison and New Woodbury, The Governor will fail once again. This isn’t some kind of spoiler: the parallel between his failed ventures last season and now are just too obvious to ignore — him emerging victorious this time around would not only kind of screw the show’s cast, but completely betray the narrative it has carried for the last 24 episodes.

The Governor has the same motivations as before: even though this time his “family” is alive, he’s still on this hell bent streak to protect his loved ones… and have zombies soaking in water, which is still weird. He’s got the same enemies (Rick, and eventually the people he’s taken as his willing hostages replacing the folks in Woodbury, we can presume), and he’s even got Crazy Eyes again, despite one eye being sewed shut (which his new girlfriend finds endearing, because of course). He may have survived his own downfall once, but nothing’s changed for The Governor — and while we could talk ages about how this is related to his relationship with his dead father (I won’t), it would assume a level of sophistication The Walking Dead never operates on (and one I’m thinking it isn’t now).

Everything about “Dead Weight” is concerned with connecting the dots between Rick and The Governor: showing him in the shadows outside the prison, murdering the potential leaders around his new town to consolidate the decision-making powers… it’s all obviously leading to the episode’s final image, where The Governor points his handgun at an unsuspecting, smiling Michonne (how dare a woman enjoy anything in the presence of The Governor!). There isn’t much of an attempt to characterize The Governor’s “new” life and motivations in any kind of way: although he seems repelled by MURDERER’s approach to life in the new world, he embraces it awful quickly after hearing about Shumpert’s death at the hands of Martinez. He commits the same acts (killing another former member of Woodbury because of personal perception, something he did in spades last season), and then heads off to do some head-shaking, staring at water, and lots and lots of glaring from behind his eye patch. The emotionally vulnerable person we saw for a few minutes in “Live Bait” is, unfortunately long gone, lost in a haze of repetitive storytelling and characterization that’s become a signature touch in numerous episodes this season.

-Â Â Â Â Â Â Â  The misogynistic undertones of The Governor continue to bother me: he’s completely fine with Mitch cursing at one of the women in the camp. More disturbing is how the writers have made every woman in the camp dependant on his decisions and instructions, clinging to the “safe” life at the camp while he instructs them on how to do different. It’s one thing to protect people: The Governor’s treatment of Andrea and other women in The Walking Dead establishes an unsettling precedent that “Dead Weight” continues to embrace, with no thought of how absurdly antiquated these bits are.