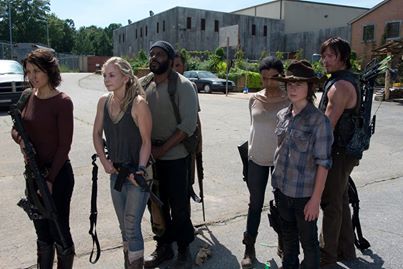 In the world ofÂ The Walking Dead, every single character we come across has experienced a great loss. A number of them, really: family, friends, community, society… everything that’s taken for granted in life suddenly disappears, the petty dramas of everyday life replaced by the physical struggle to survive, and the internal battle to maintain one’s sanity in a fundamentally broken world. In the aftermath of “Too Far Gone”, “After” pauses to take a good, long look at two deeply traumatized characters as their biggest, deepest fears suddenly come to life, threatening to consume them.

To accomplish this, Robert Kirkman (penning his second episode this season, after “Isolation”) and director Greg Nicotero turn the signature props of Michonne and Carl into symbols of their biggest fears. Michonne doesn’t just make two new pet zombies to keep others away: her nightmare reveals that her real fear is being alone again, after watching her second family get fractured by a psychopath and his tank. Once upon a time, she was a mother – and since the day she lost her husband and child, Michonne’s isolation has been her own karmic punishment for not protecting the ones she loved.

It gives a new wrinkle to the Michonne we’ve seen over the seasons: her reluctance to integrate with the prison group comes out of a place of personal responsibility and fear. If she couldn’t protect the ones she cared about with her “sword” skills once, how could she let herself be put in that position again? The only place she feels she belongs is among the dead: it’s not until she’s walking along in a small pack of zombies that she realizes what she’s forgotten about being human (and more importantly, alive). She literally sees a zombie version of herself (the episode’s one ham-handed moment), a mirror into an alternate world where a weaker Michonne was swallowed by her fear of permanent isolation, unable to recover from the loss of those who she loved and vowed to protect.

But it’s when she’s all alone that she realizes just how afraid of flying solo she is: those two pets were merely the company she thought she deserved, a reflection of the emptiness and helplessness (the zombie’s lack of hands and jaws) that’s followed her around since the death of her real family. She may not be afraid to die alone – but she’s certainly afraid to survive alone, which brings her closer and closer to The Governor territory as she becomes “one” with the zombies walking through the field.

The real focus of the episode, however, is on Carl’s biggest fears; like many people, there’s a dissonance between what Carl says and what Carl does that betrays his hardened persona in a similar fashion to Michonne, just more frequently. When Carl finally unleashes on his passed out father, “After” gives him exactly what he wants, pushing him into the open for a zombie-filled adventure of his own and forcing him to realize that no matter how weak or contradictory his father gets, he’s the only person he’s got left: and whether Carl wants to admit it or not, he’s emotionally tethered to his father (just look at his cowboy hat and side holster if you don’t believe me; Carl is molding himself in the image of his father, only “better”), his will to survive not extending to actually killing Rick (who is suffering from Mysterious Short-Term Coma disease), the one person Carl fears he will eventually have to gun down, which would leave him alone in the world, free to eat pudding and haunted (like Michonne) by the memories of a another family broken by the zombie apocalypse.

With its intense focus on two characters, “After” is an hour full of quiet parallels and strong performances, led by Danai Gurira’s always-terrific performance as Michonne. Despite less screen time, she steals the episode away from Chandler Riggs’ Carl, whose range is stretched to the max in a number of demanding, dialogue-free scenes (which he handles surprisingly well, continuing his rapid improvement as an actor). And where his performance can’t quite keep up, “After” does a terrific job filling in the blanks, with little touches like Joe Jr.’s letter to anyone entering the family diner he shared with his father, and the look on Michonne’s face when she sees Rick and Carl, the only ‘family’ she’s got left at this point. In the face of great trauma, “After” challenges two of its most important characters to move forward, throwing their darkest fears into light, a fantastic episode that shows just what this show can do when it’s focused and not concerned with melodramatics or empty visual thrills.

– sometimes all it takes is 112 ounces of pudding for one to gain some perspective.

– Carl, to his passed out father: “You were their leader… and now, you’re nothing!” This happensÂ afterÂ he unleashes an impressive string of obscenities, a hilarious bit of dialogue that sends Rick into a frenzy (seriously, he gets mad at Carl for cursing at zombies!)