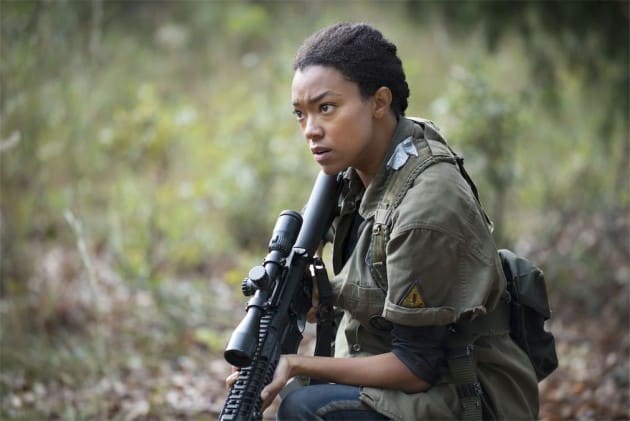 Over the last few years, Rick’s “we fight or we die” mantra in Season 3 has becomeÂ The Walking Dead‘s “We live together, or we die alone”Â moment: no matter how far the show strays from its original plot or characters, that thematic core always remains intact, a well the show can usually return to for powerful, dramatic stories about survival. It’s a philosophic testament, a moment whereÂ The Walking DeadÂ firmly states its purpose – and despite some short-term bumps on executing this idea, has become an important part of the show’s DNA in recent years, as it was in “Try,” a fine return to form after last week’s frustrating episode.

Where “Try” differs from “Spend” is simply execution: where “Spend” is setting up stories through a series of tropes and uncomfortably familiar choices, “Try” moves briskly from scenario to scenario, slowing down only to accent a point, or add some depth (and in some cases, visual panache) to secondary stories. It moves beyond the silliness of “Spend” and focuses on the ideological rift between Rick’s people and Alexandria (not to mention the graying lines between them), rather than the dramatics of introducing this conflict.

What happens is “Try” becomes aÂ muchÂ stronger episode, one with its focus on using character exploration rather than setting up melodramatic bowling pins, and it does so by creating a single philosophic through-line through each story and character, weaving everything from romantic little stories with Carl and Enid (that shot of them in the husk of the tree was beautiful) to the conflict brewing between Rick and Deanne together by exploring the mind spaces of these characters. It hasn’t taken long for the prison/Terminus survivors to grow uncomfortable living behind the facade of safety in Alexandria: after so much time in the wild, Rick in particular has become a caged wolf within the walls of the safe zone he’s currently “policing.” He feels like he’s living in an alternate reality, his attempts to keep people alert and on his side slowly fading as each character considers their own domestication – a conflict no better represented than Carol leaving a casserole on Deanna’s steps, then immediately telling Rick he needs to murder Phil.

As “Try” continues, it begins to expand beyond Carol and Rick’s whispering in the night, to extrapolate on these ideas of safety and compromise in a world where the living suddenly find themselves prey, the type one might find on an environmental protection list, had the EPA not been eaten by the undead already. Any animal not at the top of the food chain is subject to instinct, responding to fight-or-flight anxiety in ways that humans, the creatures living at the top of the food chain, just don’t do. Deanna won’t consider killing someone who is dangerous, particularly someone useful, the worst punishment she can think of is exile – a hypocritical idea that could either work, or lead to a thousand different types of terrible if the exiled person returned (seriously: are these people complete idiots? How has someone not ravaged this town already?).

This conflict between her and Rick is like Woodbury 2.0, engaging the debate between civilized and primal in an entirely new, slightly more ambiguous (though not really, if you think about it; Deanna and Jessie are both protecting an arrogant wife-beater) way. Is Rick willing to sacrifice Tara to rid the world of a person he deems “dangerous”? Has Rick completely lost any sort of empathy for human life (his apology to Deanna is so cold!) – he certainly looks like it, covered in blood and waving a pistol around before Michonne locks him up. Pete’s his full moon, bringing out the wolf that so many characters (like Michonne herself, who flashes back to all her old self during Sasha’s rampage) are trying to disguise in sheep’s clothing.

These explorations are infinitely more interesting than any of the more talk-heavy dramatics of The Walking DeadÂ – it’s what has made the season and a half so much fun to watch, asÂ the show learns to shorten its story arcs, eliminating most of its weaknesses (teleporting cliches, repetitive reminiscing, plot set-up) and focusing on its strengths (arresting cinematography, well-defined main characters, subtle ideological debates) by letting stories play out much faster than in its earliest seasons (or the 20+ episode Governor arc, which was such a hot mess thanks to the constant creative shuffling at the top). It leads to a fantastic scene of Rick and Phil beating the crap out of each other, and Rick going Crazytown Bananapants on everyone about the reality they’ve constructed for themselves: eventually, those walls will come down, and tragedy will prove the point they’re unwilling to accept. But is it up to Rick to shatter that peace they’ve found? He’s certainly not protecting Â Jessie for some noble reason (he even says he wouldn’t do it for anybody) – and in the end, his meddling only gets him arrested and throw into jail, likely labeled a violent outcast by a grieving Deanna (who gets a bunch of lies from Nicholas about what happened, and never talks to Glen before she gets angry and judgmental) and the rest of the town.

Glen certainly wants to think so: but there’s definitely something about his “we are them now” speech that rings false, something “Try” grips onto and refuses to let go for the rest of the episode. And it makes for much more entertaining fare than last week’s debacle; whenÂ The Walking DeadÂ is focused on thematic execution, it can be pretty impressive – just look at the parallels drawn between Sasha, Michonne, and Rick, and how they bring Sasha back from the edge of psychosis it wanted to tease us with earlier. Lose the empty melodrama, andÂ The Walking Dead‘s vastly improved writing is on full display: “Try” (written by Angela Kang, who also co-penned the excellent “Four Walls and a Roof” earlier this year) is a great example of that, inserting a number of welcome changes of direction (like the Phil story actually being a catalystÂ of a bigger, more important conflict), gaining a clear head of steam heading into next week’s 90-minute season finale.

– I didn’t talk about it much up there, but I wanted to mention it: all the scenes in the woods were fantastic, capturing the inner conflict of the prison survivors in living inside Alexandria, realizing that maybe, sometimes, killing the undead was a therapeutic thing for them, and not just something they’ve done strictly to “survive” (plus, this is their reality; in a way, it’s the only place they feel home, even if that means not being safe). Carl and Enid’s scene was also an episode highlight, exploring this same conflict from another angle, throwing an adorable moment on top when Enid whispers to Carl “You’re scared of me, too.”

– Just a random, all-encompassing thought:Â The Walking DeadÂ will probably never be great at the first or third acts of stories; however, the vast improvements it has made to the middle of them has raised the quality of the show a considerable amount. And in many ways, that second act is really the most important part: it’s where the majority of thematic exploration and characterization occurs, and that’s whereÂ The Walking DeadÂ has become a lot more consistent.