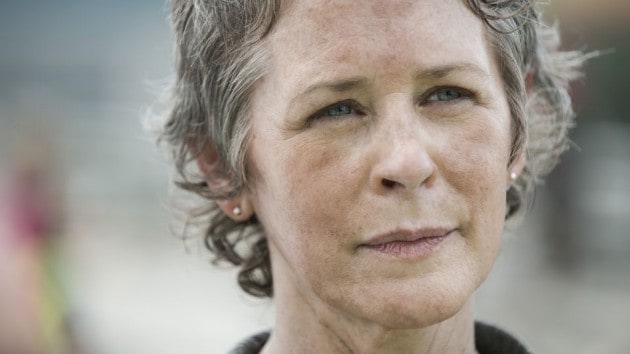 I’ve been quite a vocal fan of the character-focused approachÂ The Walking Dead‘s taken over its last dozen-plus episodes; so on paper, an episode like “Consumed” excites me to no end. Focused on the time between Carol leaving the prison and Carol entering the hospital Beth’s trapped in, “Consumed” follows two characters for the entirety of the episode, not too dissimilar in structure of episodes from season 4.5: unfortunately, it’s all delivered in such broad strokes, it’s one of the less effective pieces of its kind in recent memory.

Some of this stems from character history: as nice as it is to reflect on how characters were in earlier seasons of the show, lingering on Carol’s past characterization harkens back to a much lesser version ofÂ The Walking Dead, one where Carol was defined by her abusive husband and daughter that everyone spent a season looking for hopelessly. While the script goes to great lengths to show us how much she’s changed – since when is Daryl the compassionate one in a group? – it’s the kind of character development that is best left unspoken, best explained in the little details (and not ones like the camera glaring at aÂ book for survivors of child abuse; these add nothing to the character, even if she’s reading the book to help Daryl). It’s just not all that dramatic: we already understand what makesÂ thisÂ Carol and Daryl different than those in the first three seasons; I don’t need an episode that is otherwise deathly quiet to suddenly start dredging up past characterizations or conflicts, simply because there’s a lack of dots to connect in the 43-minute running time.

At its best, “Consumed” is quiet: the deathly quiet that hangs over the first half of the episode gives lots of room for performance, which Norman Reedus and Melissa McBride chew up with vigor. It’s really the saving grace of the episode, which is otherwise littered with oddly-placed flashback and a lot of clunky dialogue when characters do decide to speak. Thankfully, “Consumed” does a fairly graceful job when it comes to its actual purpose – getting Carol in the hospital, and sending Daryl and Noah back to the group at Gabriel’s church – although it doesn’t have much material to fill in the moments in between. Even this week’s zombie set piece, centered around Carol and Daryl desperately driving a van off the side of a bridge – isn’t all that exciting: given the dramatic build up, one might think they’d have a little more trouble landing the van and getting out of it on time, while the undeadÂ rain down upon them (something we’ve seen before, and arguably done better then).

By the time the episode reaches its conclusion, “Consumed” begs the question of whether I really needed to see this story at all. For example, had the episode been shown from Noah’s point of view as he followed the two of them around, there would be the same amount of character development with Carol and Daryl (since Noah could easily listen to their conversations, if the script had him stalking the pair a bit closer), plus the added benefit of giving Noah some dimension, even if he’s ultimately a character that exists as a plot device (that is, the conduit between Rick’s group and those at the hospital). However, that’s not the “Consumed” we got; and although “Consumed” occasionally pauses for its weekly exploration of lost humanity with fascinating discipline (and surprisingly forÂ The Walking Dead, silence), it’s largely a filler episode. Thankfully, it’s a filler episode that can exist without doing any lasting damage to two of the show’s strongest characters – although it’s not a rousing success on every level, it certainly exists without losing any of the season’s momentum or dropping its overall quality. It’s just an hour of killing time, with two fan-favorite characters – and even at doing that,Â The Walking DeadÂ is still much better than it was in seasons past.