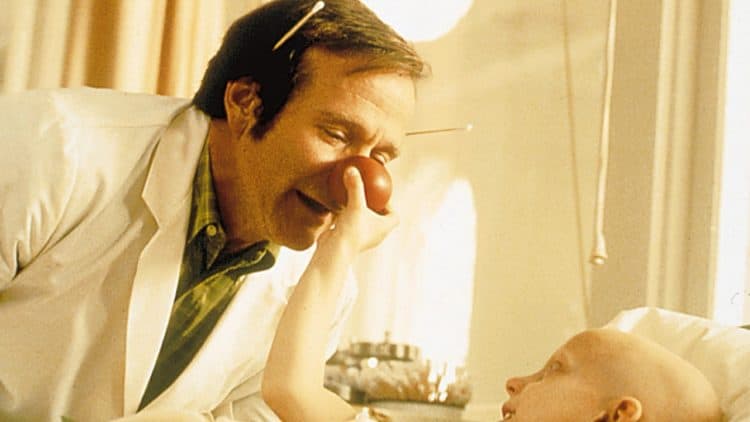 Sometimes the people who are hurting the most are the ones that show it the least. Robin’s Wish is the documentary of how one of the most talented and brilliant comedians and actors in the world came up through the business and how much influence he held over the years as he made his ascent. Most of those that knew of Robin Williams would have at the very least said that he was famous for good reason, though the comedian had plenty of doubters throughout his life. Through a great deal of hard work and pluck he was able to take those doubts and lay them to rest as many would go on to describe him as one of the most energetic people they’d ever met, and simply couldn’t understand the pace at which he lived and performed since at times it appeared that he had boundless reserves of energy that he could call upon. Unfortunately, as many people have already come to find out, and as the documentary will cover, Robin was dealing with a degenerative brain disease that worsened throughout the years and affected his behavior as well as his mood as many would go on to state that he just ‘wasn’t himself’ at times and appeared to be struggling now and then to really get by. The documentary will cover his final days it sounds like, but the hope is that we’ll also get to see a bit more about his life and how the disease took him from being a happy go lucky kind of guy to someone that was struggling just to keep it together at times.

The truth is that Robin Williams was one of the best comedians that will ever come in our lifetime since he went from one end of the comedic spectrum to the other and entertained a mass number of people in the process. There weren’t a lot of people that openly disliked him in relation to those that believe that he was one of the funniest people they’d ever seen. He could be crass and bold at times, but he was a great actor when it came to family movies as well as his many appearances could attest to. This was a man that made a world laugh at one point and kept on doing it since he chose to make laughter happen in order to stave off whatever depression he might have been feeling. It was something of a revelation to learn that he was depressed in any way or that life had ever been hard for him since Robin was the type of actor and comedian that made what he did appear so effortless, as though he was born with the talent to become a comedian and was finally content to do so once he’d reached a certain age.

It’s been six years since Williams committed suicide, but the autopsy and the reasoning behind why this happened will be featured in the documentary as the changes in his behavior and demeanor will be explored as well from the perspectives of several different people. There were a great number of people who were concerned about Robin during his final days, and several of them will knowingly admit that they felt that they should have said something, done something, or perhaps simply acknowledged that Robin was acting differently. It might have cleared up a lot of the speculation that took place, or it might have made matters worse to let people know that something was going on. Who knows? Playing the what-if game is something that’s best left to those that love to ponder over the many different roads a life can take and what might influence a person to take one path over another. Robin Williams made his choices as best he could and given what he was dealing with it’s impressive to see how he reacted and the kind of good that he tried to create for others. This was a selfless man as far as anyone could tell, and his endearing spirit is what needs to be put on display in this documentary in order to give people the idea of who he was and what he did for so many.

There have been other documentaries detailing Robin’s life and what it meant to so many, but this one will take the details from the rest and break them down quickly in order to show people just what he was dealing with and how it affected him in a way that could only be described as terrifying in a way since there wasn’t much of anything that could be done to help. Likely as not there won’t be a lot of dry eyes once the documentary is over and done with, and there will be plenty of speculation.