Home
TV News
Whatever Happened to the Cast of Andromeda? 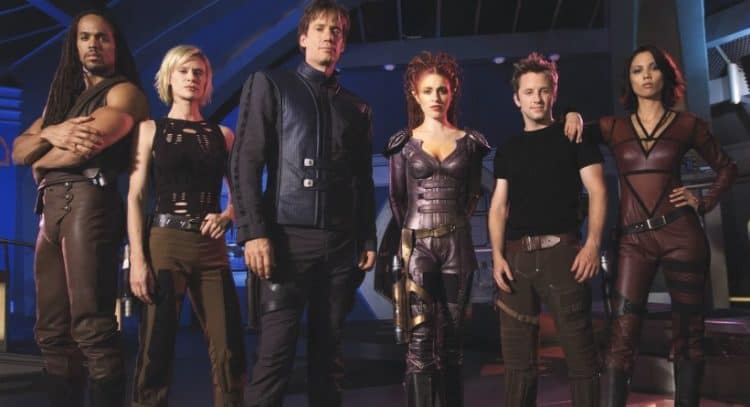 It’s been a while since Andromeda went off the air, but many fans still remember the cast fondly. The story centered around the peace between planets in the Systems Commonwealth that was broken suddenly when one planet decides to try and take over the Commonwealth. Captain Dylan Hunt and his ship, the Andromeda, are caught in the first engagement but are somehow lost in the event horizon of a black hole, stranding them in time as the universe they know virtually ceases to exist. Over three hundred years later the Andromeda is found by a salvage crew that also finds Hunt. The universe is a changed place from what he remembers, and the Andromeda has now become the only hope of restoring order to a what remains. The show was yet another heroic rendering of a crew that had a set mission and goal to attain, but it didn’t last all that long until the show had to fold up and move on.

The only question after that was how the cast fared and where they moved on to.

As far as TV and film go Keith went on to do a few guest roles here and there but didn’t ever attain any big time fame. It’s been said however that he took to theater and has been enjoying that for a while. Not everyone goes on to fame and glory after their time on TV.

As far as movies go Lex hasn’t don’t much, but when it comes to TV role she’s more than paid her dues and should probably be making her move to become a lead or at least one of the more serious supporting actors. She’s managed to show up in some very popular shows and she’s been in a number of TV films that have gotten at least a little attention. One of her big claims to fame was starring in the ill-fated Jason X, in which she was one of the only bright spots, the other being her Andromeda costar Lisa Ryder.

Much like his costar Lexa Doig, Gordon has been a lot more influential in TV than he has in the movies. He’s even played on the same show that she has, Supernatural, though in a different episode of course. Also like Lexa he managed to land a role in a horror franchise that wasn’t particularly brilliant, the Bride of Chucky. One thing you’ve got to give a lot of these folks is that they’ve kept going with a career or something they like to do, which is pretty inspiring.

Laura has had a modestly successful career since Andromeda and had one before ever going into the show. To be honest it’s actually very successful even if some of the shows and movies she’s been in could possibly classify as those that don’t get watched by much more than the people that are looking for something that’s not flashy or otherwise completely mainstream. She’s staying busy though, and that’s something.

Like it was mentioned above she starred in Jason X with her costar Lexa Doig as Kay-Em 14, an android that wanted to be a real woman and in the end wound up going toe to toe with an upgraded Jason Voorhees. She lost of course and lost her head in the process, literally, but thankfully since that film she’s been doing great and since Andromeda she’s even landed roles on shows like The Strain and Alphas.

One thing a lot of people don’t know was that at one point during his Hercules run he had an aneurysm in his shoulder of all places that caused no less than four strokes. The actor was so weakened that he had to disappear for a few years to recover. By the time he came back people were amazed to see him again, but thankfully he recovered and has been doing fine since. His career has been doing just fine as well since he’s been quite busy and is still currently in the business. At one point and time it was believed that Sorbo was going to be one of the biggest action stars around, and when he seemed to fall off the map it was rumored that he’d been a phase and was all washed up. If not for the aneurysm it’s possible that he could have stayed on top and really become one of the kings of TV.

Andromeda had a chance to be one of the great TV shows of its time but the downfall, in part at least, was that scifi shows come and go all the time and their success is based largely upon the fans it seems, and the reactions they give. It wasn’t a bad show, but it could have been bad timing.