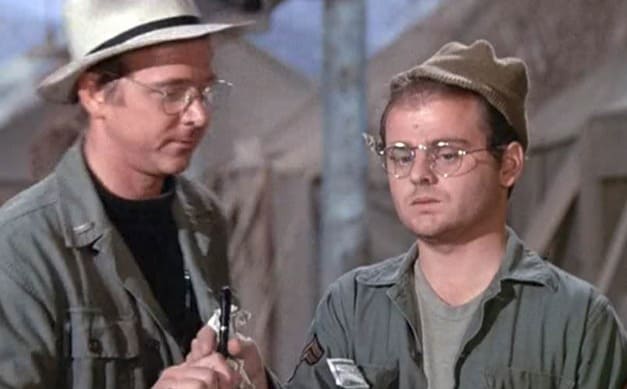 So what ever happened to Radar? You know, that little squirrely guy from M.A.S.H. that was kind of like the odd man out but was still someone that everyone depended on? He didn’t look like he belonged in the show but quite honestly he proved himself quite often despite his amusing little quirks. Gary Burghoff was on the show for much of its duration but eventually left due to burnout. This tends to happen to some actors that are so invested in the show that it becomes all they know for a while. Eventually it just becomes too much as the monotony wears on and the pressures of keeping the show alive continue to mount. At one point many actors have likely asked themselves what they were doing and if it was still worth it. That’s part of it but that wasn’t the whole truth. He also had a desire to spend more time with his family as well. He would eventually return to film the special two-part farewell episode though. In his words he needed to take a break in order to take care of his family and be around a little more. It’s easy to see how being an actor could take a person away from those they love far too often, and Burghoff wanted to spend the time he had with his loved ones.

Mike Farrell tried to get Burghoff to stay when CBS decided to expand the farewell episode into two different episodes, but Burghoff had had enough at that point. Even being considered as one of the best parts of M.A.S.H. he was still convinced that it was time to go. Honestly when a person reaches their limit they have to think about what’s really valuable to them and make their decision based that rather than on what’s good for business. His career didn’t end there however as he went on to make TV appearances on shows such as Buzzer, the Match Game, Hollywood Squares, and a few others. He was even seen on an episode of The Love Boat. So leaving M.A.S.H. wasn’t the end, but it was kind of the end of his huge run at popularity since by the time the show was over people were already starting to move on and find their new idols to look up to. That seems to be the way it is in Hollywood though, as long as an actor stays for the right amount of time and does what people want them to do then things go just fine and they’re remembered as one of the best.

The trouble comes when they leave before people want them to or over-stay their welcome. As it’s already been seen the audience is notoriously fickle no matter what era we’re living in. TV shows come and go so frequently anymore that getting to know the actors becomes secondary to enjoying the story. That’s been pretty normal for a while but it’s still something that’s kind of a sad testament to the careers that are ended too quickly or last for far too long. People want their favorite actors to stay, they want them to retire when it’s necessary, and if possible they’d probably have them hop from foot to foot just for their pleasure. Burghoff made the right choice honestly and got out when he felt it was right. Just as it goes with any profession, it’s time to move on when you feel the need. Thankfully he had other things to go to and has stayed fairly busy after leaving the small screen. He’s done a few movies, been on a few TV shows, and has even been the spokesman for BP gasoline and IBM computers. He was even a spokesman for the dot-com era site PriceRadar.com. Come on, we should have seen that one coming.

At this point he’s become proficient in wildlife painting and is also qualified to handle injured wildlife, but only in California it would seem. Burghoff has also gone around as a professional jazz drummer and is an inventor of a few different things. He came out of retirement in 2006 to star in a film called Daniel’s Lot, but up until that point he hadn’t really done a whole lot when it came to TV and film. Quite honestly he’s been under the radar, shameless I know, and has been living life on his terms for the most part. At this time he’s in his 70’s so it seems easy to say that he’s doing what he wants and just taking it easy while possibly enjoying his golden years. Back in the day he was one of the best characters of all time on M.A.S.H., but like every part that’s ever been written it had to end eventually. At least Burghoff got out when he felt the time was right.