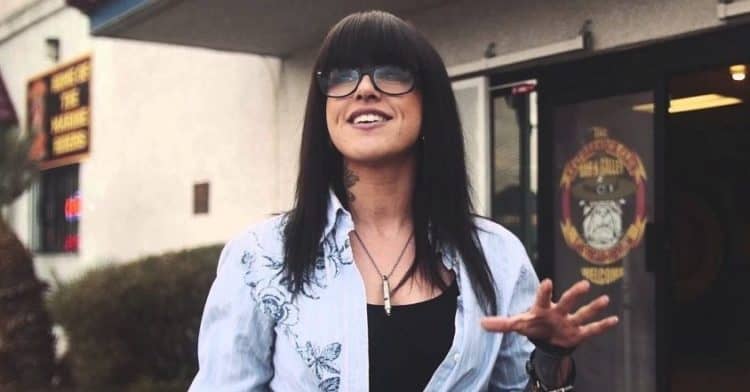 Lately it’s been seen that what people do with their lives in the past or present seems to be enough for a lot of folks to get into a discussion about and even use to pass judgment on others. Olivia Black from Pawn Stars is one such individual that seems to have suffered a bit for this kind of attitude since it seems that her life, from a professional standpoint, was put on blast during her time on the show. While she was likely brought in for sex appeal, she is quite attractive after all and has a great deal of energy and a very winning personality, it was also apparent that she was kind of a colorful individual that did have something of a life that the producers questioned. However it makes no sense to have fired her for something she’d done in the past, no matter what it was. She was brought on by the show to work in the shop and was even mentored by Chumlee, learning the job and working the night shift. The fact that a background check would have brought up pretty much anything and everything on her past is point of contention that doesn’t make much sense from a business standpoint.

The reason Olivia was fired was that she was a part of the adult film industry and the producers seemed to think that this was a black mark on her record that they couldn’t stand to have on the show. None of her co-workers cared it seems, they were just fine with it since her life was her own, rightfully so, and nothing she did in the industry was disturbing her time at their shop. The producers however seemed to think that it was perhaps immoral or unethical to have a woman that had been in adult films, though to be quite honest it should be none of their business unless it happens to interfere with the show. But, being what it is, Olivia was let go from Pawn Stars and sent on her way. Thankfully she didn’t harbor any ill will towards the crew she worked with, but she was about to file a lawsuit against the producers of the show for wrongful termination. The downside of this however is that for all the loopholes that exist for actors and talent, there seem to be more for producers when it comes to who they can hire and fire and what reasons they can use. One might almost think we were still living in the 1950s, or perhaps all the way back in the early 19th century, given the rules on immoral and suspect activities that are sometimes used. People realize that those that lead the country have done far worse than anything Olivia Black got fired for, right?

Be that as it may she’s been seen as a TV personality all the same since and has been very active on social media. She’s also spent a great deal of time with her wife Maria and has for the most part done what she can to stay relevant and enjoy a decent life. The idea that she was fired over her days spent in the adult film industry however is still somewhat ludicrous since it seems to beg the question of ‘why does it matter?’ when it comes to trying to connect the two and falling well short of anything that could be deemed even slightly harmful. Had she been starring in a kids’ show then perhaps a few eyebrows raising wouldn’t have been so hard to believe, but even if she was there to do a job and make kids happy then so be it, that was what she would have been there for and nothing else. But she was on PAWN STARS, a show that’s not known for being so over the top raunchy but also isn’t known for being the kind of show that caters to kids or to those that are unable to hang with the kind of rhetoric and ideas that might upset their delicate sensibilities.

At this point it almost seems as though the networks that hire people are being run by those that can’t seem to understand that the world has changed a great deal and what used to be taboo is now being more widely accepted by a lot of people. So she was in adult films….who cares? Was she ever lying on the counter naked looking as though she was read for the director to yell ‘action’? Nope, she was there doing her job and learning the business in order to be useful to the show and to the crew. Getting bent out of shape about it on either side isn’t a great option but to be honest it’s kind of saddening when a person’s past is used against them in this manner. Yes Kavanaugh fans, you read that right.