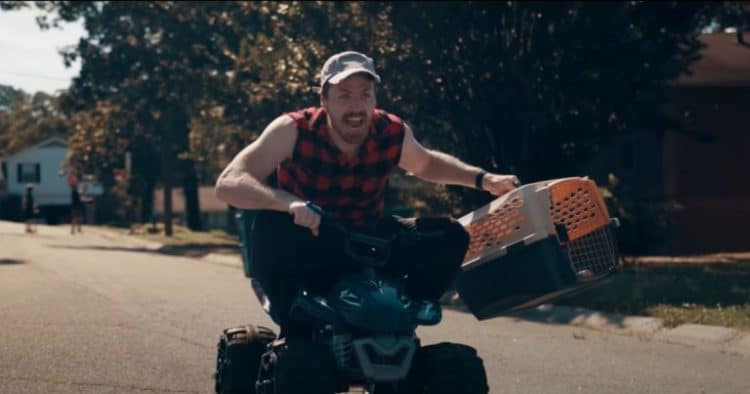 So what if Grand Theft Auto was able to be played by everyone and no one had to worry about violence or the kind of subject matter that people have been up in arms about over the years? Well, it’d look like a cartoon version of GTA, plain and simple, and one might have to wonder who pushed the wrong sequence of buttons to get to this mode. That’s kind of what it feels like since instead of typing in a blood code as was seen with Mortal Kombat back in the day, someone would have to type in the ‘everyone’ code for this mode, and it’s likely that a lot of people would play it simply because it is something different and might be okay for kids to play without fear that they’re going to think that it’s okay to rob and loot people. Cue the eye roll, since as amusing as this clip is, and it is to be certain, GTA is still one of the more popular games out there not because it shows people how to get away with crime, but because it’s fun and engages the darker side of humanity as so many other games do. Video games are a fantasy, a world that allows people to do what they want without fear of reprisals or the law, unless of course they’re playing online and decide to do something illegal or aren’t prepared for the reactions of players from half a world away that don’t appreciate their accounts being hacked or their supplies being jacked. There’s a reason why some folks don’t enjoy playing online despite how easy it is, since the fun of a video game is sometimes just playing and not having to worry if someone is going to kill your character and steal all your stuff.

Grand Theft Auto has been a game that many people have had a serious issue with for a while since to be fair, it is a pretty violent game and it does show a few things that are kind well beyond the norm. But like anything in the gaming world, it’s a game, something to have fun with, something to create a fantasy world, and if parents are paying attention, it does have a rating that they can use to gauge whether or not they want their kids playing it. The whole idea of playing a violent video game isn’t to turn people violent, and as studies have been showing for years now, many people don’t believe this happens anyway since the whole idea of ‘video games rot your brain’ or ‘video games cause violence’ has been debunked more than once. Sure, too many video games can stifle a kid’s growth and development if there isn’t a healthy balance of the real world and the video game world, but overall, video games are a nice release for many people since they do offer a kind of therapeutic and kind of cathartic experience that allows a person to switch up their thinking as they navigate an imaginary world that sometimes looks like the real word, but doesn’t come with the very real carnage and issues that go with it.

I might have said it allows people to switch off their brains, but many games don’t necessarily allow this since it does take a bit of thinking to navigate a good number of them since video games involve problem-solving skills, using deduction to sort out a problem, and plenty of ways to sharpen one’s skills and senses considering that some games require a player to listen and pay attention to very fine and sometimes hard to see details that could mean the difference between winning and losing. The overall experience of playing a video game is that it’s fun, it’s educational in some sense of the word, and it’s a way for a lot of people to blow off steam in a number of different ways. Grand Theft Auto is definitely problematic to those that see video game violence as a problem, but has anyone played Mortal Kombat lately? The most recent installment features fatalities that are beyond gruesome and put to shame anything that can be seen on the streets of GTA. But since GTA mirrors real life it’s more likely to hear from people that it’s not an acceptable game because it’s simply too realistic in nature and younger players might actually try to emulate some of the things they see on the screen. The saddest part is that people will buy such a statement hook line and sinker without bothering to think why it’s simply not true.

But if GTA was made for everyone? Well, that would certainly be a different ballgame since it would introduce the idea that bad guys might just go ‘poof’ once you hit them. Yeah, that’s way better. Hopefully you hear the sarcasm.