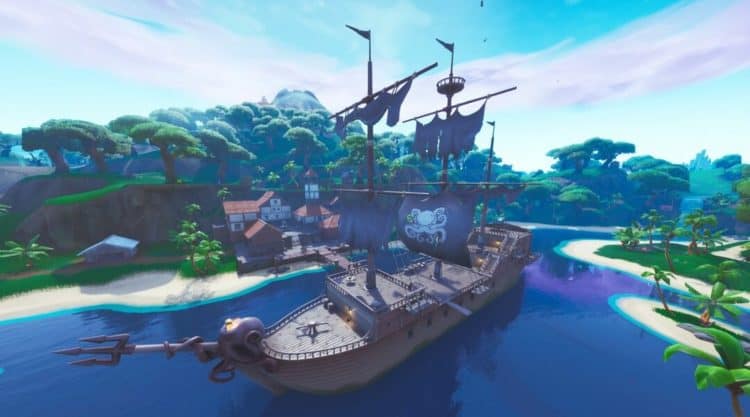 Fortnite entered the gaming scene in late 2017 and has exploded in popularity ever since. This is a multiplayer game developed in North Carolina but now is played around the world. It is a type of survival game where each individual needs to collect a series of resources in order to stay alive. You will also make your own tools and weapons in an effort to stay alive as long as possible. The game might be played on Earth as we know it today, but most of the people are gone. In order to stay alive, the core objective is to collect the materials necessary to sustain life. One of those items, of course, is the private cannon. We are about to tell you where to find all of the private cannon locations in Fortnite.

The Lazy Lagoon and Sunny steps were recently added to the Fortnite map. Alongside those was a new portable weapon that will prove to be most useful to those playing the game today. This is the pirate cannon. This one weapon is able to fire cannonballs at other locations and people. If you do direct damage to a location, you will collect 100. Above that, 50 points will be granted for a hit from the pirate cannon that makes a hit in the general radius of where you were aiming.

The Pirate Cannon was introduced in season 8. During the week 2 challenge, players were tasked with the job of dealing 100 damage with the cannon itself. To do this, a player just needs to find a way to get off one direct hit off. Alternatively, two hits within a certain radius will do as well. Naturally, games like Fornite are rarely as simple as it sounds. This game is no exception. That is because the Pirate Cannons are actually only in certain locations. You might be able to find the cannon, but it will be another problem using it against another player who has a cannon as well.

The Pirate Cannons are actually spread out across the island. That is good news. However, there are a few areas on the island that will make it easier to complete this challenge. There are some Pirate Camps that will possibly contain some of the cannons that you need. This makes them an ideal location to go to if a player can get there first. You will also find plenty of the Pirate Cannons available on the ship that is located in the Lazy Lagoon. That is why we mentioned that particular location from the beginning. In fact, this might be the best location to begin your search for the Pirate Cannons, but keep in mind that it is also the most chaotic of the possibilities. It is not easy to complete the Fortnite challenge from the Lazy Lagoon. If you want to remain in relative safety while you search for the Pirate Cannons, you will want to work your way over to the eastern side of the ship itself. This is where you will typically be able to find a few of the cannons. These can then be used to fire away at the Pirate ship as you wish.

Beyond this, there are a few other places that you find that will randomly have the Pirate Cannons appear. This is also where a player can complete the Fortnite challenge, so make sure that you are on the lookout for these. Keep in mind that you will want to complete this particular challenger, in addition to the other challenges that are laid out in front of you, if you want to college the hidden banner that goes with Season 8 Week 2.

We do want to also mention that there are many players who have noticed the Epic Games, the creators of the Fortnite game and subsequent challenges, has recently added a Treasure Map item to the mix. When discovered, this will allow the player to then find some high grade weaponry that will enable them to soar about the competition within that particular match. This demonstrates that the latest challenge for Fortnite is well underway.

Hopefully, this will help you locate the Pirate Cannons that you need to complete this challenge. Enjoy the adventure. There will be more challenges to come from Fortnite in the weeks and months ahead.