Home
Comics
Who Would Win in a Batman Vs. Iron Man Fight? 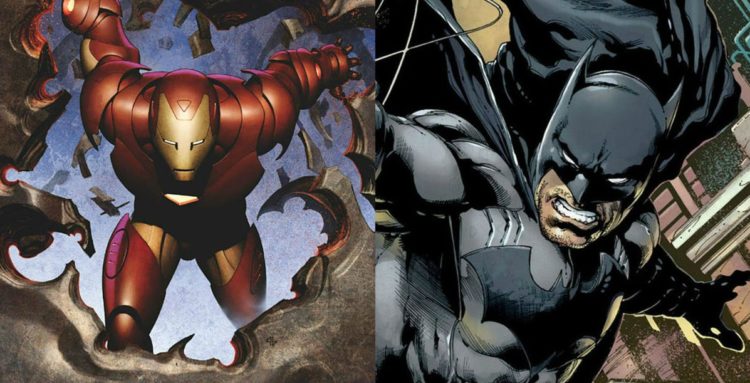 Iron Man vs Batman, who ya got? That’d be the question on many minds if these two heroes ever met up and you can easily imagine that the room would be instantly divided upon who would come out on top. Early on it might seem like those claiming Batman would win would be spouting “Because, he’s BATMAN” in their best growling imitation of Christian Bale. Others however might point out that Tony Stark has held a lot more powerful characters than Batman to a standstill and come out on top eventually. After all this is the guy that, in the MCU, has gone toe to toe with Thanos and, despite losing, did manage to draw blood. It’s a real toss-up though because, quite honestly, the only real limits on either of these characters is the skill and imagination of the writers.

But let’s take a shot at it anyway.

Let’s say that the two heroes go in cold, not knowing what the other can do and having no idea what’s coming. You say that Batman has a tool for every situation and you’d be right, the guy is paranoid, or, ahem, prepared for every eventuality. But when it comes to Iron Man, Tony Stark is able to adapt and overcome pretty easily at times. This is a guy that built an arc reactor to save his life and then crafted an iron suit that decimated a camp full of armed soldiers with massive amounts of firepower at their disposal. But then again, Batman usually has an edge since he’s a superior fighter and just thinks and thinks about ways to get the job done. That sounds like kind of an obsessive and boring life really but it’s served him well so far.

Now, both combatants going in cold and having no knowledge of one another, it has to go to Iron Man since despite the fact that Batman has an EMP, Iron Man has been seen to shake these off, and has even developed armors that are immune to such effects. But then you might counter with the fact that Batman is at the peak of human physical perfection and could straight up beat Stark in a fist fight, which is true. Tony vs. Bruce isn’t even close as Bruce would mop the floor with him. But Batman punching an Iron Man suit into submission seems a little far out of the realm of feasibility. Batman might get a couple of good shots in before Tony’s suit comes back online and starts to analyze Batman’s fight patterns. Remember, it did this to Captain America and then Tony proceeded to wipe the floor with Cap. But then you might state that Batman knows how to adapt too and would likely go to his utility belt and other devices to even it up. At that point it would come down to who was quicker on the draw, Tony with an attack, or Bats with another gadget. Given that it takes at least a couple of seconds for Batman to switch tactics and and all Iron Man has to do is deliver a chest burst or some other form of attack, it would seem that Batman would have to go on the defensive.

But then of course we get the idea that Batman has his own armors as well, and yes, we’ll talk about the Hellbat. But in order to do that one has to remember that as great as the Hellbat armor is and for what it’s done, it’s never faced the kind of legion that Iron Man can produce since there are more Iron Man suits in existence than Batman could possibly know about, and they all have different functions. Even in a prepared fight with the Hellbat armor Batman seems like he’d be hard-pressed to win this fight since the idea of the Hellbat armor being hacked isn’t beyond the realm of belief, as Stark has hacked into numerous different systems while on the go and in the midst of battle. If there’s an advantage to be gained it would seem that Tony would be a step ahead of Bruce quite easily since both of them are extremely intelligent, but Starks’ armor is a big boost to his already massive intellect.

So even pitting the Hellbat armor against Iron Man doesn’t seem like it would be quite enough, since if you’ll recall the armor does drain Batman horribly and it would become a waiting game for Iron Man, who’s proven that he’s good at keeping his distance and using the many weapons in his arsenal to keep from engaging in a one on one slugfest that Batman might win even if Iron Man analyzes his fight patterns. In this scenario, and many others, Tony could likely wait Bruce out and map out his different movements before Bruce ever made them. It’d be a giant chess game between the two men, but in the end it does seem that Iron Man has the edge.

But once again, it’s all up to the writers.