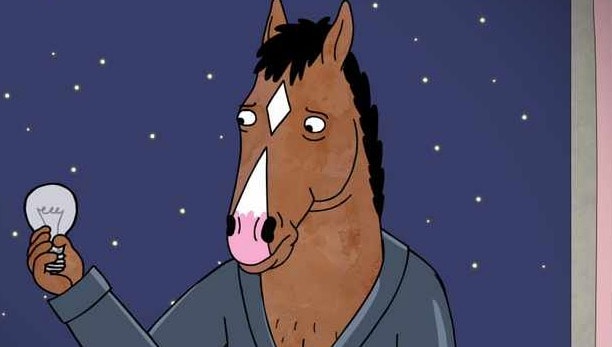 If you ever tried watching just the first and second ever episodes of the highly acclaimed, followed and popular animated series Bojack Horseman, you may be left wondering what is so special about it. The animated series did not have a great debut, and critics weren’t all nice and cozy with it at the beginning. Fast forward five seasons later, and people are arguing that the animation show maybe just superior to Rick and Morty. Any fan of Rick and Morty probably thinks, with good reason, that it is the best-animated series. Such fans may even stop watching Bojack Horseman by the third episode and erroneously make a conclusion that it is not. If you are one of those folks, you better just sit back and relax because from the fourth episode onwards, you are likely to develop the belief that comic and animated sitcoms will never supersede the creativity, thoughtfulness and sensitivity exuded by Bojack Horseman.

A great television series deserves to be watched from commencement to finish and it would be a great disservice to fandom if I leaked massive spoilers. However, since we are all in anticipation for the Season Six Premiere of this superior show, spoilers are bound to spring up in abundance. Therefore, we go through some reasons why Bojack Horseman is a superior show, you probably want to catch up with the animated sitcom. It would do you an immense service if you watched it before we get into the nitty-gritty details over why this show is iconic in the very least. The following are 20 reasons why Bojack Horseman is a superior show.

The animation is really a 21st-century mode of entertainment although it spans from many centuries before. Animation is a literary device just as it is a medium of communication by itself. It brings life to themes and societal concerns without directly inferring to the living. Animation gives creators the freedom to directly tackle elaborate human issues without the strife and conflict attracted by those who are its subject.

This may be a bit controversial to say because of the show’s dark sentiments on serious societal concerns. However, the show is full of jokes from the onset, and you may be mistaken to think it is a strained and failed comedy show from the way it started in season one. However, with time, fans begin to understand that the comic it offers is just a relief from the main plot that seeks to tackle serious stuff. The frequently told and practical jokes will still crack you up from time to time; just don’t watch it expecting comedy to be the main play.

This is not your usual comic show. Bojack Horseman is very dark and harsh, and the jokes told are dark as well. When put out of context, the jokes may even seem bizarre and inappropriate. However, the subtle and subversive humorous jokes are greatly contrived. They come in puns and gags that are delivered effortlessly yet effectively. They make the show generally funny, and this show may just brighten up your day.

The show is about a self-loathing horse that is afflicted by chronic alcoholism. It is centered in a familiar but mythical world called Holly Woo, and the name is missed the letter d because it is somewhere busy in romantic escapes. The horse is about fifty years old, and Bojack has a parasitic roommate. The main protagonist is frenemies with Mr. Peanut Butter who is also an unorthodox character. Do you get the gist of it? You should definitely watch it.

There is one thing for sure; Bojack Horseman gets darker every passing episode. The most light-hearted episode on the animated series is actually the first one, followed by the second. By the end of the first episode, you are likely to come to the realization that you are not watching a comedy show. Bojack Horseman is not a comedy; it is a tragedy drama! The humor, satire and jokes are just fads created for comic relief that is used to reveal very harsh realities.

We all know how superior a show Rick and Morty is for ingeniously relaying its nihilistic agenda. Well, Bojack Horseman is also a superior show because it takes a totally different direction of originality. It also uses ingenious literary devices like dark humor and satire to express how purposeful life is. That is why Bojack Horseman is so depressed and self-destructive; he knows he hasn’t lived up to his purpose. There is no way you can tell Bojack’s story the same as Rick’s. You just have to be original and unconventional.

Bojack Horseman was purposefully created to test your patience with the first three episodes. The plan worked, and Bojack Horseman was heavily criticized when the first three episodes aired. Still, the critics acknowledged its entertainment value. They soon realized, just like the rest of the world, that the sitcom rewards those who take time to watch it. More people watched episode four than the previous ones, and it is most probably because of the critics. They enjoyed it more as they began to understand the characters and the setting from a more thoughtful and indulging perspective.

8. The voice talent is exceptional

Of course, animated series are acted. Who didn’t know this? The characters must be unique, and their voice qualities must be personable. Bojack Horseman features very talented actors who do the voices convincingly and compellingly. Some of the voice talents include:

Well, since the Bojack Horseman is situated in Hollywood, it must keep offering plenty of superstar features. Do you know what that means for any superior show including animations? The actors must be great in mimicry. Well, Bojack Horseman has plenty of mimics to go by, and it can invite as many ‘global icons and sensation’s as it likes. Why else would its plot and theme be centered on satirizing Hollywood and the popular life?

Bojack Horseman is the reason why this animated sitcom is so popular. He is the weirdest cartoon character that one could imagine. However, he is also very personable even though the first glance at him would make him seem alienable. Indeed, he is overly alienable, and that is what makes this horse so human. I guess there is a Bojack Horseman is each and every one of us, but we must assume that are better than him. If not, we would be admitting that we are more depressed and damaged than him and his friends.

Bojack Horseman is a show that you can watch repeatedly without getting bored. The sitcom is fortunately renewed for Season Six. Do you know what that means for those who like taking weekends or holidays off to binge watch TV? You have Bojack Horseman to entertain and shock you. The sitcom is one of those rare TV series that qualify in the short and demanding list of shows to binge-watch.

Since Episode One of Season One to the highly anticipated episode six, this show features exquisite flow and exceptional continuity. Maybe that is why it is so interesting; fans cannot resist binge-watching it. It eliminated the redundancy that involves reintroducing characters. The continuity is enforced by its thick and deep plot involving a self-destructive celebrity who is depressed and obsessed with getting attention.

If you’ve been watching Bojack Horseman, you’ll realize that this show is well researched and founded on psychological studies. It is not your typical silly cartoon, and even Rick and Morty is more suitable for audiences seeking silly content. Bojack Horseman is thought-provoking simply because of what the characters say or do. It is a serious show with real acting.

14. It is based on an actual human being

15. It is based on Hollywood

Isn’t interesting that we have a once-famous and famous-once-again horse to relate just how tumultuous the popular life is? Well, I guess it is an interesting perspective away from the numerous reality shows we watch to understand Hollywood. In fact, this show kind of makes the jealous and star-stricken fans thankful for their normal lives. Maybe Hollywood really is that depressing and gloomy. Some of the celebrities ripped apart on the show include:

The creator of Bojack Horseman took a very big risk basing a dark humor sitcom on his life. Making a horse for his animation is even ballsier. He is really inspiring, and thanks to heavens for his brilliant script writing. It paid off big time, and the world can’t have enough of Bojack yet.

In the sitcom, Bojack Horseman is always trying to make a comeback. He is tired of being the washed up star everyone used to love. He takes big risks and seemingly self-loathing actions that ultimately see him becoming famous once more. With time, he even starts collecting acting accolades that are even bigger than the time he starred on Horsing Around.

18. We go through what bothers Bojack

Who dares judge the self-loathing, self-centered, attention-seeking, alcoholic and depressed horse? Who doesn’t have that jilted ex-lover who keeps coming back for more drama? Who never had to put up with a misguided roommate who always tried leaching like a parasite? One way or the other, we all have gone through the struggles that the Horseman faces. Maybe the only difference is that we face such problems differently.

Through its typical literary devices, the popular sitcom has had some positive influence on internet users. Of course, this show may seem overly negative in its tone and satirical in its prose, but it does so for social consciousness. Internet users can stream Netflix and come across social commentary that is so superposed that it is borderline impeccable. Bojack Horseman tackles serious issues like the bizarre celebrity culture, mass gun violence and body shaming. Other pertinent social issues that the Netflix sensation addresses include: racism, depression, sexism, self-destructive behavior, trauma, addiction and the human lived experience. We can say it is a powerful medium through which to form and mold opinions and attitudes towards socially-centered debates.

Lisa Hanawalt is a brilliant cartoonist who designed this exceptional animation series. Bob-Waksberg is the creator of this series and the life upon which the show is based. He is a literary genius just as Lisa Hanawalt is an outstanding cartoonist. Do you know what they have in common? They were childhood friends, and they went to High School together. Lisa knows a majority of the people, incidences and escapades upon which the drama is based. How else do you think the series managed to create such weird yet personable characters like Bojack, Princess Carolyn, Princess Carolyn and Mr. Peanutbutter. The characters are actually three dimensional; you will think of real-life people who fit the roles of the characters.