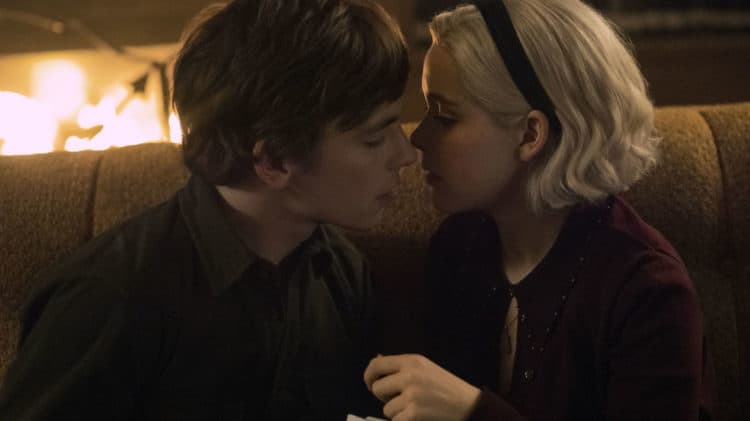 First off let’s start by saying that this is not the same Sabrina that you grew up watching as a kid and might remember from Archie comics. While the show does manage to stick with the character and make it exciting it definitely takes the story to a darker and much less friendly place despite keeping it entertaining and engaging. Jennifer Maas of The Wrap is one of the many to admit that things surrounding Sabrina have gotten a whole lot crazier and a lot darker than we might remember them being in the past. Of course if you really want to put Sabrina into the genre where she belongs the whole cutesy act had to go eventually. In the Archie comics she was allowed to be one of the more popular characters that was still innocent and mostly fun without going into the deeper witchcraft angle. But in this new show she’s definitely getting a wilder side so far as the show goes.

Jacob Oller of SyFyWire just adds to the mix when he talks about the events that happened near the end of last season and goes into description so as to remind people that season 1 is going to have nothing on season 2 apparently. When it comes to the darkness that is about to be unleashed and spread around with great relish you can easily imagine that in Sabrina’s world things are about to get insanely tense. The whole idea of the Dark Lord coming out to wreak havoc would likely get many people to watch that haven’t even bothered yet, especially since this character is known to so many people and is no doubt a favorite that some would love to watch yet again. It would be a wise move for those that know about the show to inform those that have never watched it though that this Sabrina is quite a bit different than the one that came before. Melissa Joan Hart was a pretty decent Sabrina in her time but she wasn’t required to go dark like the current actress who is playing the role now.

A lot of people seem to be getting a bit giddy over this and Dusty Baxter-Wright from the Cosmopolitan is just one of them as she goes on to describe the doom and gloom feel of the second season as it rides in on the tail of the first. In all honesty it looks as though the second season might be setting up for the kind of momentous run that would use the first season as a simple introduction into the world of the teenage witch that so many have enjoyed for so long. This show is definitely taking things in a direction that is more akin to what people are used to seeing when it comes to witches, warlocks, and anything and everything that such mythical figures have ever dealt with throughout the literature that’s been written about them. Sabrina has seemed to finally grow up a bit and come from the pages of the comics into a show that isn’t as bound by the moral and ethical principles that govern what can and can’t be shown to the public concerning witches and witchcraft.

One can easily surmise why this has never happened before though, and that’s because Sabrina has been for a long time a part of a wholesome comic book series that only ever allowed her to practice magic in a positive and constrained manner that was deemed as an okay fantasy for kids since it didn’t get too dark or dingy in nature. But as we’ve seen it today, the show seems to have finally gained the permission to explore the real depth of witchcraft and the darker side of the practice that people have been enjoying in movies and TV for a while now. The fact that she’s unbound though seems to indicate that things are only going to get stranger and even more dangerous as the show goes on, and that the intensity of the story might continue to pick up since as we’ve seen throughout cinematic history witches and the many entities and individuals they deal with are not always the most peaceful lot.

To be honest it’s a nice change. Archie and the gang have been given a different take in Riverdale and now Sabrina has finally been allowed to explore the reality of her own world and the darker side of something that was kept as a cute gimmick for so long. There’s nothing wrong with entertaining children but when you deal in witchcraft and sorcery it tends to make many people think that the cute act needs to be left at the door in favor of allowing adolescents and adults to enjoy the show as well. Things are about to get stranger in season 2, count on it.