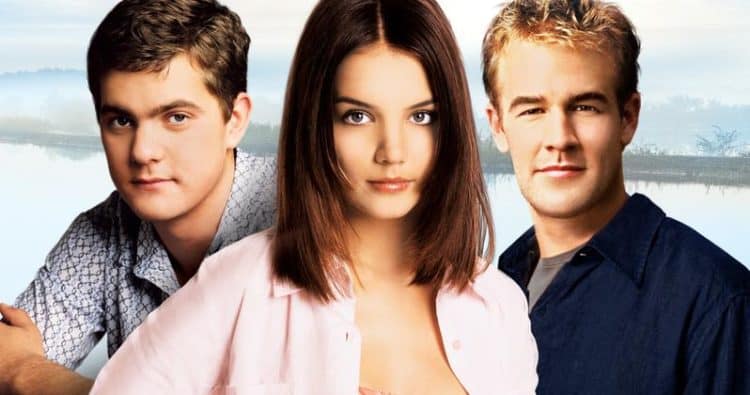 Money. That’s usually what it comes down to when a song disappears from a soundtrack, or a show is canceled, or something else happens in show business. Money is the big reason why Dawson’s Creek, which is now streaming on Netflix, is not being seen with its accompanying soundtrack that so many people started to grow tired of after a while. No offense to Paula Cole, since “I Don’t Want to Wait” is a great song, but hearing it often made it easy to wait to hear the song yet again, as in ‘let’s wait for a few years before we play this song again’. Since the rights to the song still belong to Cole, and she hasn’t been paid for them by Sony, the show will be featured, but it won’t have the same theme that people are used to. For her own part, Cole is ready and willing to lend her song out, for a price. There might actually be some folks out there that are thinking that Cole is being a bit cutthroat since her song has been playing along with Dawson’s Creek for a while, but those same people are typically those that like to be paid for their work and will hopefully understand that artists giving away their work for free is usually best done when it’s in service to a good cause, not just because people are missing the original theme song to one of their favorite shows.

It’s probably a little awkward to hear a different song being used as the opening theme to the show that a lot of people grew up with, but at the same time, it’s not a Greek tragedy since the show isn’t going to change because of it. Dawson’s Creek will still be the same coming of age story that a lot of people remember without hearing Cole’s voice to start the show. Sony likely doesn’t want to pony up the money since the expense is probably going to be more than they want to fork over, which is funny since they’re often willing to push boatloads of money towards other projects that don’t end up going so well, and paying Cole might be seen as a pittance in comparison. But when going through the cost analysis of one project after another it’s hard to say just what the front office is really thinking and why they make the decisions they do concerning anything that bears their stamp of approval. Without having the mind for business that some possess it’s hard to say, but from a consumer and fan standpoint it’s likely that it feels like a minor slight to those that have been watching the show for so long. But as you can guess, people will get over it eventually and remember that being concerned over something so trivial is bound to last as long as they want it to, meaning if they can get used to a different song being used as an opener to the show then it won’t take long to get over it.

Taking a look at the show at this point it’s hard to believe it was so long ago that the main cast managed to entertain an entire generation and became one of the most influential groups of their time. Nowadays each of the actors that made up the core group of this show is still doing their own thing but have been seen to kind of fade in and out of the press, as their work as kids and teens was far more popular than a lot of the roles they’ve taken on lately. Joshua Jackson was great as a kid actor but kind of faded as he continued to grow up, while Katie Holmes, James Van Der Beek, and Michelle Williams were great as teenagers, but kind of started to fade as time went on. To be fair, each of them has been seen in various hit movies and have continued to be successful, but the show was definitely a high point in their careers as it helped to keep them popular and even gave them a huge boost since their characters were adored by so many that it was hard not to see just how important the show was to some folks.

But if anyone remembers, there have been plenty of jokes made about Paula Cole’s song over the years and its relation to Dawson’s Creek since yes, it does tend to get annoying after a while and it does become too much after hearing it over and over and over. But the absence of the song isn’t that big of a deal, and Cole has made it clear that she’s ready to negotiate if Sony really wants the song. But since they own the rights to the song that’s being used now it’s likely that they’ll stick with it.