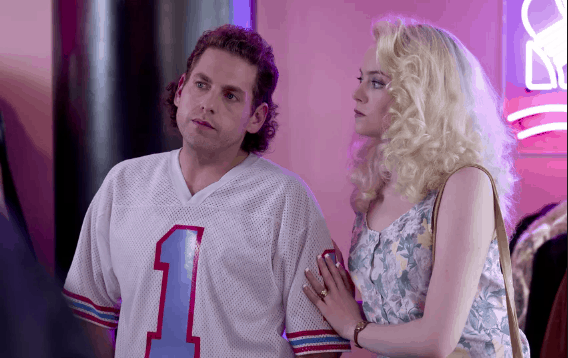 Directed by True Detective’sÂ Cary Joji Fukunaga, the show revolves around the mentally-infirm strangers Owen Milgrim and Annie Landsberg, played by Jonah Hill and Emma Stone. The two take part in a three-day pharmaceutical trial that delves into the depths of the mind. The show explores their memories, imaginations, and fantasies in a series of simulations/hallucinations. At moments, it recalls elements ofÂ Eternal Sunshine of the Spotless MindÂ and Inception–which is a good thing.

But for all of the mindbending warped reality sequences, one of the biggest reasonsÂ ManiacÂ is so captivating is because of the slightly dystopian real-world of the show.

The show exists in a version of New York that is slightly altered from our own reality. Much of the city is the same, but things are shifted just a little to the side. The Statue of Liberty is augmented with the Statue of Extra Liberty, which boasts a pair of wings and holds a spear instead of a torch. Robots have a pervasive, if subtle, presence. One character plays chess against a robot in a park. Small Roomba-like robots automatically remove dog poop from the sidewalk (which Annie affectionately calls “shit-eaters”). But despite the robotic technology all around them, the computers are distinctly outdated, still utilizing monochromatic LCD screens and thick frames that seem to reference an Apple II. Annie’s dad lives in a sort of isolation pod in the backyard, which looks a bit like a prop from Disneyworld’s Space Mountain.

At times, the show looks more like a version of 2018 that was dreamt up by a sci-fi writer in 1985. But a few elements of this dystopia are a little bit too close for comfort.

In one scene, Annie goes to buy a pack of cigarettes and finds that she doesn’t have the money. She asks the cashier if she could pay with an adBuddy instead.

An adBuddyÂ is a living, breathing human who will follow you around and read targeted ads. One character remarks that an adBuddyÂ knew a troubling amount of personal information about his life, including how much money he spent on rent and that he had recently been on furlough.

It’s suggested that adBuddy’s might be collecting information for something called the National Database of Desires–a government-run record of a person’s information and activities. However, it’s debated whether the NDD exists or if it’s just a conspiracy theory.

We know all too much about targeted ads feeling a bit intrusive. You probably know someone who’s mentioned bringing something up in conversation, only to see an ad for the same thing on their smartphone. Just a few months ago, Facebook CEO Mark Zuckerberg testified before Congress regarding just how much personal information Facebook collects on its users. Though he denied that Facebook had any kind of mass surveillance network, many people got very concerned with how to find hidden camerasÂ in order to protect themselves.

WhileÂ the adBuddy and the National Database of Desires might be a little exaggerated, it’s just close enough to reality to make you think about just how flooded we are with advertisements.

It’s a bit absurd, and the scene is played for comedy. But it’s not that far fetched.

The entertainment industry has been teasing virtual reality as the next big thing for decades. Nintendo released the Virtual Boy all the way back in 1995. But VR has always fallen a bit short of the immersive experience promised.

But in the last few years, there’s been a huge jump in VR technology with systems like the Oculus Rift and Vive launching into the consumer market. With modern gaming and video technology, virtual reality seems like it might finally be able to deliver what developers have been saying for decades.

One of the most harrowing elements ofÂ ManiacÂ is how commodified intimacy is in the show’s universe.

Two such products speak to this especially loudly. The first is FriendProxy. If you have plans with someone that you can’t follow through on (or don’t want to) you can hire a FriendProxy instead. This person can be used as a stand-in to take day trips, go to the movies, or even go on dates when you’re otherwise occupied. The other is a Daddy’s Home, where recent widows can order replacement husbands to accompany them during their mourning period.

These services might not immediately remind you of anything in the real world. After all, we’re notÂ quiteÂ that intimacy-starved, right? But that’s not the real-world parallel that I see. Instead, these services are both options that Owen considers applying for to earn some extra cash. They exist inÂ Maniac’sÂ in-universe version our gig economy.

The gig economy has been growingÂ steadily for the last decade. People can already earn money on the side driving around strangers, doing their grocery shopping, walking people’s dogs, or renting out a room in their house. Is it really that far-fetched that someday soon people might be getting paid to fill in for a personal relationship?

WhileÂ ManiacÂ is getting a lot of attention for the genre-jumping, mind-bending alternate realities that take place within the characters’ imaginations, I think that the subtle, unnerving world-building in the show’s universe is where the series reall shines.

Were there any other things inÂ ManiacÂ that struck a chord with you? Sound off in the comments.