Home
Movies
Why We Should All Really Appreciate Batman & Robin 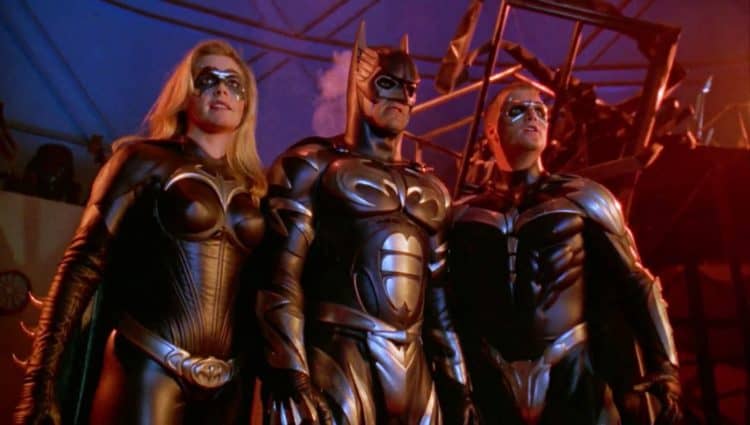 If you ask someone what’s the worst superhero movie, they’ll probably say Batman & Robin. I mean, can you blame them? Why, Joel Schumacher? Why did you give us this cesspool of a movie? It’s a well-known story by now, but Schumacher basically blamed the studio for pretty much everything. According to him, it was basically a corporate movie, because toys, toys, and more toys. Makes sense, but then again, what in the holy name of Batman was with all of those one-liners?! Okay, we love Arnold Schwarzenegger, but seriously, way to kill a tragic and popular DC villain. As for George Clooney, he was, well… just George Clooney. Nothing special, but we’ll always remember him for the bat nipples. Oh, and let’s not forget about Chris O’Donnell as Robin. He did his best, but his enthusiasm was there. The man deserves credit for that at least.

Oh, and the less we talk about Uma Thurman’s Poison Ivy, the better. I suppose we should bring up Alicia Silverstone’s Batgirl, only because that was the character’s first live-action appearance. Well, that’s all the more unfortunate, because her version was just bad. Honestly, I barely remember her. I know I’m not the only one, so I won’t feel bad. However, there was one scene in the movie that gave it a shred of redemption. Poor, old Alfred was dying and seeing the whole Batman family flock to his side was a surprisingly touching scene. Other than that, the film was pretty much dumpster juice.

What else is there to say about Batman & Robin? Well, the film is all kinds of bad, but there’s something strikingly special about it. Special enough that it reminds us that we should all really appreciate it a lot more than we realize. No, certainly not for the quality. Oh, and also not for the toys that the movie sold, because honestly, who really liked the character designs? You want to hear a real shocker? Warner Bros. didn’t plan on stopping bat-nipple George Clooney after Batman & Robin. Oh yeah, that’s right. We were all supposed to see Clooney return as Batman for another bout, but thankfully, it didn’t happen.

Why didn’t happen? The answer is simple: money. Batman & Robin flopped (no surprise), and any plans for a sequel with Schumacher and Clooney were scrapped. Wait, there was a plan after Batman & Robin?! Yes, it’s the truth. Ever heard of the Batman movie called Batman: Unchained? Well, neither has anyone else, because it doesn’t exist. If Batman & Robin succeeded, this supposed Batman movie would’ve become a reality. Based on what I’ve read, it would have involved Batman fighting the Scarecrow and Harley Quinn. The big curveball was that the Harley Quinn they had in mind was going to be the daughter of Jack Nicholson’s Joker. I mean, not that it’s a terrible idea, but if they didn’t have Michael Keaton as Batman, then what would’ve been the point? Probably just selling more toys.

Needless to say, it’s a good thing that Batman: Unchained never saw the light of day. However, we all need to look at the bigger picture here. Not seeing another silly Batman movie wasn’t the only thing we got out of Batman & Robin flopping. On the contrary, the failure of Batman & Robin spawned the beginning of something that gave Batman some new life. If you’re a Batman fanatic like me, you know what I’m talking about. After the failure of Batman & Robin and unable to move forward with Batman: Unchained, Warner Bros. decided to reboot. The result was a little 2005 film called Batman Begins, starring Christian Bale and directed by Christopher Nolan. At that point, it became less about toys and more about quality.

I won’t gush about the Dark Knight trilogy too long, but honestly, we all owe its existence to the failure of Batman & Robin. What did the trilogy do for the entire superhero genre? I give it credit for elevating it to a more gritty and crime thriller realm, especially The Dark Knight. Batman Begins and The Dark Knight Rises had the more traditional superhero element to them, but the difference between them and other superhero movies is that they both showed Batman in a light we’ve never seen him before.

Batman Begins gave us the in-depth origin story that showed us where Bruce Wayne was traveling all those years to train for his upcoming career as a vigilante. The Dark Knight Rises gave us that physically broken Batman who was at his most vulnerable, but managed to win in the end. Not only that, be he also managed to find peace in the end. When does Batman ever get a happy ending?

But it doesn’t stop there. The Dark Knight trilogy is over with, but Batman is still kicking it on the big-screen. After Christopher Nolan had his fun, Warner Bros. brought Zack Snyder aboard to introduce a new Batman played by Ben Affleck. This is the Batman of the DC Cinematic Universe. He’s big, he’s dangerous, and unlike Christian Bale’s Batman, Batfleck belongs to a bigger universe. Why did Warner Bros. attempt something so ambitious? Well, other than to compete with the Marvel Cinematic Universe, DC got their chance due to the success of their most previous and successful Batman franchise. If the Dark Knight trilogy didn’t succeed, then we wouldn’t have the DCEU. Yes, Nolan’s movies were their own thing, but they planted the seed for a much bigger plant.

And guess what? We owe it all to the possibly worst superhero movie ever. Hate on it all you want, but don’t say it never should’ve happened. To be honest, you can find some enjoyment in it. In my opinion, many of the one-liners are funny and the cringey acting is so cringe it can actually make you laugh. In short, it’s one of the best so bad it’s good movies of all time. It’s a guilty pleasure if you want to sit back and have a laugh. If you’re a Batman fanatic like me, don’t get too upset that it pretty much defecated the character. Just watch it as a terrible film that was never meant to be taken seriously. Joel Schumacher admits it, so don’t fret.

In the undeniable end, you have to accept that Batman & Robin paved the way for a much better Batman movie franchise. If you didn’t buy the toys, you certainly bought the tickets for Batman Begins. What else can I say? Thank you Batman & Robin for indirectly giving us Christopher Nolan’s movies and the DCEU. Your failure was our greatest gift.