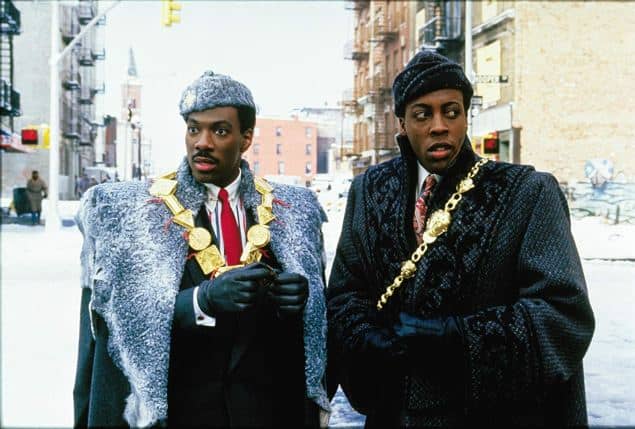 I generally don’t like to say that I ‘won’t ever’ watch a movie, and it might not hold true in this case either, but at the moment it’s likely that I’ll pass on Coming to America 2. There are a few reasons why and they’re pretty obvious unless you’ve never seen the movie and have no idea what I’m talking about. Of course if you’ve never seen the movie then it’s possible that you weren’t born yet, were too young to even know about it, or just didn’t care enough to watch it. In any case you might not care to read this but Coming to America was, in its own time, a great film and while it wasn’t all that intellectually stimulating it was pretty funny and told an engaging story about a young prince that made his way to America in order to try something new and find the kind of love that he didn’t feel in his home country.

It does seem that River Donaghey from Vice and several others are excited for it since the movie is bringing back several of the original characters from the original and Prince, perhaps even King, Akeem and Semmi will be making another trip to America. This time however it sounds as though Akeem will be looking for a long-lost son, which begs a few different questions when it comes to the original story. Where is his princess, or queen? Did he fool around when he was in NYC and no one said anything? Did he fool around before leaving for America? There’s a lot that has yet to be explained when it comes to the story but it also seems as though the film has been delayed a bit which means that we might have to wait a little longer. Russ Burlingame of ComicBook has indicated that while it’s still bound to come out in 2020 it’s been pushed from its August release date back to December. Honestly it should have been left on the back burner and not considered at all. Does that seem harsh? Well, at least it’s honest since to be fair the first movie seems like it was wrapped up neatly and didn’t need to be inspected for an angle that could be used to create a sequel.

Why you ask? That’s a simple one, because an unnecessary sequel can destroy the allure of the movie it was spawned from. It’s not just horror movies that produce bad to outright horrible sequels, other movies can be just as bad if they’re not handled with care or given the kind of respect they deserve. After all, what’s next, another King Ralph? Or maybe they want to drag in Chevy Chase and Beverly D’Angelo for another Vacation movie? It’s not just that some of these folks are getting old and hard to recognize when it comes to making sequels, it’s that their movies were wrapped up years ago and should have been left to remain as the archived bits of gold that they’ve been seen as. Of course back in those days not everything was as PC as people would have liked to see it (thank goodness) but it was funny as it was and it allowed us the idea that humor was, is, and will likely always remain a way to deny the hold that some of the darker aspects of life have on us. Coming to America could have been a very depressing movie if not for the comedic aspect of it, but trying to gain that same feeling seems like it’s going to end up falling a bit flat unless you’re so into the comedy of today that you think it’s the best thing that’s ever come along.

You might wonder why I’m being so cynical towards the very idea of this movie, but there is a reason. The type of comedy that was rampant back in the day when this film was created versus the type of comedy that people enjoy now is different no matter what people think. It’s more constrained, it has to factor in the PC aspect even if it doesn’t use it, and it definitely walks on eggshells at times around certain audiences when back in the day if a person didn’t like the comedy they were invited to just leave and get over it. Nowadays if people don’t like a movie or an act they’ll gladly put it on blast and convince a hundred or a thousand other people to feel the same way through whatever means possible. That goes for getting people to believe that something’s worthwhile as well. In this case I’d gladly advocate for people thinking for themselves at this point when it comes to watching this movie. Don’t listen to anyone else, don’t even take this article into account, just remember that comedy back then versus now has changed and make up your own mind.