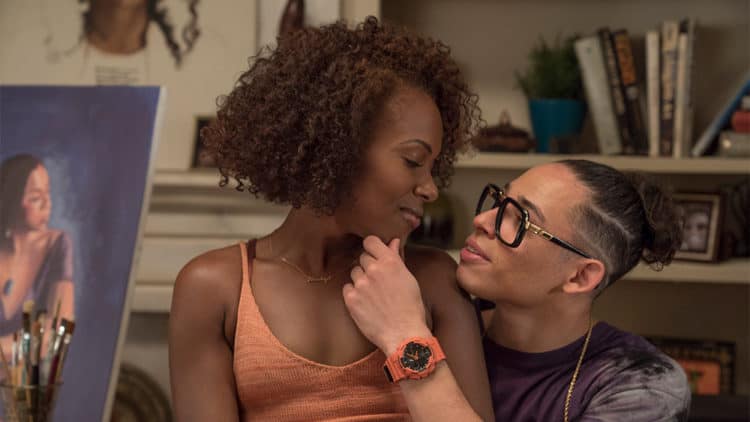 She’s Gotta Have It

The incomparable and riveting DeWanda Wise does an outstanding job in this series based on the movie of the same name. If you missed the first two seasons, then it’s about time you caught on and caught up. If you need to laugh, cringe and cry in a five-minute span, then She’s Gotta Have It needs to be on your watchlist. The writing and cast in this show are commendable, and despite some occasional controversial hiccups, you’re missing out if you aren’t already watching.

Nola Darling faces her share of troubles from the very beginning. In this fourth wall breaking show where characters do monologue asides for the audience to explain their motivations, you’ll find a lot of bold insights into the way different people think. At the outset, Nola talks about being objectified. The whole season is about perceptions, hers and those of other people.

The first season centers around Nolas struggle to establish herself as an artist and maintain her sexual independence. The three men, and one woman, who she dates all want more from her. No one embraces her sexuality, and after she is accosted, the men especially try to further repress her in an ill thought out attempt to keep her safe from something that has already happened.

She reacts to her trauma with art, therapy, and life changes. While she clearly still struggles with the internalized pain, she also takes a lot of it out on people around her. Nola shows her flaws most with her own self-centered reactions to people. She lets friends down, avoids commitment like the plague, and even buys a painting from another artist and friend named Papo in the worst way. He is homeless and an old friend from school.

After he offers to walk her safely to her destination one night, she insists on buying his upcycled art and tells him he was the most talented person in their school. Yet after hearing his life story, about his inability to pay rent and child support leading to his situation, she gives him ten dollars for his art while asking thousands for her own.

In and out of love, Nola’s struggles lead her to take a job at a school. She teaches art to the at-risk youth and pays out of pocket to bring them art supplies. Her employer Raqueletta Moss, who speaks in the third person as a coping mechanism for her own traumas is one of the more amusing and tragic additions. Nola is a great teacher, but as an employee, she is a bit of a problem case, and Mrs. Moss feels that art is counterproductive to the sexual traumas the children have suffered that makes them ‘at risk.’

The season ends with more than one type of trouble centered around an art show Nola Participates in with some other, far more experienced artists. They heckle her about her lack of art world knowledge. An art critic reviews her badly because her distraction at having all her lovers show up uninvited leaves her grasping to say something coherent or intelligent about her art.

Since season two has just dropped, we hesitate to spoil any of it. However, we will say that it moves away from the romance-heavy plots and tries for more character development in other ways. You’ll have to catch up and watch it yourself.

Though you never really need an ‘excuse,’ to watch Spike Lee’s work, there’s a lot going on in She’s Gotta Have It to love. Though we enjoyed the show immensely and could extoll its virtues for days, we’ve narrowed it down to just a handful of the reasons why you should be watching the show. Much of it boils down to the casting and writing. It’s the character portrayals that truly shine.

As controversial and bold as it is hilarious, She’s Gotta Have It is unabashedly irreverent. If you feel some subjects shouldn’t be discussed, and they are somehow sacred, or conversely dirty and unmentionable, this isn’t the show for you. For everyone else, the warm and joyful blend well beside the harsh and horrible. The cast brings this excellent show to life deserve to get some form of award for their spectacular work. We will keep our fingers crossed for a third season. In the meantime, now that we’ve finished bingeing season 2 we plan to go back and watch it all again from the beginning. Care to join us?