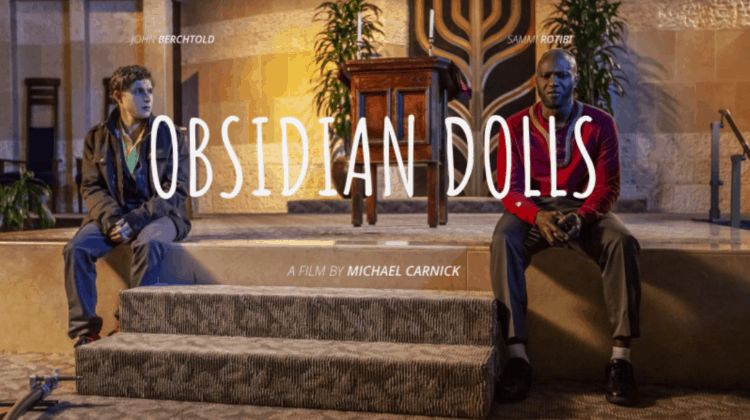 Michael Carnick’s latest film, Obsidian Dolls, tells the story of an Ethiopian-born rabbi, Nate (Sammi Rotibi), as he’s approached by a troubled young man, Isaac (John Berchtold). Isaac tells Nate that he wants to end his life, but before that, he wants Nate to recite the Mourner’s Kaddish for him. But Isaac’s life is ultimately saved by the rabbi’s counsel, and the limitless strength of what it means to be a part of a loving community. Carnick is known for his very raw storytelling, he was the writer of 2016’s Who’s Driving Doug starring RJ Mitte and Daphne Zuniga. Before the film hits the film festival circuit, we sat down with Carnick and dissected the film with him.

-What would you say are the core elements of Obsidian Dolls?

-If you were to compare Obsidian Dolls to another previous film released, what would that be?

I tried to present the film as a cinematic stage play. My models were primarily HBO’s adaptations of Angels in America and Wit, and the Henry Fonda Twelve Angry Men. Those films were brilliantly adapted to the cinematic space while keeping the magical realism of watching of a live performance.

-What do you think Sammi Rotibi brought to the character of Nate that other actors you considered for the part couldn’t have?

To be perfectly honest, I didn’t consider any other people besides Sammi. I saw his work and knew he was right. It was something in my gut. It sounds a bit like voodoo, and it kind of is. Sometimes you look at a ton of rehearsals before you settle on someone, and sometimes an actor just clicks. Fortunately, Sammi liked the material, and he brought a whole new level to the production. He was dedicated and hardworking, and truly talented. There was tons of monologues to remember, and some were in Hebrew.  He never faltered, though. He was so intent on getting things right. I was truly blessed.

-Is there a particular director that inspired you to want to get in this field?

Screenwriters have primarily been my inspiration to get into filmmaking as a whole. Alan Ball and Terrence Winter are amazing writers that create with raw, realistic character landscapes. Charlie Kaufman is brilliantly twisted and can capture the comedic darkness of the mind like few others. And I owe a lot to Tony Kushner. Angels in America is probably one of the greatest stage plays (and miniseries) in the last 20 years.

–Obsidian Dolls is heavy in dialog. How much did the script change when the actors did their run through and filming began?

I’ve always believed in trusting actors. Placing them first. I told Sammi Rotibi and John Berchtold that they had to feel like they knew the characters better than me. I encourage improv and play, but both actors stayed pretty on script. Oftentimes they’d have questions about lines or meaning. I’d try to answer in a way that informs them of how this is how your character feels. Sometimes I’d email them with paragraphs of backstory the night before filming. I’d say these are the things to led to this point. What you do with that exactly is up to you, as long as we agree on an endpoint. You’re the people living these bodies. Actors are in a way writers too, so it’s all a collaborative process. Sometimes something didn’t feel right to either Sammi or John, and we’d talk things over and make some adjustments. And we always have multiple takes. When we hit gold, we went with that. But there was a lot of raw emotion involved. A lot of fleeting moments of humanity. The trick is to try to capture it all and hope it survives editing.

-What festivals would you love to see this film play at?

-You also wrote the film Who’s Driving Doug, which premiered at the Santa Barbara International Film Festival and was later released by Filmbuff. What was your favorite thing to read about what critics/audiences were saying about the film?

In school I often joked that I’d know I really made it once I got my first negative review. If that was the metric for success, then I guess some critics delivered. The fact that a tiny indie film with a micro budget was on some pretty big review sites was cool to me, even if some were kind of punching down. Audiences and people have generally responded well, especially those that had loved ones with disabilities or were disabled themselves. Lots of personal messages on social media from individuals thankful that I was showing a “real” disabled character, not some cinematic fantasy or glorified “illness porn.” When the film was screened at UCSD as part of their disability awareness, one mother from the audience was brought to tears in the Q&A over the memory of her deceased son and how it reminded her of him. This was a very touching and humbling moment, and I was extremely empathetic for the mother. And I was glad my film could bring some solace, even if a little. It was a night I won’t forget.

-On the Who’s Driving Doug Wiki page, it says the film is not strictly autobiographical about you. What experiences in the film did you go through?

In one particular scene, the titular Doug and his companions go to a diner, but the waitress refuses to address Doug directly when taking his order because she assumes he can’t think for himself since he’s in a chair. This kind of thing happens to me all the time, and it’s really dehumanizing. I got so many messages from disability people saying that that same thing happens to them constantly! At least I know it’s not personal.

-Do you have any idea what your next project will be?

I have a short documentary in post and a short film in pre-production. Loads of scripts ready to go, but one day at a time in the year of Covid.