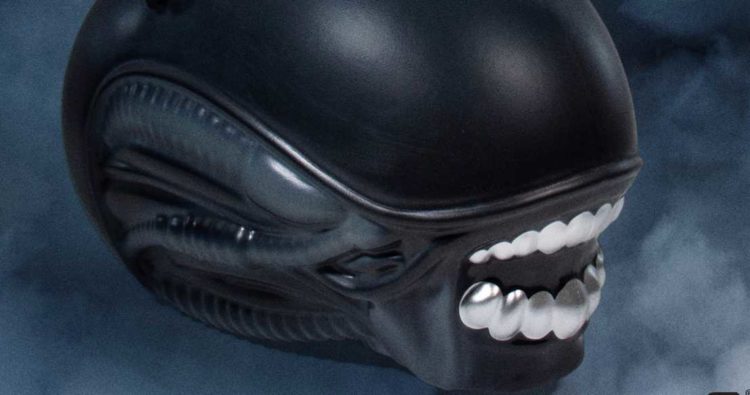 Alien enthusiasts can start getting ready for Halloween with this impressive-looking bucket according to Kevin Burwick from MovieWeb, or they can at the very least put it up with their collection if they have one since it’d be hard to pass up on this impressive piece of work. The only thing that would make it better would be if the mouth really opened and shot forth a tinier mouth that could be used to clamp on a piece of candy. Of course given the propensity for misuse that such a thing would garner it seems safer to just keep it as it is. The only thing it seems that would make this stand out any further is if a kid came up dressed as a xenomorph, a predator, or a Marine from the Aliens movie, though it would seem that only two of those costumes might be readily recognizable to a lot of people. It’s amazing to say, but this image is what the franchise is known best for since the movies and the books are only followed closely by those that have continued to be interested in the franchise for many years now.

There are quite a few people that know at least something about the xenomorphs, and while Prometheus and a couple of other movies have tried to explain their existence throughout their long history, it’s still been kind of muddy since quite honestly they seem as though they were a bio-engineered species since not only are they able to survive in extreme conditions that would kill most organisms, but they’re also so extremely deadly that even killing them presents a problem. From sharp claws to powerful jaws to strength that is greater than most any human to tails that can cut people in half, the xenomorphs are pure killing machines that are only susceptible to those that have a serious tendency to get violent and are smart enough to do so from a distance. The predators of course hunt these things as we’ve seen in the movies such as Alien vs. Predator, but they’ve been doing so for so long that they’ve learned how to combat the creatures in a manner that doesn’t cause intense personal damage, and they’ve even made the process into a routine hunt that allows their warriors to prove themselves. Of course there have been times when they’ve had to nuke everything when the xenomorphs get out of hand, but that’s just a part of the story.

The xenomorphs have been part of Halloween and popular culture for a while, though you’re likely to see them more as part of the latter than the former since a few of their more curious qualities have etched themselves into the minds of the public thanks to how unusual they are. Acid for blood, a set of interior jaws that can punch through a skull, and of course the manner in which they’re ‘born’. The chest-bursting scene has been a longstanding favorite moment of many since it was so unexpected and so iconic that it’s been referenced throughout the decades in a big way. From Spaceballs to Avengers: Infinity War that simple reference has been used over and over again simply because it’s so great and so horrifying that people just can’t get away from it. The xenomorphs have been highly popular creatures that are pure nightmare fuel and yet have given rise to a number of copycats throughout the years as well as attempts to replicate their success. Of course if not for having a couple of the greatest enemies to work against the xenomorphs might have faded out a long time ago since as scary and as awesome as they are, they can be wiped out, and as a result they breed in large numbers and tend to swarm their opponents. Only in a few cases in the movies has it been seen that they’ve taken on an enemy they didn’t account for.

One is pretty obvious, the predators. The two races were going at one another in the books and comics before they were seen to brawl on the big screen, but the predators have a long history with the creatures, and tend to use them as well as battle them on various occasions. One could say that humans in general are their next biggest enemy, but that would be a yes and no scenario since a lot of humans have been taken out by the creatures quite easily while some have gone down with a fight. Ellen Ripley is undoubtedly one of the biggest threats that the race has ever faced since she would gladly wipe every last one of them out thanks to her history with the creatures. If a kid could somehow replicate a costume that could be recognized as Ripley then this bucket would seem like a fine addition indeed.