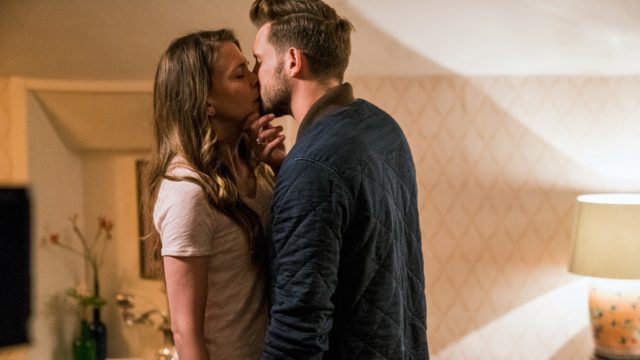 The one thing we can say with certainty about Younger‘s fourth season finale is that Liza is most definitely not in love with the situation at hand. Show me a woman who is happy to attend her ex-boyfriend’s wedding barely a few months after they’ve broken up. I dare you. This is after Liza’s emotional confession last week that she was completely in love with Charles. So what happens when an ocean is put between Liza and Charles, and our heroine ends up in a beautiful foreign country on the verge of losing the other man in her life once and for all?

The one thing you have to admire about Liza’s relationship with both of these men is that amidst all of the drama they’ve gone through, everyone’s tried (I say tried, not always succeeding) to be mature. At least Liza and Charles can work together amicably. Words cannot express what a colossally bad idea it was for Zane to come to Empirical. Healthy competition between publishing houses is one thing, but that type of competition within the same workplace, on the same floor, is disastrous! He is completely childish about it too. He goes out of his way to one-up Kelsey, only to blame her when he crosses the line and puts Charles in an uncomfortable position in a Good Morning America interview. I am so proud of Kelsey for the way she handled him, and it’s a testament to the writers writing strong female characters. The Empirical women are not whiny, they are not cold, and they are not pushovers. Just as Diana proved her self-worth by kicking Richard to the curb, Kelsey reminded Zane that she’s simply doesn’t have to compete with him on his level. Being the youngest woman in New York City to have her own imprint, and produced two best sellers to boot, Kelsey is way above Zane! Zane needed that reality check, and it would be nice if someone gave Pauline one too on the true state of her marriage.

Across the pond, things were much more emotional. While I may have seen Josh and Claire’s nuptials coming a long time ago, Liza is shocked to be woken at 5 o’clock in the morning by her ex to be invited to his wedding in Ireland. Yes, it’s awkward, but does anyone really turn down a trip to Ireland? Though Liza and Josh agreed to be friends, and Liza introduced Josh to Claire, things get emotional fast. I really liked Claire, right up until the moment she asked Liza to lie to Homeland Security about how long she and Josh have been dating; her motivating argument being that she owed Josh for keeping her secret. This was wrong on two fronts. The first is that, as with any request, it’s not what you say, but how you say it. Secondly, what goes on in a relationship between two people should stay between those two people. It’s not Claire’s place to tell Liza about her relationship with Josh, and it wasn’t fair for Josh to clue Claire into that. The deeper reason all of this isn’t good is because of all the people in the world Josh could ask to lie for him, he chooses Liza, solely because he knows she can lie. The sad thing is, he isn’t wrong. But you can tell that the subconscious part of him needed Liza in Ireland for a different reason. After a few drinks, and a close save by Liza, Josh ends up in her room. He can’t get over Liza. Nothing happens other than a kiss, but they still share that kind of intimacy that even being close to one another could be considered cheating. Josh doesn’t bother denying how deeply they are connected, only realizing that if he is ever going to break the cycle, he has to put something big between them. A wedding ring would certainly do that. Wouldn’t you know one of the most beautiful ceremonies in one of the most beautiful places in the world just had to be the most heartbreaking?

All in all, the entire trip was worth it to watch Maggie get stuck in a bog! It was even more worth it to see Maggie bond with Claire’s mom over very phallic art, and then some! Maggie’s always good for a laugh, but the wordless, emotional support she showed in this episode was outstanding.

Younger will return for Season 5 in 2018. Will Liza finally make a choice, or has life made the decision for her?

Just when you think Younger’s love triangle is settled, Liza’s love takes a turn in the Season 4 finale.